High levels of corn and soybean production in 2016 have led to low projections of commodity prices and returns for 2017. Had more normal yields occurred, the 2017 return outlook could have been different. A $.50 increase in corn and soybean prices results in near financial stability on many farms.

Much of the reason for these low 2017 projected returns are very low commodity prices. Low commodity prices are the result of high levels of total U.S. supply (farmdoc daily August 22, 2016). In its August Crop Production report, USDA projects total U.S. corn production for 2016 at 15.2 billion bushels, an all-time high that is 6.5% higher than the previous high occurring in 2014. Similarly, U.S. soybean production in 2016 is projected at an all-time high of 6.1 billion bushels.

Lower 2016 production likely would result in higher commodity price projections. In June before high yield levels became to be expected, reasonable estimates of 2017 prices were $4.00 per bushel for corn and $9.50 per bushel for soybeans. At those price levels, farmer return using budgets in Table 1 would be $39 per acre, $67 per acre higher than returns projected at $3.50 corn and $9.00 soybean prices. 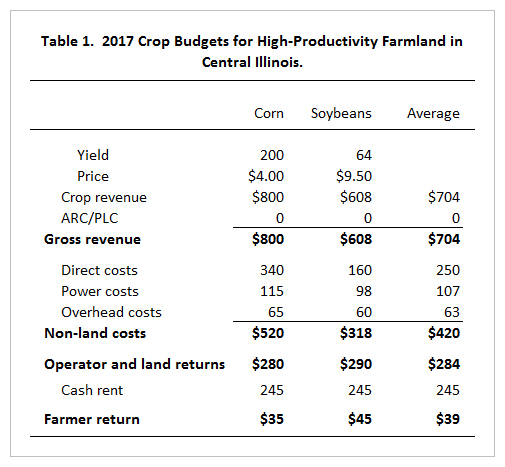 Higher corn and soybean prices could result from changes in a number of factors impacting either supply or demand. While there are many possibilities, one of the more likely sources is reduced yields in a major crop producing region.

Predicting when reduced yields will occur is difficult, as there is no reason to expect poorer yields to occur at this point in time. Low yields could occur in 2017. Alternatively, 2017 could be another year with above trend yields, resulting in continuing low prices. It is even possible that U.S. yields could be higher in 2017 than in 2016. The differences from trend yields have been higher in the past than what are currently projected for 2016 (farmdoc daily August 12, 2016). It is somewhat sobering to think about the price impacts of even higher national yields. All of this is to say that low prices that began in late half of 2013 could extend several more years into the future. Given this possibility, continued cost cutting seems prudent.

The silver lining of cost cutting is that it will result in profitability when prices do rise in the future. Given the budgets in Table 1, a $4.00 corn price and $9.00 soybean price results in returns somewhere near a stable level: Farmers would not be building financial position but serious erosions in financial position also would not occur.

The one caveat to the above silver lining is that cost cuts do occur. Built into 2017 budgets are cost decreases. From 2016 levels, non-land costs for corn are projected to decrease by $27 per acre and cash rents are projected to decrease by $22 per acre. If these reductions do not occur, losses could be much larger in 2017 and needed commodity prices to reach financial stability would be higher.

Irwin, S. and D. Good, "Some Perspective on the USDA's August 1 Corn and Soybean Yield Projections." farmdoc daily (6):153, Department of Agricultural and Consumer Economics, University of Illinois at Urbana-Champaign, August 12, 2016.