Recent USDA reports confirmed large corn and soybean crops for 2016 (see farmdoc daily August 15, 2016). Large 2016 production leads to low projected corn and soybean prices for 2017. Given low prices, projected 2017 returns will be very low. Even after substantial decreases in non-land costs, many farms will have projected losses in 2018 on cash rent farmland. For farmland with an expected corn yield of 200 bushels per acre, cash rents would have to be below $218 per acre before farmers would be projected to have a non-negative return. A $218 per acre rent is well below current, average levels of cash rents.

Table 1 shows 2017 budgets for high-productivity farmland in central Illinois. The first column is corn, the second is soybeans, and the third gives an average for corn and soybeans. These budgets represent projections for averages across many farms with high-productivity farmland. Historical values for these farms are summarized from Illinois Farm Business Farm Management (FBFM) data and made available in a publication entitled “Revenue and Costs for Corn, Soybeans, and Wheat, and Double-Crop Soybeans“. Points concerning 2017 budgets are: 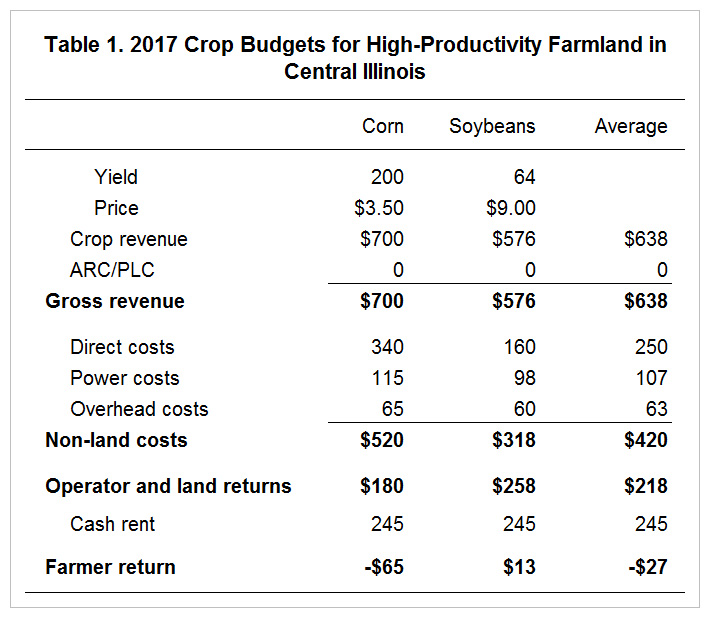 Even after substantial decreases in costs, more reduction in non-land costs and cash rents are needed if farmers are expected to have non-negative returns on cash rent farmland. High 2016 production leads to low prices which causing a further need to cut costs in 2017.

Schnitkey, G. "Corn and Soybean Revenue Projections for 2016 and 2017." farmdoc daily (6):145, Department of Agricultural and Consumer Economics, University of Illinois at Urbana-Champaign, August 2, 2016.