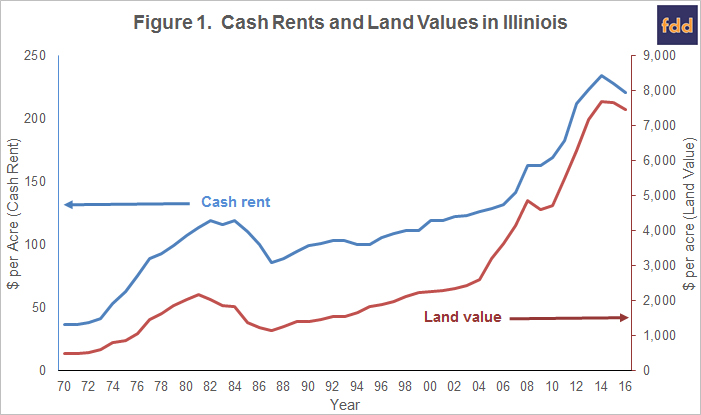 Corn prices received by farmers averaged $5.07 per bushel in 2010, $6.24 per bushel in 2011, and $6.93 per bushel in 2012. Since 2013, corn prices have been below $4.00 per bushel most of the time. This fall in corn price corresponded to decreases in other commodity prices, and led to per acre revenue being below per acre costs, resulting in the need to reduce costs by about $100 per acre (farmdoc daily September 1, 2015). Some progress has been made in reducing costs: 1) fertilizer prices decreased in 2016 (farmdoc daily June 28, 2016) and 2) capital purchases were reduced which will cause reductions in machinery depreciation over time. Decreases in average cash rents in 2015 and 2016 also aided in reducing costs.

Still, reductions in costs occurring up to this point do not result in costs being below revenue. Therefore, a continuing need to cut non-land costs and cash rents exists. Recent declines in commodity prices lead to low revenue projections for both 2016 and 2017, further aggravating the need to reduce costs (farmdoc daily August 2, 2016 ). On average, cash rent decreases in the future must be larger than the $12 per acre decrease that occurred during the last two years if costs are to be below revenue.

Cash rent reductions along with continuing prospects of low agricultural returns likely caused lower land values. Up to this point, however, land value decreases have been modest.

Higher or rising interest rates likely would have caused a larger decrease in land price. Instead, interest rates on debt instruments have been low. Take yields on ten-year constant maturity Treasuries as an example. Yield on these notes trended downward since 1987 (see Figure 2). From an economic standpoint, decreasing yields put upward pressures on land values. In recent years, Treasury yields have been very low. Ten-year constant maturity Treasury yields averaged 2.5% in 2014 and 2.1% in 2015. Yields for the first six-months of 2016 were 1.8%, below the 2014 and 2015 levels (see Figure 2). 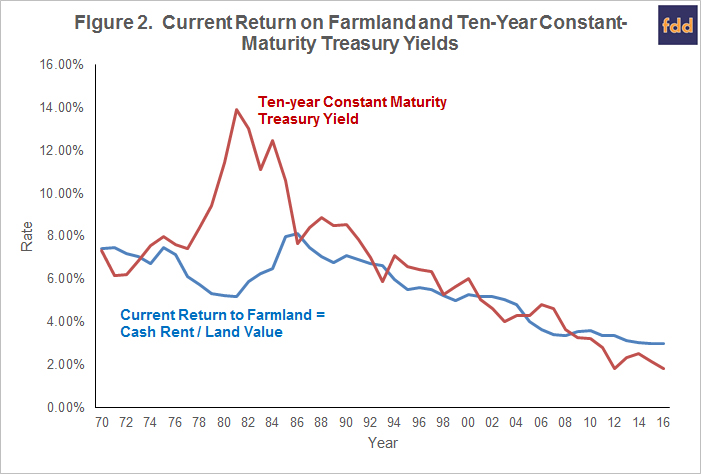 Schnitkey, G. "Corn and Soybean Revenue Projections for 2016 and 2017." farmdoc daily (6):145, Department of Agricultural and Consumer Economics, University of Illinois at Urbana-Champaign, August 2, 2016.