While considerable uncertainties still exist, revenue projections for 2016 and 2017 are provided in this article for the average of high-productivity farms located in central Illinois. The 2016 revenue projections provide an indication of whether 2016 will be a better or worse income year than 2015, a year in which net incomes on many grain farms were extremely low. The 2017 projection provides information useful when making cash rent, input purchase, and crop choice decisions for 2017. Overall, revenue for 2016 likely will be lower than in 2015. Continued low revenues should be expected for 2017, meaning that cost cutting must continue.

Gross revenues will be projected for high-productivity farmland in central Illinois. To provide context, historic returns for the years between 2009 through 2015 are given for corn (see Panel A of Table 1) and soybeans (panel B). These revenues are summarized from grain farms enrolled in Illinois Farm Business Farm Management. They represent averages across many farms, meaning that some farms have higher and some farms have lower revenues. Historical values are taken from a publication entitled Revenues and Costs for Corn, Soybeans, Wheat, and Double-Crop Soybeans. 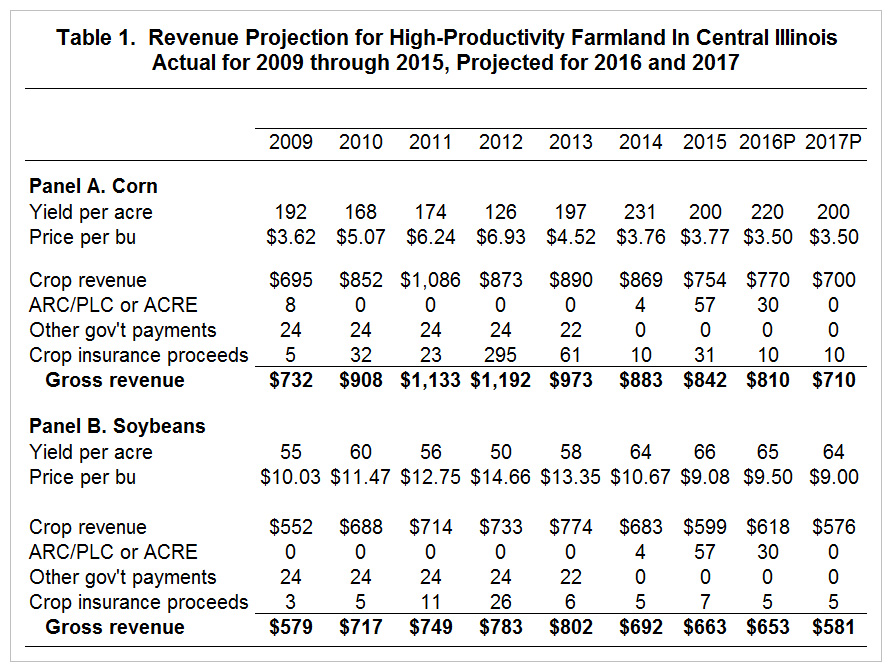 Table 1 also shows projected gross revenue for 2016. Panel A gives projections for corn. At this point, yields in Illinois appear to be excellent (see Nafziger for a discussion). As a result, a 220 bushel per acre yield estimate is used for 2016, which is below the record-setting 231 bushel per acre average in 2014.

Crop insurance proceeds are projected at $10 per acre. At the current time, December corn contracts are trading near $3.35 per acre, well below the $3.86 projected price. Given a harvest price of $3.35, yields slightly below guarantee yields would trigger payments at an 85% coverage level. However, yields likely will be above average on most farms, resulting in no insurance payments. Still, a small crop insurance payment is built into revenue projections to reflect the fact that some farms will have poor yields.

Gross revenue for corn is projected at $810 per acre in 2016, down $32 from the $842 average for 2016. This suggest a continuation of low incomes, particularly for farms that were unsuccessful in cutting costs.

There is some optimism that yield could be higher than the 220 bushel per acre average in Tables 1. It is not likely that higher average yields would result in higher revenues. Higher yields would result in reductions in ARC payments. Moreover, average price likely would decrease if yields were higher. All these suggest, that high yields will not take Illinois farmers out of a low revenue situation.

Soybean projections for 2016 are shown in Panel B. At this point in time, considerably more uncertainty exists about soybean yields than for corn. However, it seems reasonable to expect above trend yields. A 65 bushel per acre yield is used for the 2016 yield. A $9.50 price results in $618 per acre of crop revenue, slightly above the $599 per acre average in 2015

No ARC-CO payments are projected for 2017. The benchmark prices for corn and soybeans used to calculate ARC guarantees are declining. Trend yield and 2017 forecast prices will not trigger payments.

Corn gross revenue is projected at $710 per acre, down from $100 acre from the 2016 projection. If the 2016 and 2017 projections hold, a continuing pattern of revenue decreases will exist since 2012 (see Figure 1). Price decreases contributed to this revenue decline. In 2012, corn price was near $7.00 per bushel. Corn prices have been below $4.00 since 2013. For 2016 and 2017, prices continued lower to a projected $3.50 per bushel average. Moreover, reduced revenue is projected because of lowering ARC payments. 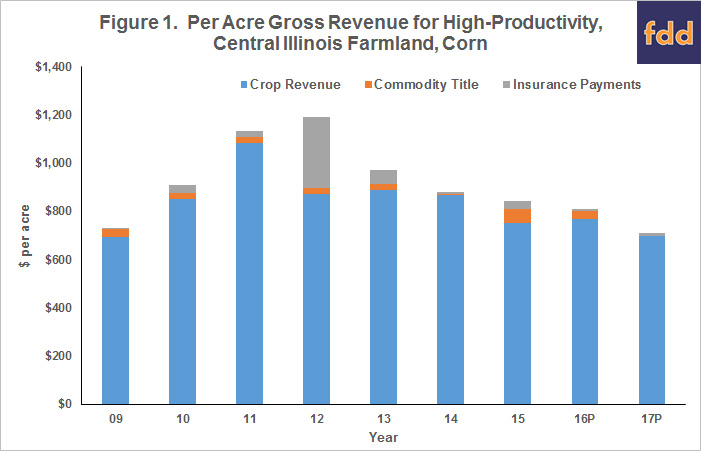 Soybean gross revenue is projected at $581 per acre, down by $72 from the 2017 level. Gross revenue for soybeans has been on a downward trend since 2014 (see Figure 2). Prices were above $13.00 per bushel in 2011 and 2012. Soybean prices have decreased to levels below $10 per bushel, with a $9.00 per bushel projection used for 2017. Reduction in commodity title payments also play into lower gross revenue projections. 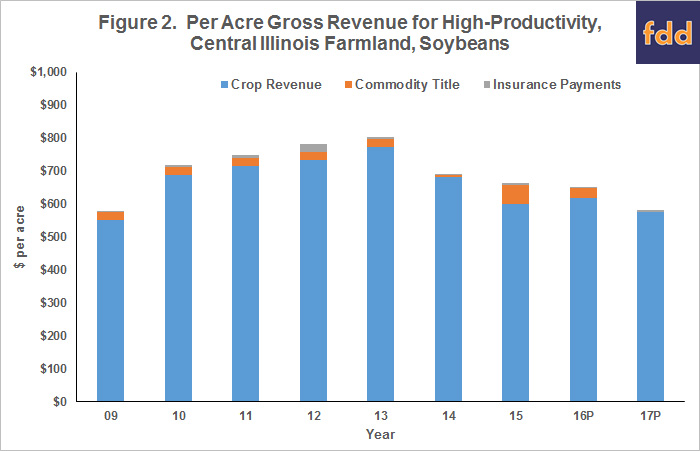 Much can happen to cause both prices and yields to change from the 2016 and 2017 projections shown here. For example, options markets suggest considerable variability in the price of the December 2016 Chicago Mercantile Exchange (CME) corn contract, with a 12% chance the December contract having a price above $4.00 per bushel, and a 20% chance that the December price will be below $3.00 per bushel (see farmdoc daily July 28, 2016).

Even given this uncertainty, it seems reasonable to expect another low income year in 2016. Revenue likely will be down from 2015 levels. Lower revenue could result in lower 2016 net incomes if farmers did not cut costs sufficiently to cover revenue decreases. Revenue projections shown above are for the average of central Illinois on high-productivity farmland. Some farms will have lower incomes and some will have higher incomes. Those farms that have lower yields will tend to have lower incomes, and vice versa.

When making 2017 decisions, it seems prudent to expect low revenues into 2017, with a fairly good chance that revenues will be lower in 2017 as compared to 2016. Hence, there will be a continuing need to cut costs, particularly for those operations with low amounts of working capital.

Sherrick, B. "Implied Probabilities for Corn and Soybeans Prices for 2016." farmdoc daily (6):142, Department of Agricultural and Consumer Economics, University of Illinois at Urbana-Champaign, July 28, 2016.