Crop costs, which include seed, pesticide, and fertilizer costs, have grown more in recent years than have cash rents. Between 2014 and 2015, costs did decline, with most of the reductions coming from cash rents and fertilizer costs. Seed and pesticide costs have not decreased much. Continuing cost cuts are needed, particularly as Agricultural Risk Coverage (ARC) payments likely decrease for the 2017 year. It remains to be seen how much cost are reduced the 2017 growing year.

Bars in Figure 1 show three crop costs stated on a per acre basis: Seed costs, pesticide costs, and fertilizer costs. Values in Figure 1 represent averages for corn grown on high-productivity farms in central Illinois (see Table 1 in the July 12th farmdoc daily for the costs). Over the period from 1990 to 2015, the sum of these crop costs was lowest in 1990 at $98 per acre. The highest level of these three costs occurred in 2014 at $358 per acre. Then, crop costs decreased by $8 per acre to $350 per acre in 2015. 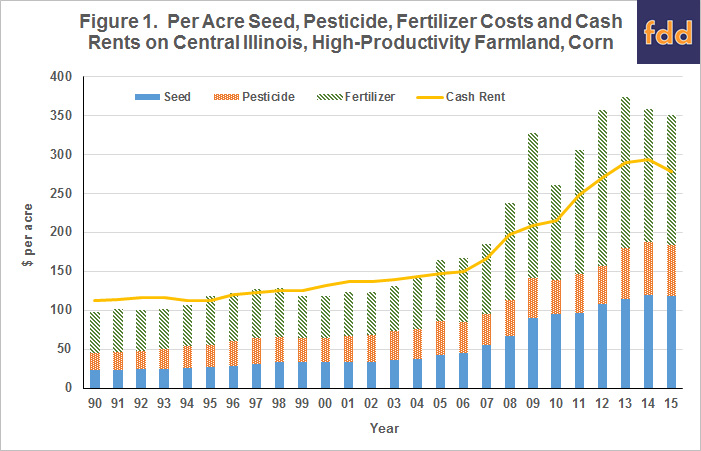 A larger decrease is anticipated between 2015 and 2016. Illinois Crop Budgets suggest a $41 per acre decrease in fertilizer costs. Seed costs are anticipated down by $2 per acre. Cash rents are projected to decrease $10 per acre. If projections hold, the three costs plus cash rent would decrease by $53 per acre.

Even given this decrease, net returns to the farmer are projected to be negative on cash rent farmland (see Revenue and Costs for Corn, Soybeans, Wheat, and Double-Crop Soybeans). At this point, higher prices in 2017 do not seem likely, with corn price expected to be below $4.00 per bushel. Moreover, Agricultural Risk Coverage at the county-level (ARC-CO) – the most prominent choice to receive commodity title payments – likely will not make payments in 2017. For 2016, ARC-CO is projected to make an average $30 per acre payment. As a result, revenue likely will be down in 2017. Lower 2017 expected revenue coupled with a negative 2016 return suggests cost reductions need to continue into 2017.

The source of cost cuts will be interesting and have broader implications. So far, most cost cuts have come from cash rents and fertilizer costs. Little of the reduction has come from seed or pesticides. This may signal a realignment away from historical shares of costs that existed from 1990 to 2006. If this occurs, seed and pesticides will represent a higher share of total costs and crop revenue than historically has happened. This would then imply that more of the needed cost reductions must come from other areas, with one of the most likely areas being cash rents. Further cash rent reductions could lead to lower farmland prices. If on the other hand, seed costs are reduced, input supply companies could face lower incomes. Since most input supply companies are publicly-traded, lower incomes could then led to stock price decreases.

Crop costs and cash rents did decrease in 2015 from 2014 levels. Projections point to lower costs in 2016. It is likely that continued cost cutting will be needed into 2017. Because crop prices are not projected to increase, and ARC-CO payments will be lower in 2017, further cuts will be needed to cover likely revenue decreases. It remains to be seen if these cost cuts expand from cash rents and fertilizer to include seed and pesticide costs.