Understanding the current era of US economic malaise lies, at least in part, with the most basic of American enterprises – the production and marketing of food.

A historical, even defining feature of economic growth has been a decline in the share of expenditures that consumers devote to food and food services (hereafter food). However, since 2002 for the US, Engel’s Law, so named for the economist who first observed it, has not held. Real inflation adjusted Gross Domestic Product (GDP) has increased by 27%, but the share of consumer expenditures spent on food has flat-lined at 11.8% (see Figure 1). In contrast, between 1955 and 2002, a period that post-dates the dislocations associated with the World Wars and Great Depression, the share spend on food declined from 23.5% to 11.8%, or on average by 0.25 percentage points per year. 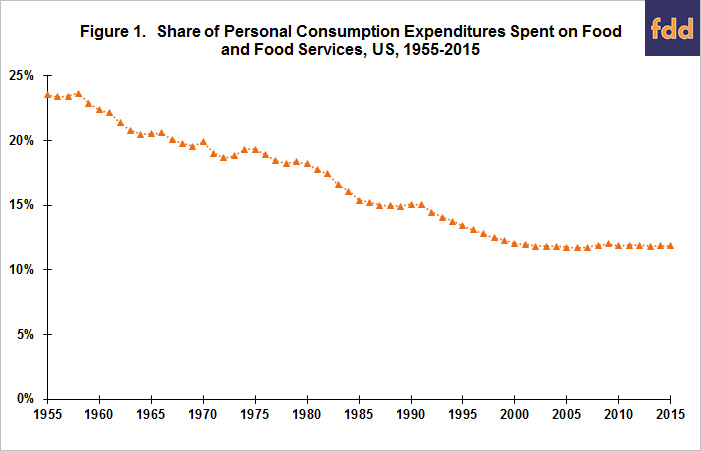 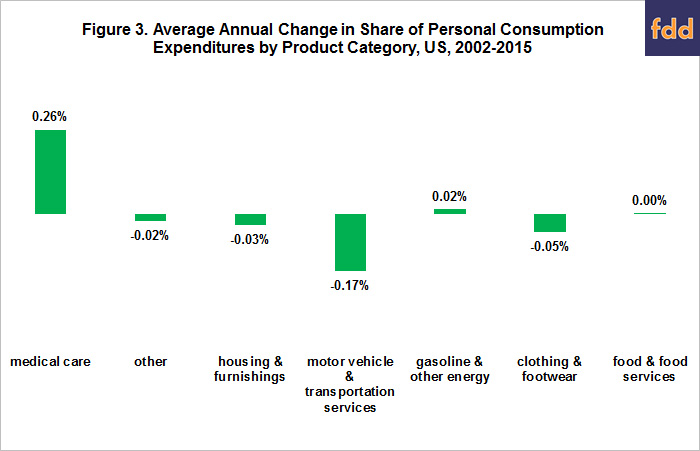 Increasing production efficiency of US farms played an important role in the 1955-2002 decline in share spent on food. Utilizing a data series from the US Department of Agriculture, the farm production value of domestically sourced food declined from a 7.2% share of personal consumption expenditures in 1955 to a 1.4% share in 2002, a decline of 5.8 percentage points (see Figure 4). However, it was not the only factor. Almost as important was the 5.5 percentage point decline in the share spent for the marketing bill that transforms domestic farm commodities into the food consumers buy (see data note 1). 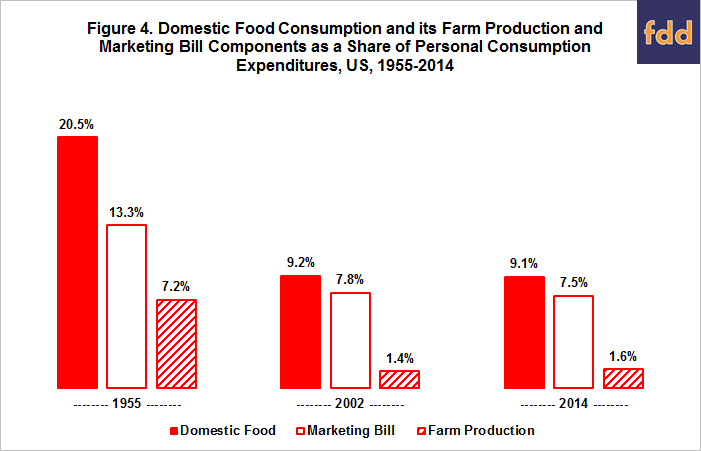 The 5.8 percentage point decline in the share spent on domestic farm commodities between 1955 and 2002 cannot be repeated. Its share is now only 1.6%. Reduction in the share spent on the domestic food marketing bill is possible but likely to be more difficult in the future as its share is now 7.5%. Since 2002, the food marketing bill’s share has declined only 0.3 percentage points. (See data note 2.)

Reinforcing these numerical observations is the increased demand for organic food and local food, which is often produced on small farms. Farm management analysis consistently finds that cost per farm output unit is higher for organic production and not lower for small farms (Foreman, for example).

Council of Economic Advisors. 2016. Economic Report of the President, 2016 https://www.whitehouse.gov/administration/eop/cea/economic-report-of-the-President/2016

2. A topic of long standing interest is the split between food consumed at home and away from home. The latter's share of total food expenditures increased slightly from 2002 (42%) to 2014 (45%).