In previous articles, we explored the political footprints for the major commodities that form the coalition that drives the development of U.S. farm policy (see, farmdoc daily August 11, 2016 and August 25, 2016). In this article, we add further perspective on farm policy and politics by examining the number of farms and farm operators within the overall footprint for the traditional farm coalition of corn, cotton, and wheat.

The Number of Farms in the Traditional Farm Coalition

The Census of Agriculture is a national account of all U.S. farms, ranches, and operators conducted by USDA. The Census is taken every five years and provides valuable information on land use and ownership, operator characteristics, production practices, income, and expenditures. For many pieces of information on the farm sector and the rural economy, the Census serves as the only source of detailed locational information, such as county and Congressional district level estimates. The most recent Census of Agriculture was conducted in 2012.

According to the 2012 Census of Agriculture, the United States is home to 2,109,303 farms. The Census defines a farm as any place from which $1,000 or more of agricultural products were produced and sold, or normally would have been sold, in the reference year. The distribution of farms across Congressional districts (114th Congress) is shown in Figure 1. As expected, farms are heavily concentrated in the Great Plains, Midwest, and Mississippi Delta regions. 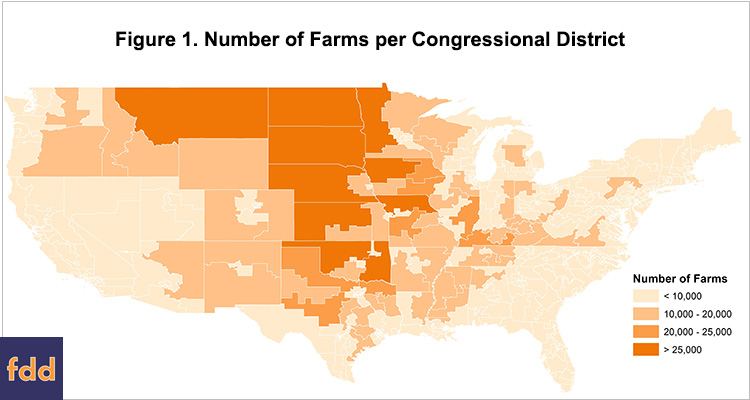 As we discussed previously, the traditional farm coalition is comprised of three major commodities: corn, cotton, and wheat. We used recent USDA production information to identify the widest possible political footprint of each of these three commodities. That included every county in a Congressional district that contains at least some portion identified as a major production county for the crop. In sum, the entire coalition spans 152 Congressional Districts. According to the Census, the Congressional districts within that traditional coalition are home to approximately 63% of U.S. farms (1,333,289 farms).

The Number of Farm Operators in the Traditional Farm Coalition

The number of farms, however, is only one part of the picture for the farm coalition. Each farm recorded in the Census likely impacts the livelihood of several individuals. All of politics eventually boils down to votes and voters; therefore, a fuller picture of the political strength of the farm coalition requires an indication of the potential voters in the footprint. Accordingly, we examine the distribution of farm operators by Congressional district as a measure of potential votes in Figure 2. 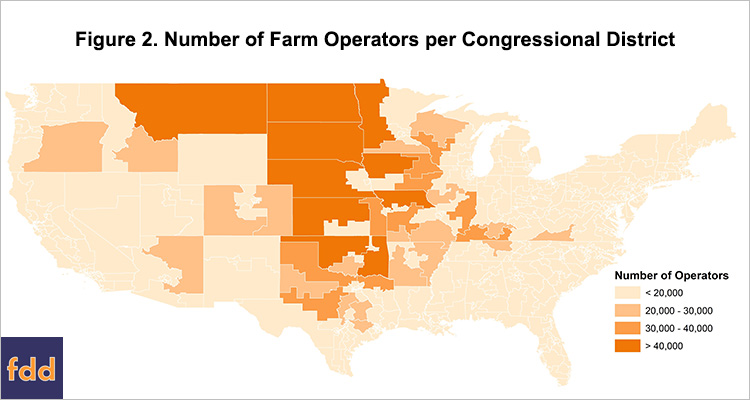 The Census defines an operator as a person who operates a farm, either doing the work or making day-to-day decisions about such things as planting, harvesting, feeding, and marketing. The operator may be the owner, a member of the owner’s household, a hired manager, a tenant, a renter, or a sharecropper. According to the 2012 Census of Agriculture, there are 3,180,074 farm operators in the U.S. This translates roughly to 1.5 operators per farm, on average.

The distribution of farm operators, not surprisingly, closely mirrors that of farms (Figure 1), with a large concentration across the Great Plains, Midwest, and Mississippi Delta. More to the point, the traditional farm coalition — as previously defined — is home to 2,028,642 farm operators or roughly 64% of all U.S. farm operators.