Strong import demand is largely credited with soybean’s relatively high current price, especially in the face of a US soybean yield that currently is a record by 3.4 bushels per acre. China remains the largest source of growth in world soybean imports measured in bushels, but its projected growth rate for the 2016 crop year is smaller than the growth rate for the rest of the world. If this projection holds, it will be the first time China has not had a higher growth rate since it became a continuous soybean importer in the mid-1990s. For additional discussion of the current US soybean market see the farmdoc daily articles of October 17, 2016 and October 24, 2016. For more discussion of the world soybean market see the farmdoc daily article of March 13, 2015.

This study begins with the 1995 crop year and ends with the current projections for the 2016 crop year. Since 1995, China has been a net importer of soybeans. Sources for the data are two US Department of Agriculture websites: Production, Supply, and Distribution Online (Foreign Agriculture Service) and World Agricultural Supply and Demand Estimates (Office of the Chief Economist).

Over the past 20 years, China’s annual imports of soybeans has exploded from essentially 0 to 3.2 billion bushels currently projected for the 2016 crop year (see Figure 1). Its share of world soybean imports grew from 2% to 63%. In contrast, soybean imports by the rest of the world flat lined at 1.3 billion bushels between the 1997 and 2012 crop years. Since 2012, growth has reemerged, with new records set in each crop year starting with 2014. Soybean imports by the rest of the world are currently projected to be 39% higher during the 2016 vs. 2012 crop year. 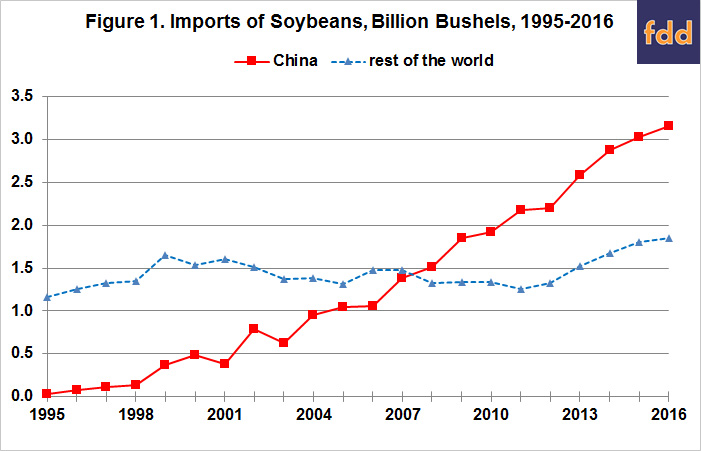 China’s percent growth rate in soybean imports has consistently trended lower (see Figure 2). Annual average change over five years is used to smooth individual year fluctuations. China’s downward trend in part reflects math. Because economic constraints exist, It is easier for measures of economic activity to have a higher percent change when the measure has a lower than a higher value. More interesting is that the 2016 crop year could be a pivot point. If current projections are realized, the percent growth rate in soybean imports will be smaller for China than the rest of the world for the first time since China emerged as a consistent importer of soybeans. For the world as a whole, the growth in soybeans import is now faster than at any time since the early 2000s. 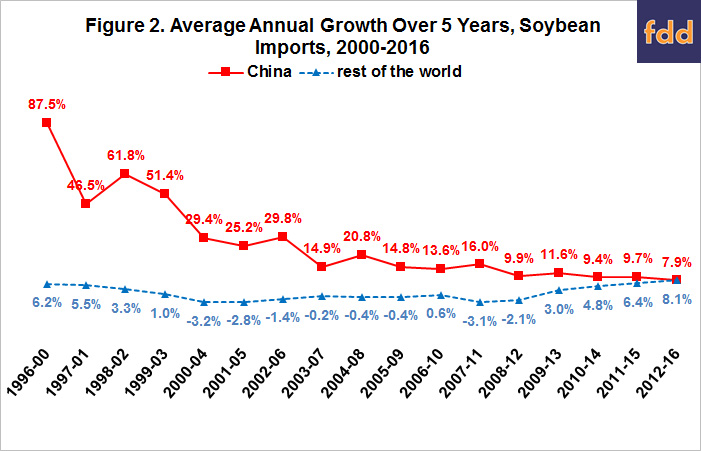 Notwithstanding the Importance of the preceding point, it is equally important to note that, because of its dominant size in the world soybean import market, China remains the dominant actor in terms of the growth in physical quantity of soybean imports. For example, since 2012, China’s imports of soybeans measured in million bushels have increased twice as much as imports by the rest of the world (see Figure 3). 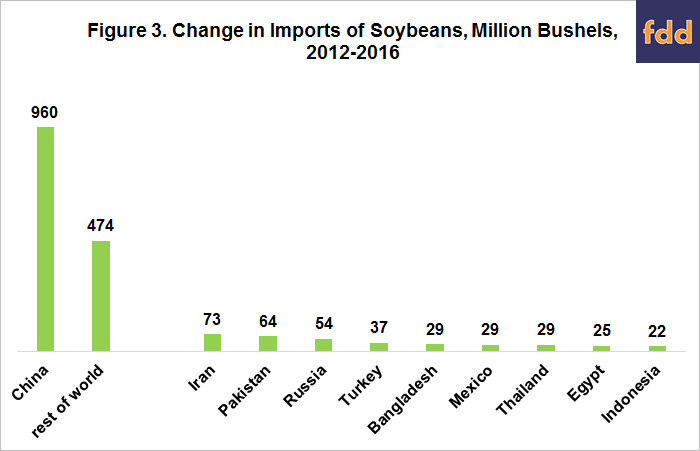