The U.S. Environmental Protection Agency (EPA) announced the final rulemaking for the Renewable Fuels Standard (RFS) for 2017 and the biomass-based diesel volume requirement for 2018 on November 23rd. In this article, we analyze the expected outcome of implementing the newly announced mandates. These standards surprised the market by upping the 2017 conventional ethanol mandate to the statutory maximum and increasing the mandate for total advanced biofuels more than expected. That is, the advanced biofuels mandate was reduced from the statutory mandate by much less than the maximum allowable reduction that is equal to the reduction in the cellulosic mandate. Figure 1 provides tangible evidence of the degree of market surprise in terms of RIN prices, the tradeable credits used to comply with the RFS. Both D4 biodiesel and D6 ethanol RINs prices have rallied more than 15 percent since release of the final 2017 rulemaking, with the D6 price crossing the psychologically important $1 mark. The focus of the present analysis, then, is on the magnitude of the “push” in production and consumption of biofuels implied by the requirements (mandates) of the RFS and the implications for production and consumption of biomass-based diesel. The analysis follows a similar format of our previous analysis of earlier EPA rulemakings, most recently in the farmdoc daily articles of May, 26, 2016 and June 2, 2016. 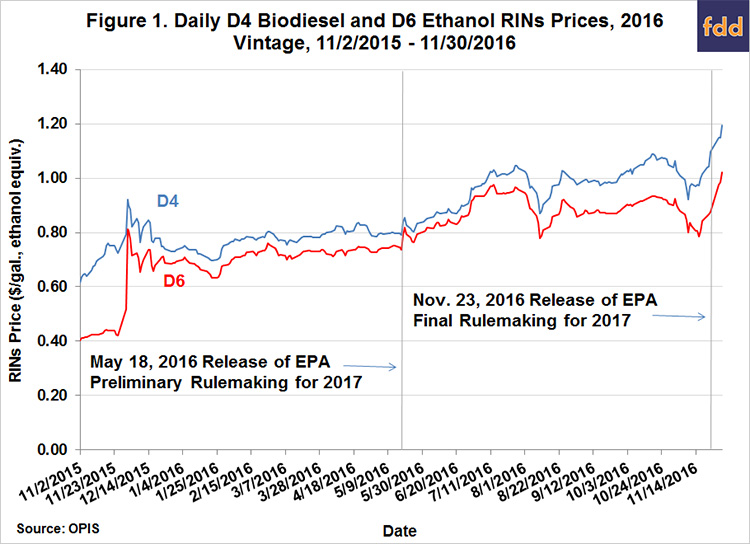 The statute for the Renewable Fuels Standards (RFS) required the U.S. Environmental Protection Agency (EPA) to establish volume requirements for four categories of biofuels for each year from 2008 through 2022: cellulosic biofuel, biomass-based diesel, total advanced biofuel (which includes biomass-based diesel), and renewable fuel (referred to as conventional ethanol here). The difference between the total advanced mandate and the total of the cellulosic and biodiesel mandate is referred to as the undifferentiated advanced mandate and can be satisfied by a combination of qualified advanced biofuels. Conventional biofuels is generally assumed to be corn-based ethanol but this is actually not explicitly required by the RFS legislation. Instead, corn-based ethanol has been the cheapest alternative for this category that also meets the environmental requirements of the RFS. In addition, the conventional portion of the mandate can also be satisfied with discretionary blending of advanced biofuels, so one can refer to the conventional mandate as an implied mandate. We refer to this implied mandate as the conventional ethanol mandate in order to be consistent with the most common term for this particular RFS mandate. Cellulosic biofuels have been in very limited supply, so the EPA has written down the cellulosic mandate to very low levels relative to statutory levels each year. The total advanced biofuel mandate has also been written down in conjunction with the write down in the cellulosic mandate. The biodiesel mandate was established as a minimum of one billion gallons per year from 2012 through 2022, with larger amounts subject to EPA approval. 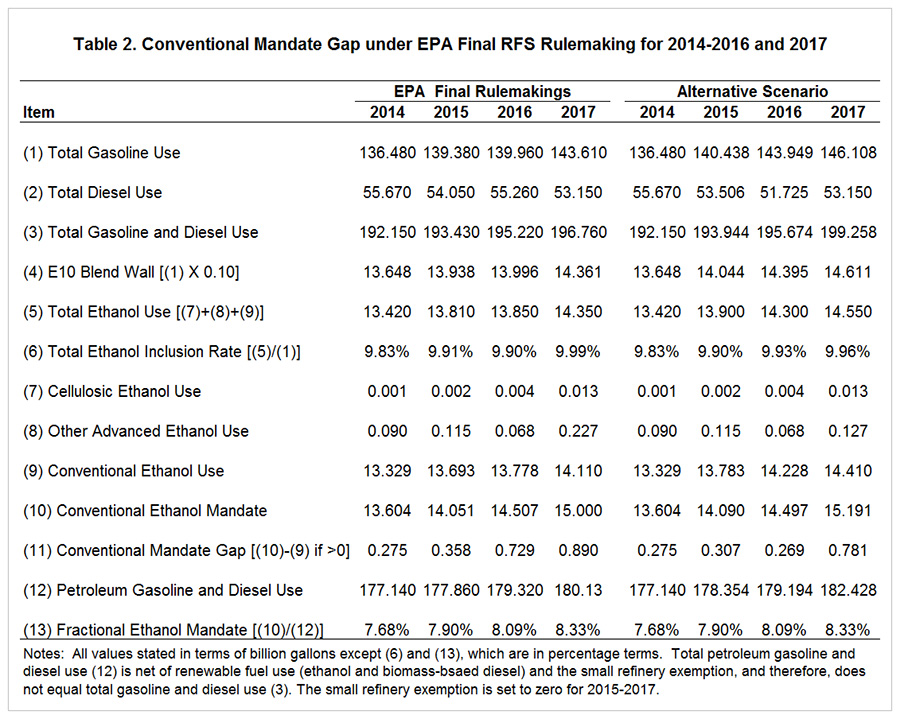 In the second section of Table 2, we calculate the conventional mandate gap with alternative scenarios for 2015, 2016, and 2017. The difference between these scenarios and that of the EPA is primarily in our higher projections of total gasoline consumption. Based on estimates provided by the U.S. Energy Information Administration (EIA) in its November 2016 Short Term Energy Outlook (STEO) we estimate that gasoline consumption increased by 2.9 percent year-over year in 2015 and is proceeding at a rate of increase of 2.5 percent in 2016. We project a conservative 1.5 percent increase for 2017 based on the assumption of continued low crude oil prices. Our calculations based on EIA estimates also suggest that ethanol consumption exceeded the EPA estimate in 2015 and will exceed the EPA projection for 2016. We also project larger consumption in 2017, even with a slightly lower inclusion rate (Line 6). With gasoline consumption under the alternative scenario exceeding the EPA estimate for 2017 and with a fixed fractional rate of 8.33 percent, the volumetric mandate is 191 million gallons larger than the EPA’s mandate. Our projection of consumption of other advanced ethanol use (almost entirely imports from Brazil) is 100 million gallons less than the EPA projection. On net, then, our estimate of the conventional mandate gap for 2017 is 109 million gallons less than under the EPA scenario. In addition the gap is 51 million gallons smaller for 2015 and 460 million gallons smaller for 2016. The reason for the drop in 2016 is that our higher estimate of gasoline consumption implies a much higher consumption of ethanol.

The EPA characterized the newly announced 2017 standards in this statement: “The final standards are expected to continue driving the market to overcome constraints in renewable fuel distribution infrastructure, which in turn is expected to lead to substantial growth over time in the production and use of renewable fuels.” That is, the EPA asserted that the rulemaking constitutes a “push” in biofuels consumption beyond the so called E10 blend wall and for continued expansion in advanced biofuels consumption. Regardless of the assumptions used, our analysis indicates that the EPA was true to their intention of pushing the conventional ethanol mandate beyond the blend wall. 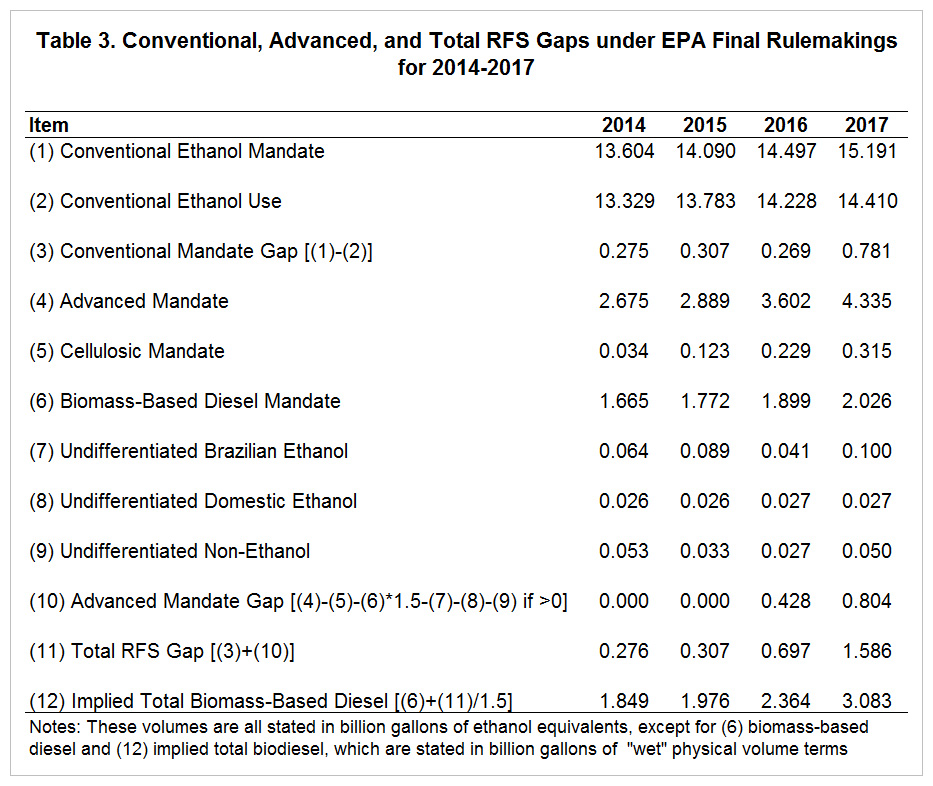 The magnitude of the implied use of biomass-based biodiesel likely explains the 6 percent increase in soybean oil prices since November 22nd (farmdoc daily, November 28, 2016). Based on estimates in the EIA Monthly Biodiesel Production Report, about 7.4 pounds of feedstock are required for each gallon of biodiesel production and soybean oil accounts for 54 percent of those feedstocks. At that rate, an increase in biomass-based diesel production of 719 million gallons in 2017 would require an additional 2.87 billion pounds of soybean oil. To put that in perspective, 2.87 billion pounds represents 14 percent of the USDA’s projection of domestic soybean oil consumption during the 2016-17 marketing year that already includes a projection of 5.95 billion pounds used for biodiesel production. The increase would be larger if soybean oil garnered a larger share of the biodiesel feedstock market and smaller if a portion of the gap were filled from the stock of RINs. The willingness for the industry to use RINs stocks, however, may depend on expectations of future EPA rulemakings and the outcome of pending court cases about previous waivers of the conventional ethanol mandate.

We analyzed the magnitude of the “push” in production and consumption of biofuels implied by the 2017 requirements (mandates) of the RFS published last week by the EPA. We found that regardless of the assumptions used, the EPA was true to their intention of pushing the conventional ethanol mandate beyond the blend wall. Two important additional questions arise from our “gap” analysis of the RFS mandates. First, given our projection that domestic consumption of conventional ethanol could reach 14.41 billion gallons in 2017, when will domestic consumption reach the statutory mandate of 15 billion gallons and completely eliminate the conventional mandate gap? The answer has important implications for the value of conventional ethanol (D6) RINs. The second is a policy issue. The advanced biofuels mandates for each year from 2014 to 2017 represent a push in production and consumption in that the write down in the total advanced mandate was less than the write down in the cellulosic mandate. That difference is 469 million gallons in 2017, much larger than in the previous two years. An important policy issue, then, is whether the magnitude of the push will continue to increase under a new Administration. The answer has important implications for the demand for biodiesel feedstocks and the value of biomass-based biodiesel (D4) RINs. We will examine these questions in an upcoming article.

Environmental Protection Agency. "Renewable Fuel Standard Program: Standards for 2017 and Biomass-Based Diesel Volume for 2018." Prepublication version signed by EPA Administrator, Gina McCarthy on November 23, 2016, and accessed November 30, 2016. https://www.epa.gov/sites/production/files/2016-11/documents/rfs-2017-annual-rule-frm-2016-11-23.pdf [Please refer to the official version in a forthcoming FR publication, which will appear on the Government Printing Office's FDSys website (www.gpo.gov/fdsys/search/home.action) and on Regulations.gov (www.regulations.gov) in Docket No. EPA-HQ-OAR-2016-0004.]