Current 2017 fall delivery bids for central Illinois are near $10 per bushel for soybeans while corn is near $3.60 per bushel. At those prices, soybeans are projected to be near $80 per acre more profitable than corn, sending a strong signal to switch acres from corn to soybeans. With increased 2017 soybean plantings, consideration should be given to pricing production on additional acres, thereby mitigating some risks associated with soybean price decreases. Returns for 2017 are projected to be low. Corn prices need to approach or exceed $4.00 per bushel before the farm financial position stabilizes in the Corn Belt.

Corn and soybean budgets for high-productivity farmland in central Illinois are shown in Table 1. Yields and costs in Table 1 come from the 2017 Illinois Crop Budgets released in September 2016. Prices, however, differ from those in the 2017 Crop Budgets. Current fall delivery bids are placed in the budget. During the last week of November 2016 fall delivery could have been contracted for $3.60 per bushel for corn and $10.00 per bushel for soybeans. 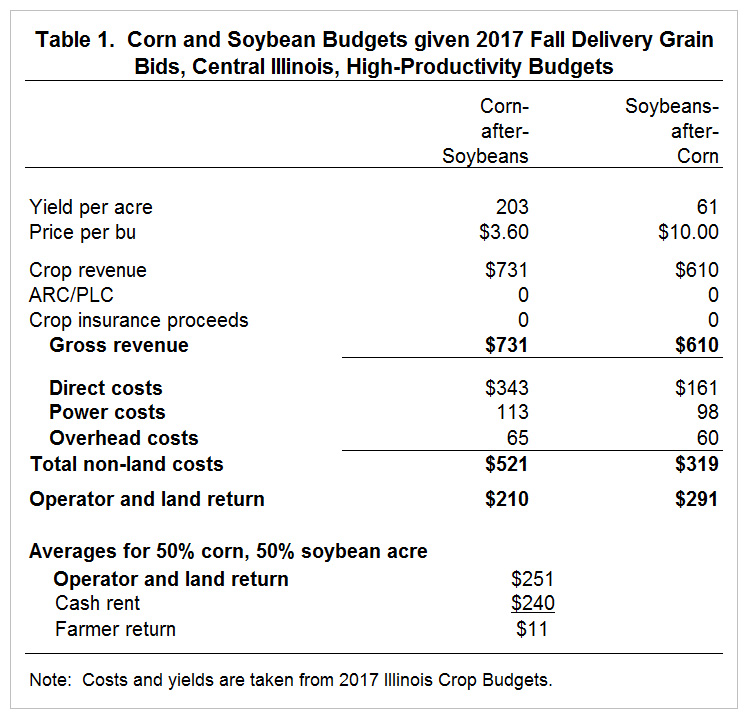 At those prices, operator and land returns equal $210 for corn and $291 for soybeans. Since soybeans are projected to be $81 per acre more profitable than corn, a strong market signal to plant more soybeans exists. Note that returns and costs are for central Illinois, a region where corn typically has higher returns than soybeans. For regions outside of central Illinois, the profit advantage of soybeans may be higher.

While market incentives for more soybeans currently exist, farmers may have concerns about market reactions. Total soybean production will increase if many farmers switch acres to soybeans, leading to lower soybean prices. This concern should be taken seriously.

Current fall delivery bids are near $10 per bushel for soybeans. A $10 soybean price is much higher than many current projections. For example, the U.S. Department of Agriculture is projecting a $9.30 soybean price for the 2017/18 marketing year (Office of Chief Economist, U.S. Department of Agriculture). Relatively high soybean prices relative to projection suggest that forward pricing soybeans may be prudent even if additional acres of soybeans are not planted.

A risk of forward pricing is that prices could go higher. For forward priced grain, perhaps the worst scenario occurs if prices are well above $10 and yields are low. This situation could occur because of a summer drought causing low soybean yields, leading to a market response of higher prices. One way of protecting against this possibility is to purchase Revenue Protection (RP) insurance at a high coverage level. The guarantee increase feature of RP will allow guarantees to increase if prices are higher in the fall of 2017. A second way to mitigating the risk of higher prices is to use futures options contracts to set a floor on price while still benefiting from rising prices.

Another concern may relate to projected prices on crop insurance products. The projected price will not be set until February. Soybean prices could fall into February, leading to a lower projected price for soybeans. To protect against this possibility, farmers could purchase add-on policies that allow the projected price to be the higher of the projected price in February or the futures price during an earlier time period. Risk reductions associated with this strategy should be weighed carefully. Over time, farmers should expect to pay more for add-on products than they receive in indemnity payments.

Another factor favors switching to soybeans. Soybean prices must fall considerably before soybeans and corn have the same profitability. At a $3.60 corn price, the soybean price would have to decrease to $8.67 before corn and soybeans have the same profitability (see Table 2). A decline of this magnitude is possible but likely would require major changes in production. 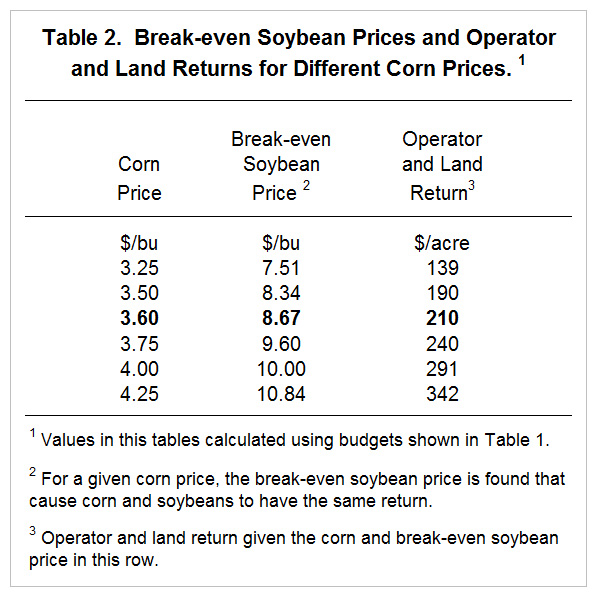 Prices of $4.00 for corn and $10 for soybeans give an operator and land return of $291 per acre (see Table 2). Return at that level would result in a sustainable financial position if cash rents are near $250 per acre. Hence, prices of $4.00 for corn and $10.00 for soybeans could be viewed as sustainable prices at which the financial positions of farms remain stable. These prices do not seem likely for 2017 at this time.