The EPA released the final rulemaking for 2014-2016 RFS standards on November 30, 2015. That final rule making reflected a change in EPA policy in that the implied mandate for conventional biofuel (ethanol) in 2016 was large enough to imply a measurable “push” beyond the E10 blend wall. The magnitude of the push was apparently not well understood as there was some confusion about the mechanism of enforcement of the mandate. Specifically, the mandate is not enforced as a strictly volumetric mandate, but instead is enforced as a fractional mandate. That is, the mandate is enforced as a blend rate rather than in volumetric terms. The likely magnitude of the push contained in that final rulemaking was examined in the farmdoc daily article of December 4, 2015, with the conclusion that the push likely approached one billion gallons for 2016.

The RFS statutes require the EPA to establish biofuel volume requirements in four categories for each year from 2008 through 2022: cellulosic biofuel, biomass-based diesel (BBD), total advanced biofuel (which includes BBD), and conventional biofuel. The difference between the total advanced mandate and the total of the cellulosic and biodiesel mandate is referred to as the undifferentiated advanced mandate and can be satisfied by a combination of qualified advanced biofuels. Conventional biofuel is generally assumed to be corn-based ethanol but this is actually not explicitly required by the RFS legislation. Instead, corn-based ethanol has been the cheapest alternative for this category that also meets the environmental requirements of the RFS. For ease of discussion, however, we will refer to conventional biofuel as conventional ethanol. In addition, the conventional portion of the mandate can also be satisfied with discretionary blending of advanced biofuels, so we refer to the conventional mandate as an implied mandate

The Magnitude of the Conventional Biofuels Push

The calculation of the magnitude of the conventional biofuels (ethanol) push contained in EPA rule making is in theory straight-forward, requiring the comparison of the magnitude of the mandate to the level of expected consumption. A positive difference represents a push above the E10 blend wall. However, as demonstrated in earlier farmdoc daily articles (June 3, 2015; June 10, 2015; June 17, 2015; December 4, 2015), those calculations are far from simple in practice and each of the calculations requires a number of projections and assumptions. Here, we re-examine the magnitude of the likely conventional biofuels push contained in the final rule making for 2014-2016 and then the likely magnitude of the push in the preliminary rulemaking for 2017. A key part of the analysis is updating projections of gasoline and diesel fuel consumption. 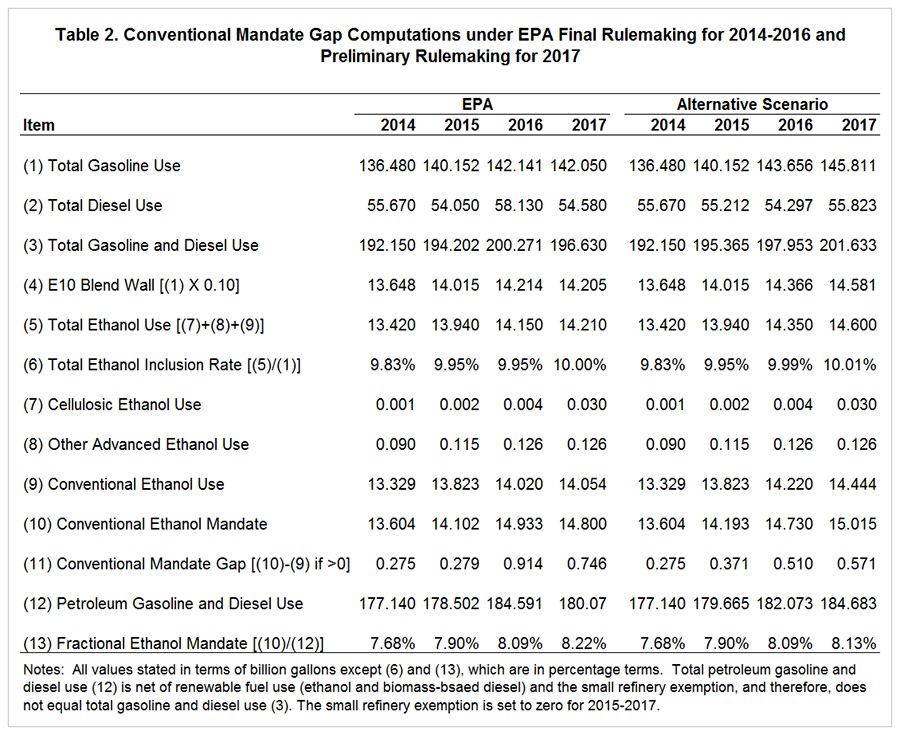 The alternative scenario presented in Table 2 increases the 2016 and 2017 estimates of domestic gasoline consumption. Consumption in 2016 is projected to be 2.5 percent larger than in 2015 rather than the plus 1.4 percent assumed by the EPA and consumption in 2017 is projected to increase by 1.5 percent rather than decline. These projections are plausible given recent data on how fast vehicle miles travelled and gasoline use in the U.S. have been increasing. Projections of diesel consumption relative to 2014 reflect growth rates found in the EIA’s May 2016 STEO. All other assumptions are the same as under EPA rulemaking computations in Table 3. Finally, it is interesting to observe that the projected increase in gasoline consumption would allow the EPA to nudge the fractional conventional ethanol mandate down to 8.13 percent but still increase the effective conventional ethanol mandate for 2016 to the statutory level of 15.0 billion gallons.

Since RINs prices represent the marginal cost of complying with RFS mandates, it is important to monitor any changes in RINs prices after the release of EPA rulemakings. Changes up or down in RINs prices indicate whether the market was surprised about the standards in the rulemaking. Figure 1 shows the prices of 2016 vintage D4 biodiesel and D6 ethanol RINs prices over November 2, 2015 through May 26, 2016. A 2016 “vintage” RIN indicates the RIN is generated within the 2016 calendar year and can be used for RFS compliance in 2016 and 2017. This means that any prices reported in 2015 for 2016 vintage RINs are forward contract transactions rather than spot transactions. Figure 1 reveals that D4 and D6 prices had much more muted reactions to the May 18 preliminary 2017 rulemaking than the final rulemaking for 2014-16 last November. Since the May 18 release of the latest rulemaking, D4 RINs have increased 2.75 cents per gallon, or 3.5 percent, and D6 RINs have increased 4 cents per gallon, or 5.5 percent. This suggests that the market largely anticipated the level of the standards in the 2017 proposal. 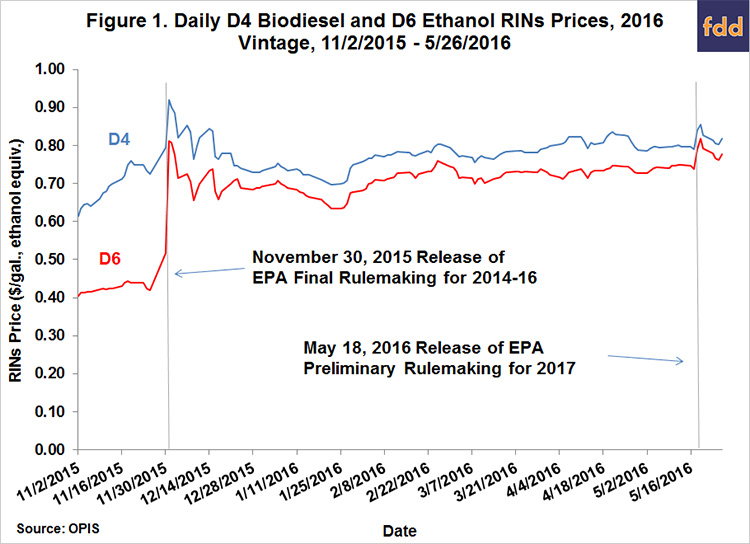 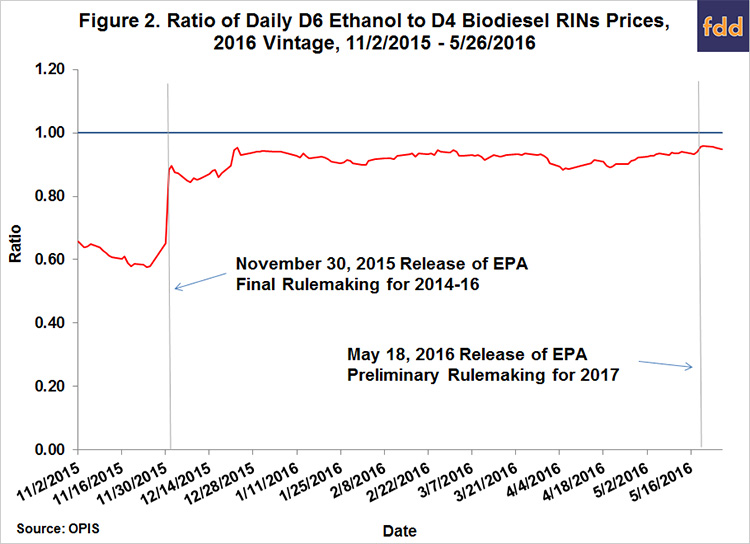