In the farmdoc daily article of November 30, 2016, we examined the magnitude of the “push” in production and consumption of biofuels implied by the U.S. Environmental Protection Agency (EPA) final rulemaking for the Renewable Fuels Standard (RFS) for 2017 and the biomass-based diesel volume requirement for 2018 announced on November 23rd. Two important questions arose from that analysis. First, given our projection that domestic consumption of conventional ethanol could reach 14.41 billion gallons in 2017, when will domestic consumption reach the statutory mandate of 15 billion gallons and completely eliminate the conventional mandate gap? The answer has important policy implications, including the value of conventional ethanol (D6) RINs. Second, the advanced biofuels mandate for each year from 2014 to 2017 represent a push in production and consumption in that the write down in the total advanced mandate was less than the write down in the cellulosic mandate. That difference is 520 million gallons in 2017, much larger than in the previous two years. An important issue with regards to future implementation of the RFS, then, is the magnitude of the advanced mandate push, if any, under a new Administration. The answer has important implications for the demand for biomass-based diesel, required feedstocks, and the value of biomass-based biodiesel (D4) RINs. We analyze those questions in detail in this article. 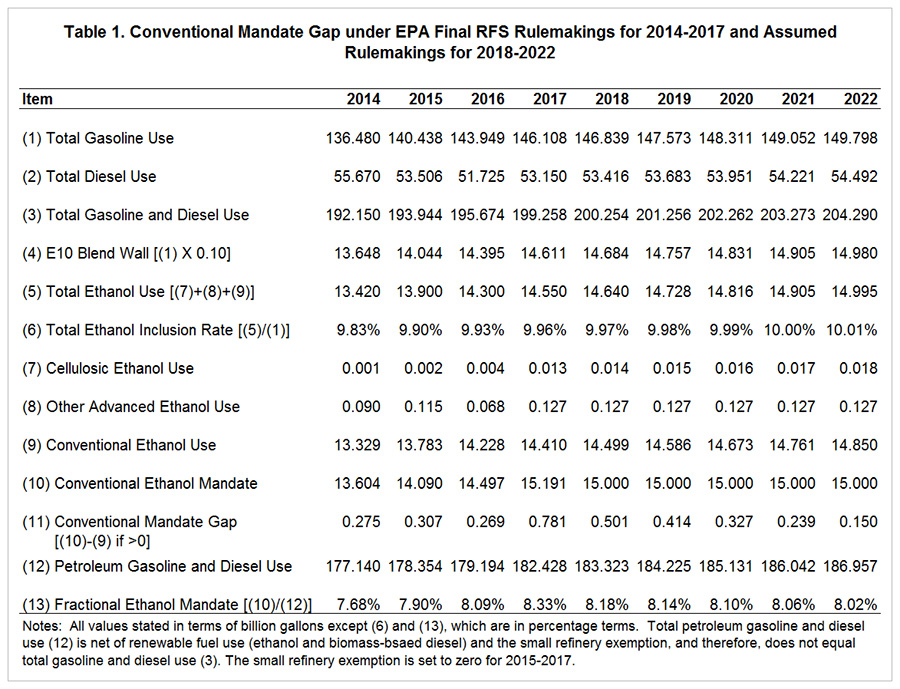 The analysis is extended for the years 2018 through 2022 (Table 1), under the following assumptions: 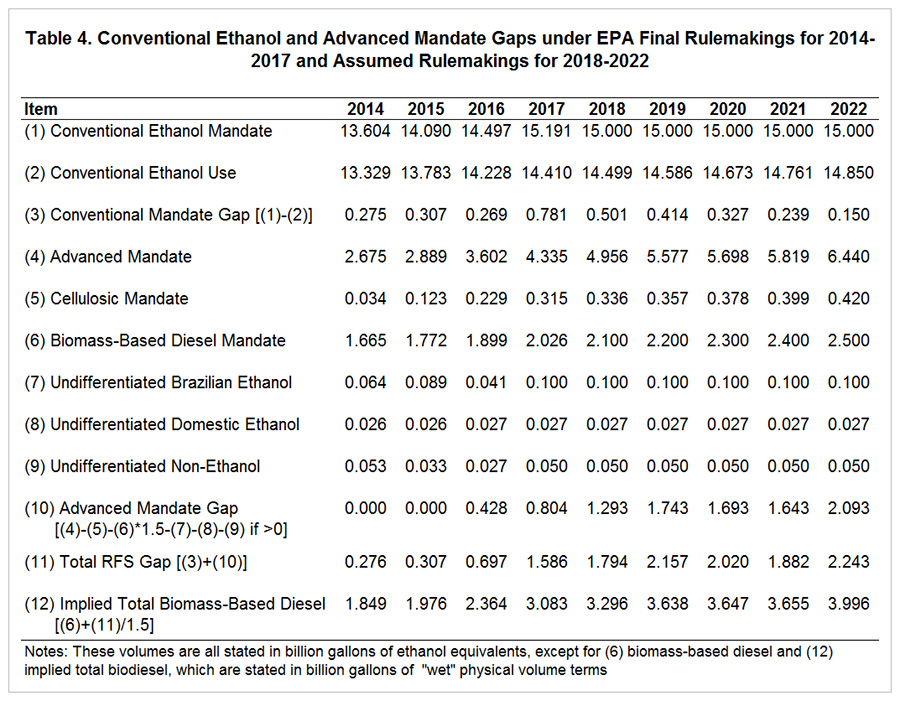 The policy question is, how aggressive will the advanced biofuels push be in the future? The push was increased for both 2016 and 2017, so we start with the scenario of a larger push each year from 2018 through 2022 (Table 3). Again, line 1 shows the annual statutory cellulosic mandate through 2022 and line 2 shows the projected actual cellulosic mandate assuming a 20 million gallon annual increase in production capacity. The magnitude of the projected write down, then, is presented in line 3. The statutory advanced biofuels mandate is shown in line 4 and the projected actual mandate is shown in line 5 under the assumption that the difference between the cellulosic and total mandate write down increases by 100 million gallons per year, reaching 1.02 billion gallons in 2022 (line 7). Table 4 then presents the calculation of the conventional, advanced, and total RFS gaps to 2022 assuming no growth in consumption of undifferentiated ethanol (Brazilian and domestic) and non-ethanol advanced biofuels. The calculated RFS gap grows to 2.243 billion gallons by 2022. Assuming that the biomass-based diesel mandate is increased by 100 million gallons from 2019 through 2022 and that the entire RFS gap is satisfied with biomass-based biodiesel, we calculate total production of biomass-based diesel to 2022. That calculation grows from 3.083 billion gallons in 2017 to 3.996 billion gallons in 2022.

We have examined two central questions about domestic biofuels consumption through 2022 as they relate to the RFS. First, when will domestic consumption of ethanol reach the statutory RFS mandate ceiling of 15 billion gallons and completely eliminate the conventional ethanol mandate gap? Second, what will be the magnitude of the push in the production and consumption of advanced biofuels to the year 2022? The answer to the first question depends heavily on the rate of increase in domestic fuel consumption, while the answer to the second question will depend on how the new Administration chooses to implement the advanced RFS mandate starting in 2018. We conclude that: (1) consumption of conventional ethanol could reach the statutory mandate of 15 billion gallons sooner than the market anticipates, which could result in substantial downward pressure on D6 RINs prices; and (2) while annual production and consumption of biomass-based diesel and its feedstocks will likely increase substantially by 2022 in order to fulfill the advanced mandate, the magnitude of the increase could vary over a wide range depending on how much of the cellulosic mandate is effectively converted into additional biomass-based diesel mandate.

Environmental Protection Agency. "Renewable Fuel Standard Program: Standards for 2017 and Biomass-Based Diesel Volume for 2018." Prepublication version signed by EPA Administrator, Gina McCarthy on November 23, 2016, and accessed December 7, 2016. https://www.epa.gov/sites/production/files/2016-11/documents/rfs-2017-annual-rule-frm-2016-11-23.pdf [Please refer to the official version in a forthcoming FR publication, which will appear on the Government Printing Office's FDSys website (www.gpo.gov/fdsys/search/home.action) and on Regulations.gov (www.regulations.gov) in Docket No. EPA-HQ-OAR-2016-0004.]