Total economic costs in 2015 for Illinois beef feeding enterprises exceeded total returns by $45.29 per 100 pounds of beef produced on farms enrolled in Illinois Farm Business Farm Management. The 2015 returns were lower than the 2014 returns where total returns exceeded total costs by $35.82 per 100 pounds produced. Total returns have exceeded total economic costs three out of the last ten years. The 2015 level of return above all costs were $34.73 per 100 pounds beef produced below the average return above all costs for the 2006 through 2015 time period. Figure 1 illustrates average returns, cash operating costs and total costs for the 2006 through 2015 period. 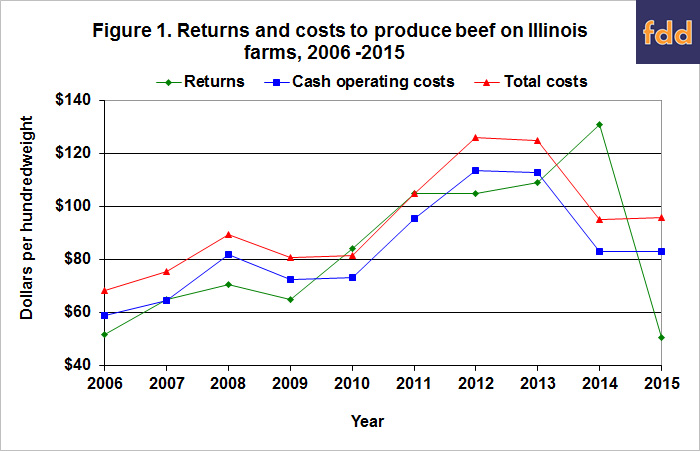 A negative inventory change in values contributed to the lower total returns for these enterprises. Total returns per 100 pounds produced decreased from $131.16 in 2014 to $50.67 in 2015. Total returns for 2014 were the highest on record. The average price received per 100 pounds of beef sold of $149.19 was about 2 percent higher than 2014. This price was the highest price received since this study began and the second year in a row that the price received averaged over $140 per hundredweight. The average price paid for feeder cattle replacements in 2015 of $210.69 was about 2 percent higher than 2014. The 2015 prices paid for feeder cattle replacements are the highest since this study began. The price paid for feeder cattle in 2014 and 2015 were the only years where the price paid averaged over $200.00 per hundredweight. The purchase cost of feeder cattle is subtracted from finished cattle sales in determining total returns per 100 pounds produced.

Returns to cattle feeders decreased in 2015 compared to 2014 and were below the last four-year average. The decrease in inventory values was the main factors for the decreased returns. Lower feed costs offset some of the higher cash operating expenses. Projections for 2016 show that beef production is estimated to increase about 6% and thus market cattle prices are expected to decrease about 19%. Returns for 2016 will not include a large inventory value change, however lower cattle prices are projected. Feed costs will be lower to lower grain and forage prices. With these factors combined, returns to all costs for 2016 are estimated to be similar to 2015.

The author would like to acknowledge that data used in this study comes from the local Farm Business Farm Management (FBFM) Associations across the State of Illinois. Without their cooperation, information as comprehensive and accurate as this would not be available for educational purposes. FBFM, which consists of 5,600 plus farmers and 60 professional field staff, is a not-for-profit organization available to all farm operators in Illinois. FBFM field staff provide on-farm counsel with computerized recordkeeping, farm financial management, business entity planning and income tax management. For more information, please contact the State FBFM Office located at the University of Illinois Department of Agricultural and Consumer Economics at 217-333-5511 or visit the FBFM website at www.fbfm.org.

A more thorough report can be found at the University of Illinois farmdoc website: http://farmdoc.illinois.edu/manage/enterprise_cost/FBM-0170beefcost.pdf