Payments by countercyclical and insurance programs are examined for the 2002-2015 crops of barley, corn, oats, peanuts, rice, sorghum, soybeans, and wheat. These two type of programs comprise the current crop safety net. Each program type accounted for 50% of payments across the 8 crops and 2002-2015 crop years. However, the role of each program type varied by crop and over time. These variations are discussed as background for the soon-to-commence debate over the next farm bill.

Insurance covers yield and revenue losses during the planting and growing season. Payments by insurance to farmers are calculated as net insurance payments, which equals insurance indemnity payments to farms minus the premiums paid by farms. Source for this data is the US Department of Agriculture (USDA) Risk Management Agency, which has oversight authority for farm insurance contracts.

The analysis starts with the 2002 crop year. It is the first crop year covered by the 2002 farm bill, which initiated CCP. It also postdates the introduction of crop revenue insurance, which occurred in the late 1990s, and the Agricultural Risk Protection Act of 2000, which enacted major changes in the US crop insurance program. Last, the 2002-2015 crop years are about evenly split between a period of higher prices (crop years 2007-2013) and crop years with normal to low prices (2002-2006 and 2014-2015). We divide payments out by these periods because the nature of payments should change.

Entire Time Period (2002-2015): Countercyclical program share of countercyclical plus net insurance payments ranged from 84% for peanuts and rice and 70% for cotton to 18% for wheat and 25% for soybeans (See Figure 1). The latter can be restated as the insurance share being 82% for wheat and 75% for soybeans. For the other crops, countercyclical program share was 49% for corn, 43% for barley, 39% for oats, and 37% for sorghum. As noted above, across all crops and crop years, each program accounted for half of all payments. 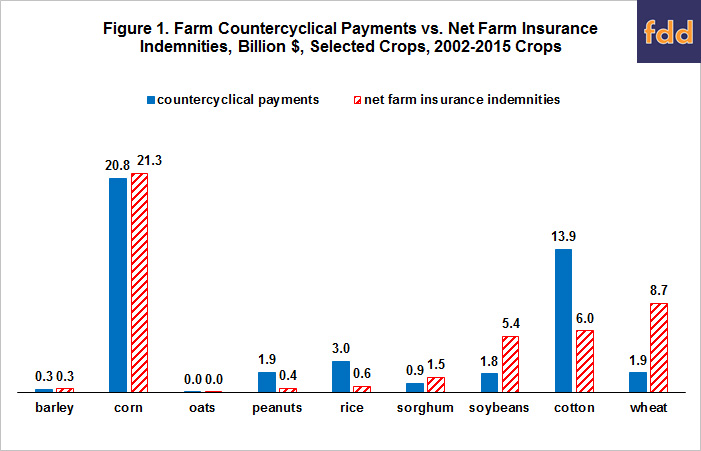 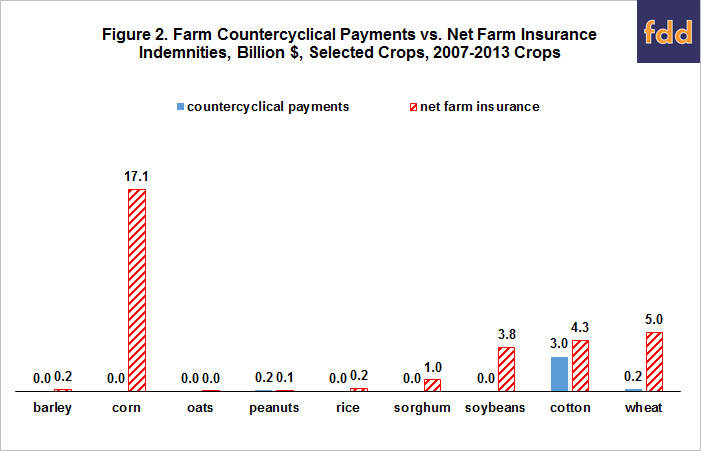 Lower Prices (2002-2006) and (2014-2015): During these periods that bracket the price run up, countercyclical payments dominate, but by less than insurance during 2007-2013. Countercyclical payments exceed 55% of countercyclical plus insurance payments except for the following crops by period (countercyclical share in parenthesis): 2002-2006 — soybeans (29%), oats (15%), wheat (11%); 2014-2015 — wheat (44%), cotton (42%), barley (22%) (See Figures 3 and 4). The countercyclical share will increase for most crops when the 2016 crop year is added. Due to high yields, early indications are that the 2016 crop may be the first since the 1994 crop for which premiums paid by farms exceed insurance indemnity payments aggregated across all farms and crops. Early indications also suggest that, if prices remain at late 2016 levels, ARC plus PLC payments for these 8 crops could exceed $8.5 billion, with corn and wheat having payments above $4.5 and $2.0 billion, respectively. 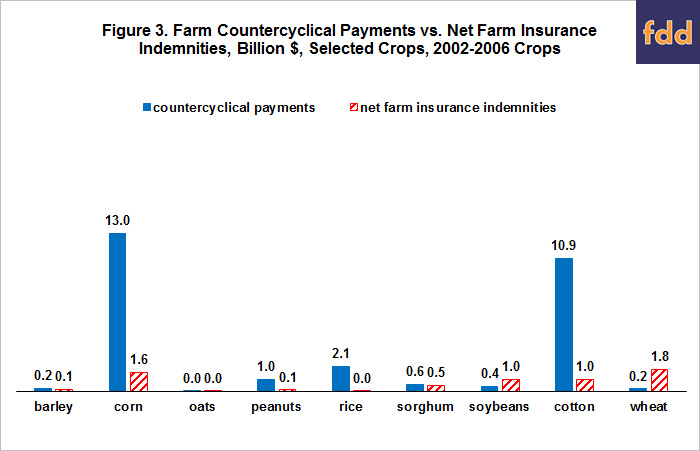 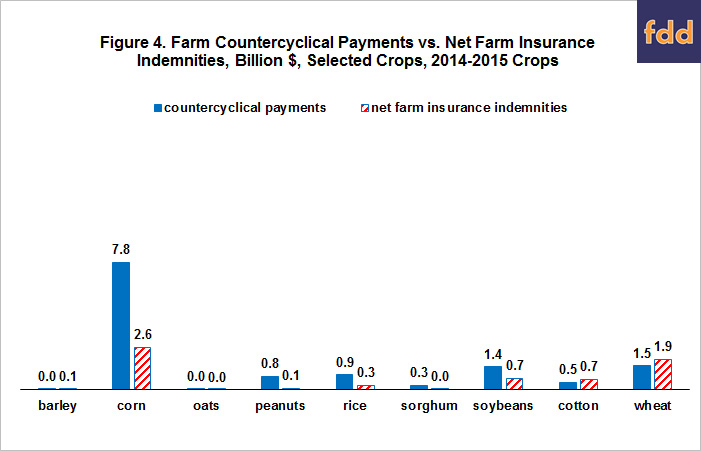