Revised projections of 2016 crop returns and 2017 crop budgets have been released. For 2016, soybeans are projected to have record-setting yields, leading to higher soybean returns than in 2015. Given that non-land costs and cash rent cuts have occurred, higher soybean returns should cause 2016 net incomes to be higher than 2015 incomes. However, crop budgets suggest very low returns and net incomes in 2017.

Table 1 shows corn and soybean returns for central Illinois farms with high-productivity farmland. The first three columns show revenues, costs, and returns for corn while the second set of three columns show results for soybeans. The 2015 column represents actual results based on data from Illinois Farm Business Farm Management (FBFM). Values for 2016 and 2017 are projections. Similar data are shown for northern, central (low-productivity), and southern Illinois farms in a publication available here. Budgets for 2017 are available here.

Highlights of 2016 projections are: 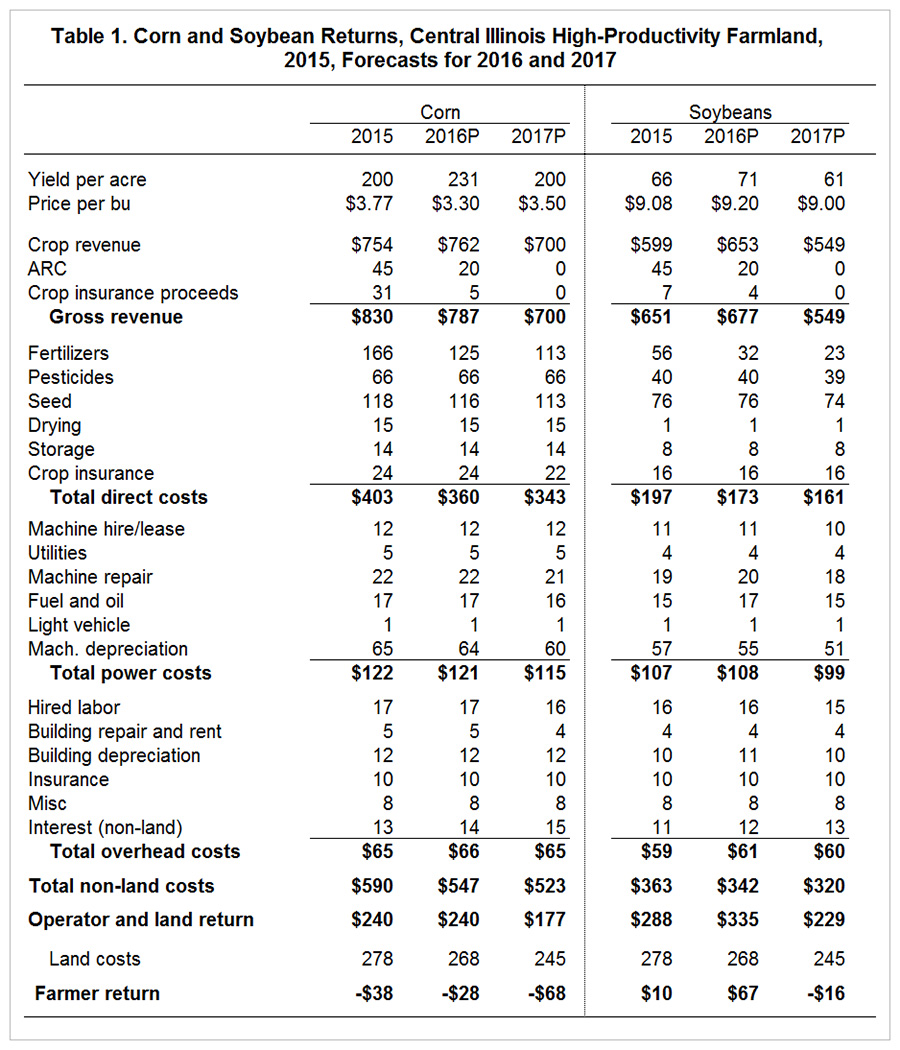 Overall, farmer returns are projected at higher levels than in 2015, although corn returns are still negative. Two factors contribute to higher returns. First are reductions in non-land costs caused primarily by reductions in fertilizer costs. Second are much higher soybean revenues. Soybeans appear to be having record-setting high yields.

Table 1 also contains projections for 2017. Assumptions built into 2017 budgets are: 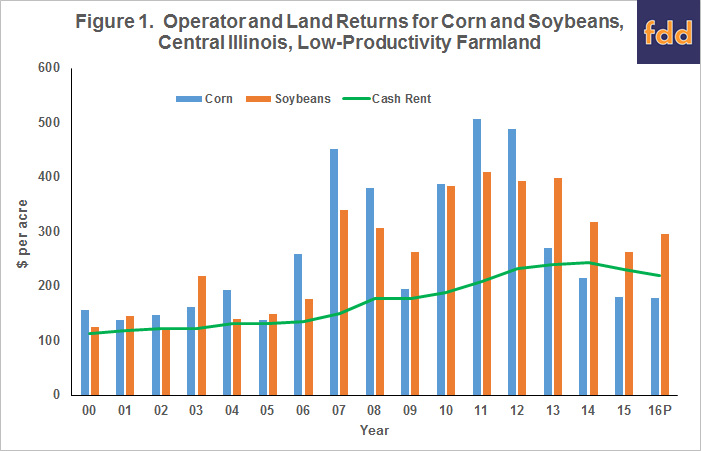 If 2017 projections come to pass, operator and land return for corn and soybeans would be below the average projected cash rent of $245 per acre. Since 2000, operator and land returns have not averaged below cash rent for both crops (see Figure 1). As a result, farmer returns are projected at -$68 per acre for corn and -$18 per acre for soybeans in 2017. These losses occur even after large projected decreases in both non-land costs and cash rents.

Much of the reason for these low returns are the low commodity prices used in the budgets. In 2016, large acreages planted and above trend yields have led to high production levels and high supplies of both corn and soybeans. These large 2016 supplies cause low price projections for 2017.

In 2015, net income for all farms in Illinois Farm Business Farm Management averaged -$2,791 per farm (see farmdoc daily September 16, 2016). A sub-set of farms that receive a majority of their income from grain operations are classified as grain farms. These grain farms had a slightly higher average income of $500 per farm. Overall, the $500 net income for grain farms was the lowest income on grain farms since at least 1995 (See Figure 2). 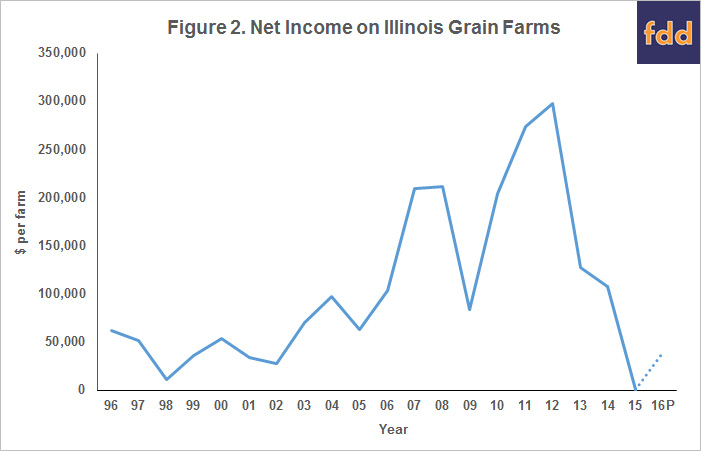 As is always the case, net incomes will vary across farms. Farms with non-exceptional yields will have lower incomes. Much of the income built into forecasts is based on high yields.

Even at this late point in the year, much could change these 2016 income forecasts, with changes in prices being an important source of uncertainty. The price used to inventory grain held at the end of the year has a large impact on net income. Perhaps the largest risk factor for lower incomes are lower soybean prices (see farmdoc daily September 26, 2016).

The 2017 corn and soybean return projections also could be used to make projections for 2017 net incomes. It seems premature to make those projections at this point, except to note that values in 2017 budgets would result in negative net incomes, significantly below those even for 2015. These low incomes result even after substantial reductions in both non-land costs and cash rents. Large yields that are increasing 2016 incomes also cause large supplies leading to lower 2017 prices. Given these price decreases, continuing cuts need to be made to both non-land costs and cash rents.

Good, D. "Too Early to Sell the 2017 Soybean Crop?" farmdoc daily (6):182, Department of Agricultural and Consumer Economics, University of Illinois at Urbana-Champaign, September 26, 2016.

Schnitkey, G. "Revenue and Costs for Corn, Soybeans, Wheat, and Double-Crop Soybeans, Actual for 2010 through 2015, Projected 2016 and 2017." Department of Agricultural and Consumer Economics, University of Illinois at Urbana-Champaign, September 2016.