Financial performance on Illinois grain farms deteriorated in 2015 compared to performance in 2006 through 2012. From 2006 through 2012, Illinois grain farms were profitable and increased financial strength. Since 2013, both profitability and liquidity decreased. In 2015, net incomes were very low, liquidity decreased, and debt increased relative to assets. 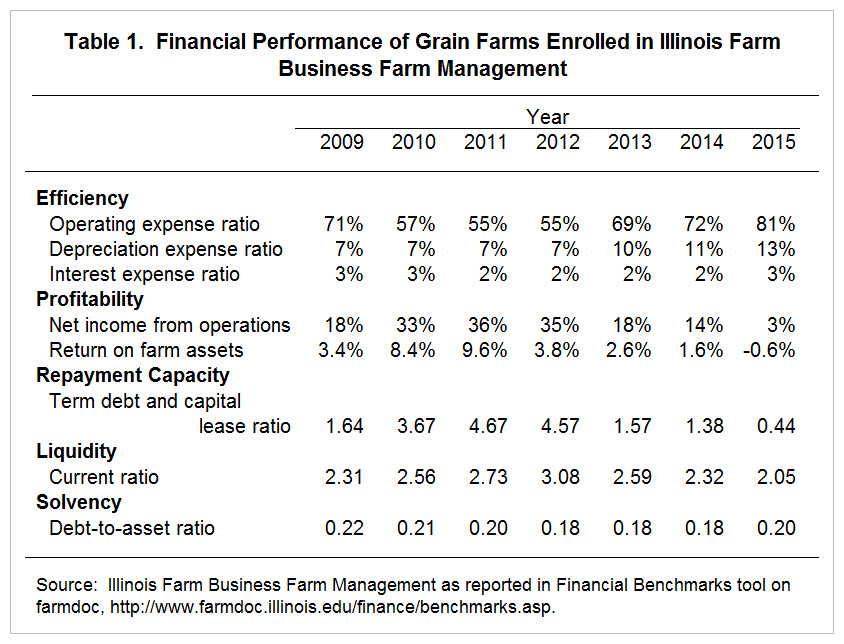 Measures in Table 1 are averages. As a result, Table 1 masks variability across grain farms. Some farms had worse performance while other farms had better financial performance than depicted in Table 1. 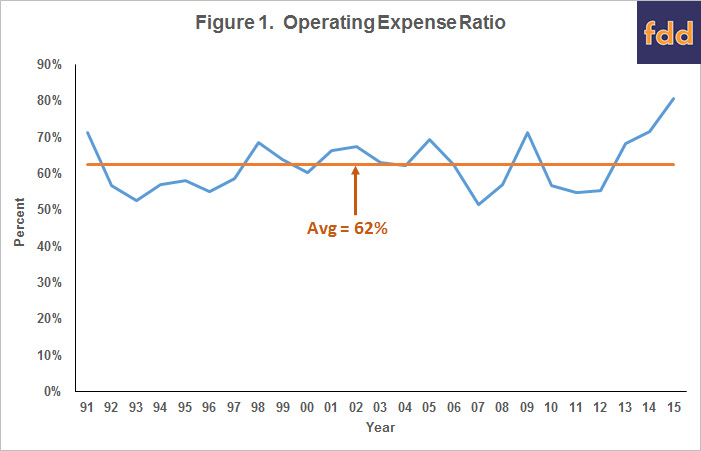 Interest expense ratio were in the 2 to 3% ranges from 2009 to 2015. Low debt levels and low interest rates cause interest expense to be small relative to other expenses.

Overall, operating and depreciation expense ratios have increased in recent years, with historically high levels occurring in 2015. As illustrated in the next sub-section, higher expenses ratios lead to lower profitability. 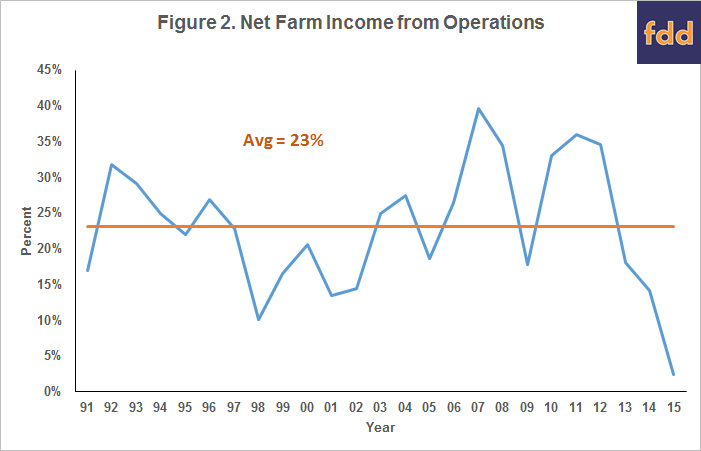 Return on farm assets follow the same time cycles as net income from operations (see Table 1). Return to assets was negative in 2015, the first negative average value from 1991-2015.

In recent years, grain farms have been generating insufficient cash from operations to meet all needs. As a result, working capital buffers built from 2006 to 2012 are decreasing. After this year, these built up buffers will be gone on many farms (see farmdoc daily, September 20, 2016).

Solvency measures the amount of debt relative to assets. In Table 1, solvency is measured by the debt-to-asset ratio. Higher ratios mean that debt is a higher proportion of assets. Decreasing debt-to-asset ratio indicated increasing solvency, and vice versa. 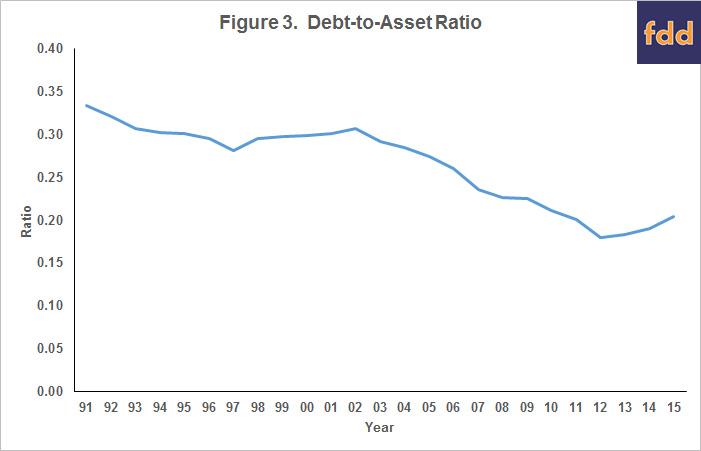 Most farms have a strong solvency position. However, the general trend of decreasing debt-to-asset ratios has stopped and reversed. Farms are beginning to incur debt as a result of operating shortfalls.

Because of high operating expenses relative to revenues, average net farm incomes in 2015 were lower than any other year since 1991. In 2015, most farms did not generate enough income to cover all obligations. Most farms weathered the low 2015 incomes by drawing down working capital. Because sufficient working capital reserves existed, few farms faced much financial difficulty. However, decreases in working capital likely will continue. By the end of 2016, working capital reserves built from 2006 to 2012 will be reduced to equivalent levels before the 2006-2012 buildup (farmdoc daily, September 20, 2016).

If net incomes do not improve, the next step will be to use financial reserves other than working capital to cover losses. Most farms have relatively high equity and plenty of solvency. As a result, liquidity shortages can be remedied in the short-run by restructuring outstanding operating loan balances as longer-termed structured debt. This strategy will provide breathing room but presents its own problems (farmdoc daily, August 30, 2016). Simply restructuring debt does not address the underlying cause of the problem: expenses are too high relative to revenue. Moreover, many lenders may be uncomfortable with the strategy of restructuring debt. Even after restructuring, the farm may not have sufficient cash flow to cover all obligations unless more cost and rent cuts occur. Financial regulations instituted since the 2008 housing crisis may cause lenders to require that a farm projects positive repayment capacity before 2017 before loans are made.

Income in 2016 likely will improve over 2015 levels due to high yields (see farmdoc daily, September 27, 2016). However, many farms still will be not generating positive cash flows. Due to low projected prices, 2017 could be a very low income year. All of this leads to a difficult planning season. Given current price projections, it will be difficult for farms to project positive cash flows for 2017. As a result, farmers will continue to be under pressures to cut non-land costs and cash rents. Lenders will be under pressures to maintain the credit quality of their farm borrowers.

Schnitkey, G. "The Danger of Refinancing." farmdoc daily (6):164, Department of Agricultural and Consumer Economics, University of Illinois at Urbana-Champaign, August 30, 2016.