Figure 1 shows yields on ten-year constant maturity Treasury notes. Ten-year Treasury yields reached highs of over 15% in 1981. Since the 1981 highs, Treasury yields have been on a general downward trend, reaching a low of 1.37% on July 5, 2016. 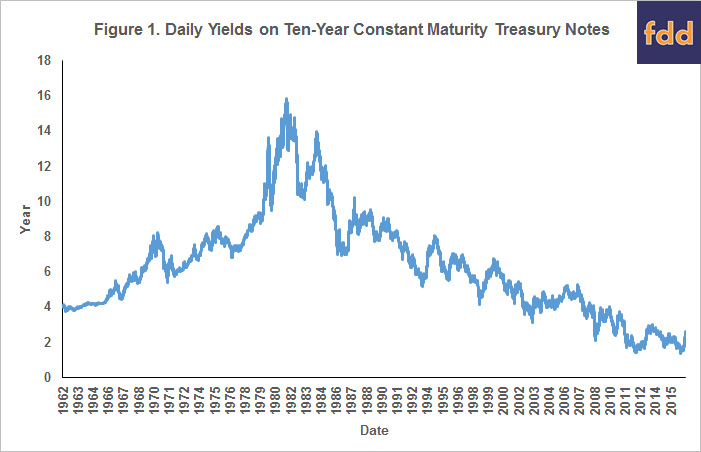 While yields have increased, the 2.60% yield on December 15th is not a high yield. Nor is the increase between November 7th and December 15th the only period of increases in recent times. For example, yields increased from 2.51% on October 23, 2013 to 3.04% on December 31, 2013, after which rates fell (see Figure 1). In and of itself, the late 2016 yield increase does not suggest a significant adjustment down in farmland prices.

However, this increase could be important if it signals continuing rate increases. In the popular press, reasons for the yield increase include anticipated increases in Federal government infrastructure spending and anticipations of increases in economic growth. If these expectations are realized, sustained increases in interest rates could occur.

A straight-forward way of evaluating the impacts of both cash rents and interest rates on farmland prices is the following capitalization formula:

We have used this approach in the past to compare Illinois farmland prices to capitalized values (Illinois Farm Economics: Facts and Opinions, October 18, 2010, Choices, 2nd Quarter 2011, farmdoc daily, October 20, 2015). The red line in the following graph shows the capitalized values for Illinois. Also shown are average farmland prices for Illinois. 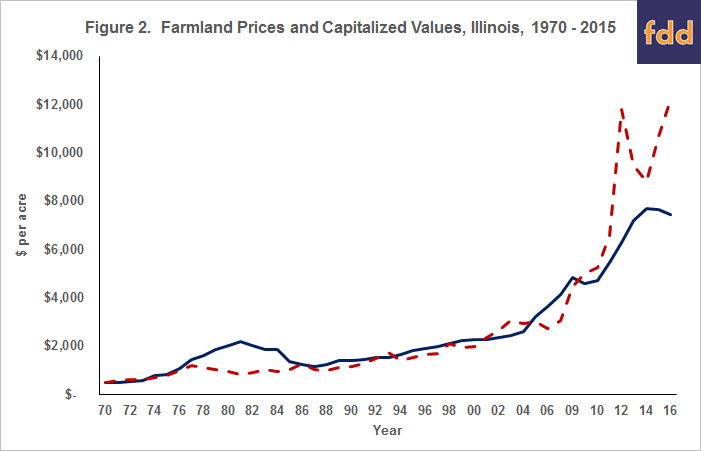 The Federal Open Market Committee (FOMC) is a branch of the Federal Reserve Board that determines the direction of U.S. monetary policy. In its December 2016 projections release, most FOMC participants suggest a Federal fund rate near 3.0% would be appropriate in the long-run. Since 1962, the ten-year Treasury yield has average 1.06% higher than the Federal fund rate, suggesting a 4.0% ten-year Treasury yield if a 3.0% Federal fund rate target is obtained. Given the 2016 cash rent of $221 per acre, a 4.0% yield results in a $5,525 per acre capitalize value, $1,925 below the 2016 farmland price. If those rates occur, the above capitalization formula suggests that farmland prices could face significant downward pressures.