The election of Donald Trump in conjunction with a Republican Majority in Congress opens a new chapter of farm bill history. While history may not repeat itself, it does seem to recycle, and it is that recycling that could offer perspective on the issues, politics and challenges facing the upcoming farm bill effort (Logevall and Osgood 2016). With that in mind, this article begins a review of chapters in farm bill history (farmdoc daily, November 11, 2016). It begins with the last farm bill written by a united Republican government, the Agricultural Act of 1954.

Americans elected President Dwight D. Eisenhower (R-KS) in 1952 and his coattails brought Republicans to power in the House and Senate. Eisenhower was the first Republican elected President since Herbert Hoover, who was defeated by Franklin Roosevelt in 1932 during the depths of the Great Depression. FDR was elected 4 times; he died in office in 1945 and was succeeded by Harry Truman, who won election in his own right in 1948.

Farm policy had entered a very contentious period after World War II. Republicans had last controlled Congress in 1948. President Truman ran against them as a ‘do-nothing’ Congress, which had managed to stick a “pitchfork in the farmers’ back” (Hansen 1991). The 1948 Farm Bill had been the first debate after the war and it turned out to be the opening round of a long disagreement over parity policy. Many in the farm community, especially in the South and Great Plains, wanted to continue the high, fixed loan rates (90% of parity) established during the war. Midwestern farm interests, especially Republicans and the American Farm Bureau, sought an end to the high, fixed loan rates and the acreage controls that accompanied them. In 1948, Republicans and Democrats had struck a hastily-arranged, politically-expedient compromise to extend 90% of parity for one more year before reverting to the flexible schedule designed in 1938. Democrats recaptured Congress in 1948 and quickly reversed this policy in 1949, returning to 90% of parity and delaying reversion to flexible loan rates. The 1949 Act was soon followed by the Korean War.

The Korean War ended in 1953. Post-war technological advances were rapidly boosting crop yields and farm productivity which, coupled with a falloff in wartime demand and the high, fixed loan rate policy, had started producing massive surpluses of the supported commodities. Figure 1 shows the increase in Federally-owned surpluses of the three major commodities (corn, cotton and wheat) during the Fifties (Cochrane and Ryan 1976). Congress and the President were trying to bring the growing surplus under control. Their first attempt was legislation that authorized the use of surplus commodities for foreign food aid and to help allies. The program they created remains in place today and is reauthorized in the farm bill. It is now known as Food for Peace (or P.L. 480). 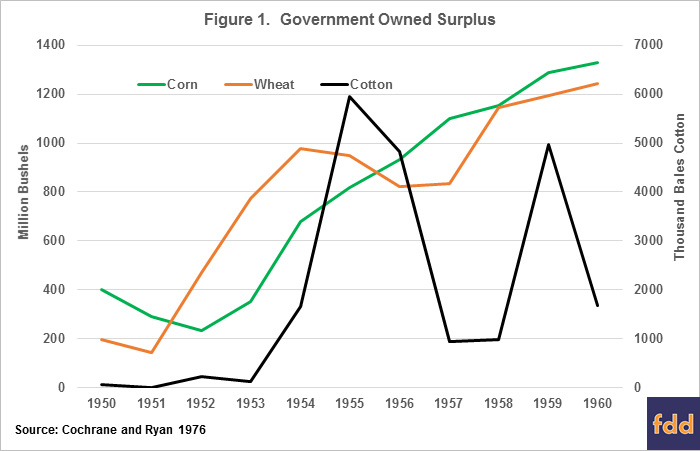 Neither P.L. 480 nor use of surplus commodities for foreign aid were all that controversial; dealing with the parity system of commodity support was. President Eisenhower and his Secretary of Agriculture, Ezra Taft Benson, were pushing Congress to reform the support system. Specifically, they wanted to bring an end to 90% of parity loan rates. They were looking to introduce more market-orientation to the programs and provide more flexibility to the farmer. They faced strong resistance in Congress, especially in the Ag Committees.

The House Ag Committee, under the leadership of Chairman Clifford Hope (R-KS), stuck to 90% of parity in its farm bill. Senate Ag Chairman George Aiken (R-VT) tried to push his committee to the flexible loan rates preferred by the President but lost in mark-up to a group led by Senator Milton Young (R-ND). Both committees and 90% of parity lost, however, on their respective floors. With the backing of President Eisenhower and the American Farm Bureau, Representative Robert Harrison (R-NE) pushed an amendment on the House floor as a compromise on loan rates – minimum flexibility from 82.5% to 90% of parity. His amendment narrowly won out in the House. On the Senate floor, Senators narrowly agreed to the same amendment when it was offered by Senator Andrew Schoeppel (R-KS) and the provision survived conference to become law. It was the first real step, albeit a minor one, away from 90% of parity; the battle over the policy would continue.

Surpluses continued and continued to depress crop prices while costs increased in a booming post-war economy. Farmers were caught in a cost-price squeeze and were not happy with the shift in flexible loan rates contained in the 1954 Act. The loan rate created a floor under crop prices and lowering it under flexible calculations would lead to lower prices for the farmer. They punished Republicans in the mid-term elections in 1954, returning Democrats to the majority in both the House and Senate. Democrats would hold their Majority in the House until 1994.

Farm interests continued to fight over parity farm policy until 1965, splitting the farm coalition against itself along regional lines. The 90% of parity loan rate did not return, however, largely because President Eisenhower’s veto pen, the policy’s continued failure to control surplus and increasing resistance from Midwestern corn interests prevented it. In 1956, they would turn to conservation to try and help reduce acreage and surplus. In 1958, corn interests won the right to vote themselves out of the parity system all together in a referendum. Surpluses continued to challenge farm policy until the early 1970’s as the technological revolution in farming kept increasing yields.

While there are few parallels between 1954 and 2016, there are some in the farm policy debate. The fight over parity was regional, largely between corn and cotton interests in the Midwest and South, respectively. There are echoes of that disagreement in current policy debates. Similar to 90% of parity, the fixed reference prices in PLC do not change over time and are favored by Southern commodity interests. Similar to flexible parity, the benchmark price used in ARC-CO will adjust through use of the five-year Olympic moving average and is supported by Midwestern commodity interests. This debate may be magnified in the upcoming farm bill by another period of relatively low crop prices that are challenging farm incomes.

Technological changes had a major hand in the surpluses of the Fifties. Technology may be transforming farming again, such as through genetic engineering, precision agriculture and data. How this new round of technological advancement alters farm policy and farm bill debates is yet to be seen.

There are important differences, however, aside from the vast distance between farming in the 50’s and that of today. Politically, Southern commodity interests are aligned with the Republican Party, Majority and President rather than in opposition. In addition, farm bills today include much more than commodity support policy, most notably a robust crop insurance program, conservation policies and the Supplemental Nutrition Assistance Program (SNAP). Finally, and possibly most consequentially, farm bills today are written under difficult budgetary disciplines first put in place in 1974. The focus on budget discipline and reducing Federal expenditures creates a substantially-different Congressional environment, especially given that farm programs involve payments more than loans.

Today, the 1954 Farm Bill debate stands mostly as a lesson about how difficult it can be to make major changes to farm policy. Changes are generally accomplished only in small steps and increments. This is never more accurate than when prices are relatively low. It also serves as a reminder that regional commodity policy disputes can be long running, highly-contentious and politically-fraught. Such disputes can damage the policies, the politicians and the farmers themselves. 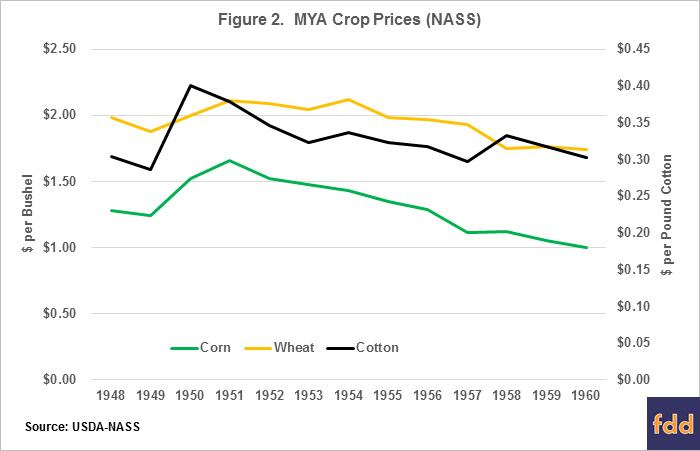