Trend yields are calculated using data from 1972 through 2016. A linear line was fit through these yields using ordinary least squares. The 2016 trend yields were based on these linearly fit relationships. 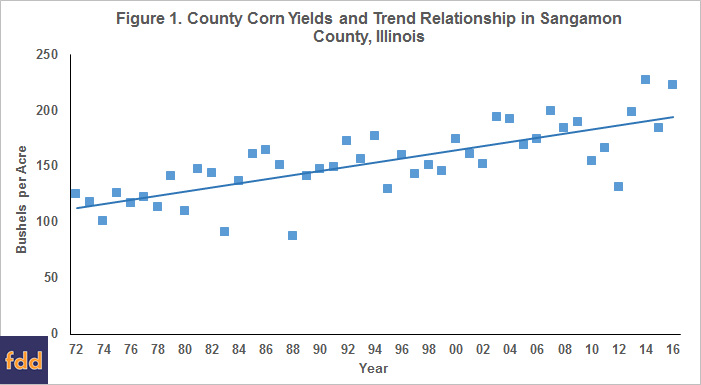 The solid line in Figure 1 is the linear trend. This straight line implies an average yield increase of 1.85 bushels per year. Alternative forms could be used in finding trends such as those that allow increases in trend yields to escalate or slow down over time. Statistical tests suggest that linear trends are adequate to model trend increases over the 1972 to 2016 period.

The following maps report actual minus trend yields. By calculating trend yields, the inherent productivity of the farmland is taken into consideration, and actual yields are stated relative to that productivity. 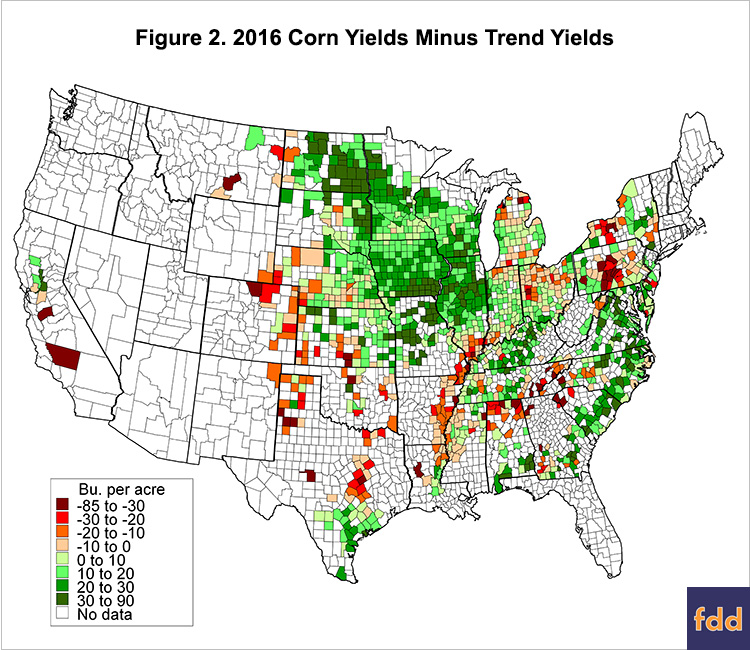 Besides Indian and Ohio, below trend yields predominated in Michigan, New York and Pennsylvania, a series of counties in the south from western North Carolina to Alabama, parts of the great Plains and Texas, and a string of counties along the Mississippi River. The Mississippi River counties begin in southern Indiana and Illinois, proceeding through southeast Missouri, Arkansas, Louisiana, and Mississippi.

Exceptional yields for soybeans predominated over much of the nation (see Figure 3). Much of the corn belt and Mississippi River basin had above trend yields. Below trend yields occurred in New York, Pennsylvania, western North and South Carolina, and some counties in Georgia, Tennessee, and Alabama. 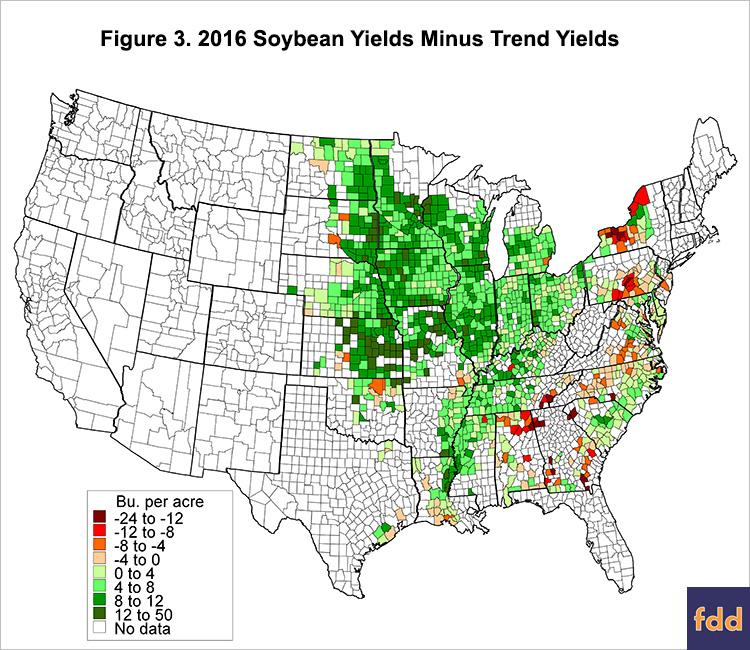 Above trend yields across the nation should be expected as national yields were above expectations. In recent years, soybean yields have been exceptional (farmdoc daily, October 25, 2016)

Those areas with above trend yields will have relatively higher incomes than those areas that had below trend yields. In 2016, lower grain farm incomes will be more pronounced in the eastern corn belt and particularly in Indiana and Ohio.

On the other hand, above trend yields had a positive impact on net incomes of farms in Illinois and the western corn belt. As an example, take the 2016 corn yields in Sangamon County described above. The midpoint of the corn range projected by WASDE is $3.40 per bushel. Multiplying $3.40 by the 2016 actual corn yield of 222 bushels per acre gives $755 of crop revenue per acre. This $755 of crop revenue is 95 per acre higher than the $660 per acre revenue had a trend yield occurred ($660 = $3.40 price times 194 trend yield). Clearly, above average yields had a positive impact on incomes in Sangamon County.