At its annual Agricultural Outlook Conference in February, USDA projected that planted acres of corn would decrease from 94.0 million acres in 2016 to 90.0 million in 2017, a decrease of 4 million planted acres. At the same time, soybean acres are projected to increase from 83.4 million acres in 2016 to 88.0 million in 2017, an increase of by 4.6 million acres. Herein, we evaluate historical changes in acres across counties, thereby providing perspective on where likely 2017 acreage changes may occur. 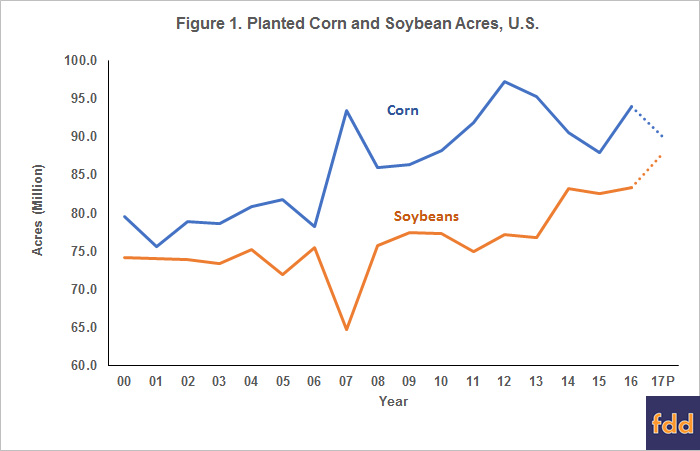 Figure 2 shows a map color coded to give changes in acres from 2011 to 2016. Counties colored blue had increases in acres, counties coded in orange had decreases in acres. Those counties that are yellow had essentially the same acres in 2016 as they did in 2011. 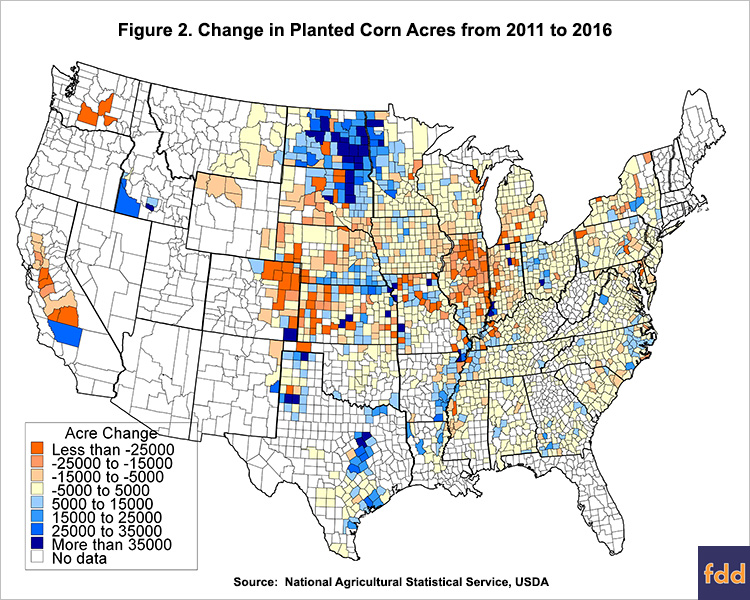 Several areas had pronounced increases. In particular, the northern Great Plains had sizeable increases. Between 2011 and 2016, North Dakota increased acres by 1.2 million, South Dakota by .4 million, and Minnesota by .4 million. Another area of sizable increase was Texas, with the planting .9 million more acres in 2016 than in 2011. Counties along the Mississippi River, especially in Arkansas, increased acres as well. 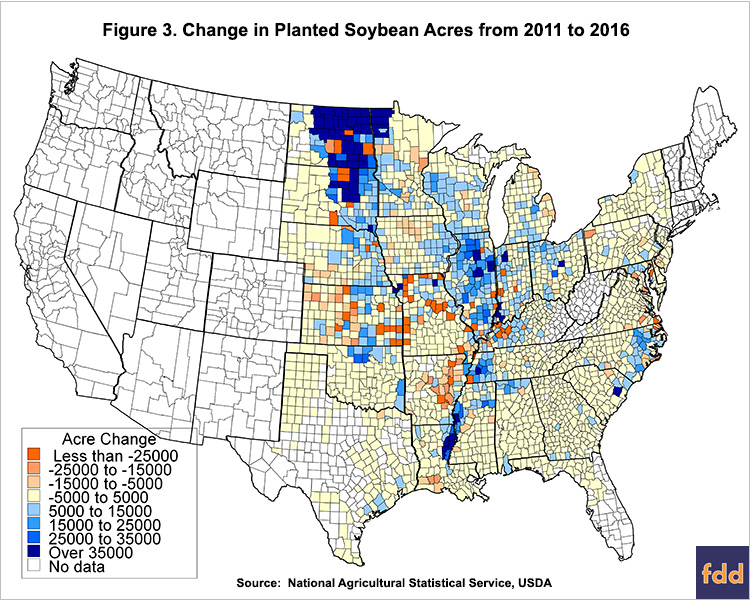 Other areas of significant increase were Illinois with a 1.1 million acres increase in planted soybeans. Planted acres also increased along the Mississippi River, parts of Kentucky and Tennessee, as well as areas in North and South Carolina.

Perspective on Changes for 2017

Areas with large acreage changes in the past likely will contribute in a significant way to acre changes from 2016 to 2017. These areas include the upper Great Plans, Texas, and the corn belt.

Texas could see acreage shifts away from corn. Cotton prices look favorable, and an increase in cotton acres could contribute to fewer acres in corn.

Illinois and the corn belt in general could see shifts from corn to soybeans. Returns from crop budget suggest soybeans will be more profitable than corn (farmdoc daily, December 6, 2016), suggesting a shift is possible.

While budgets suggest the possibility, acre shifts have been slow in coming. Perhaps the most likely area where a shift will occur is where corn acres exceed soybean acres by a considerable margin. Corn acres divided by soybean acres exceed 1.0 in many counties in southern Minnesota, Iowa, northern and central Illinois, and western Indiana (see Figure 4). Bringing these areas back closer to a 50% corn – 5% soybean rotation, indicated by 1.0 corn divided soybean value, could increase profits suggesting that switches are possible. 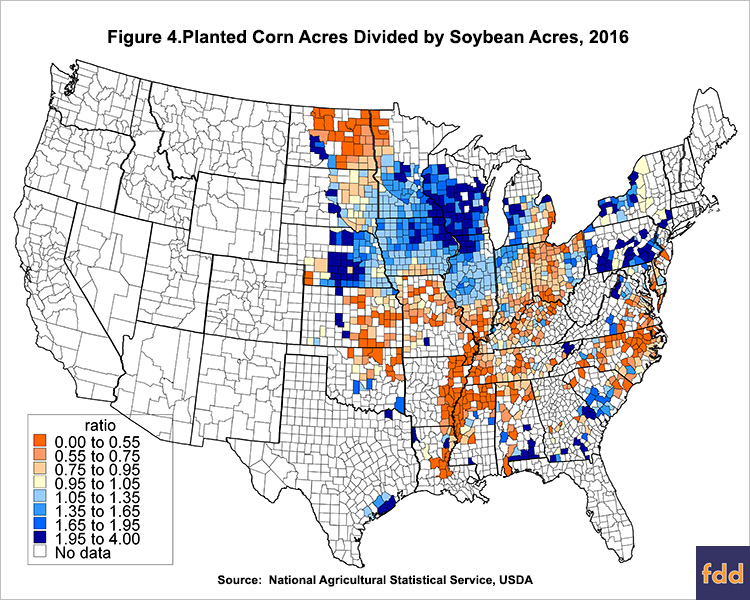 Areas that experienced large acre changes in the past likely will be the ones where acres changes occur in 2017. This suggests focus on the upper Great Plains, Texas, and Illinois and the corn belt more generally. Continued corn and soybean acreage increases in the upper Great Plains seem reasonable to expect, except if prevented planting acres increase significantly. Texas could experience reduced corn acres. Budgets suggest switches to more soybeans from corn in the Midwest, although this is the case in previous years. Further indications of planting attentions will be received with the release of NASS’s Prospective Plantings report on March 31.

Johansson, R. "Outlook for 2017." US Department of Agriculture, Office of the Chief Economist, February 2017. https://www.usda.gov/oce/forum/2017_Speeches/Johansson_Outlook_2017.pdf