Trade continues to occupy a prominent place in current political and policy debates. While the larger trade debate involves many complex aspects, farmers focus on exports of the major commodities such as corn. As discussed previously, the U.S. is the world’s largest exporter of corn but exports account for a relatively small portion of U.S. production and usage (farmdoc daily, December 22, 2016). This article follows by looking closer at corn exports.

Figure 1 illustrates the direct exports of U.S. corn, which grew significantly throughout the 1970s, reaching more than 60 million metric tons (MT) during the 1979 and 1980 marketing years. Since 1980, corn exports have averaged just under 47 million MT (1.845 billion bushels) per year, or 18 to 19% of total annual production. However, since 2010, the share of US corn exported has averaged just 13% of annual production. 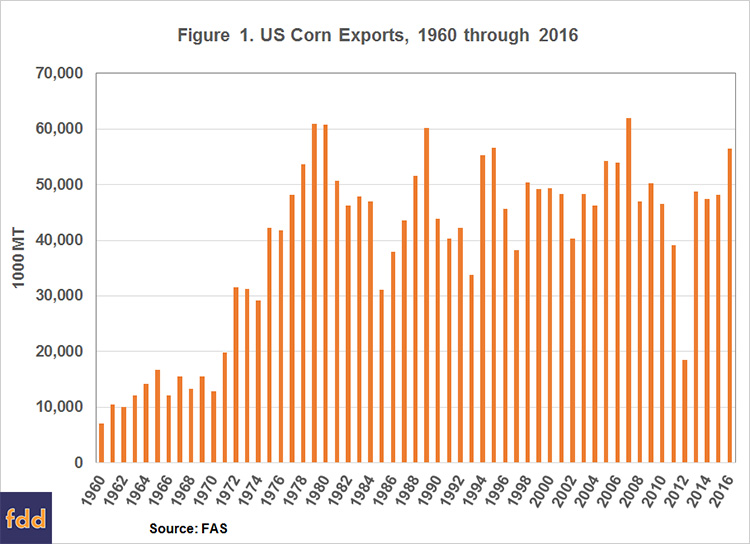 Corn Use for Livestock Feed and Ethanol Production

By comparison, Figure 2 illustrates that livestock feed and ethanol production represent the largest direct usage of US corn over the past decade. Corn use for livestock feed grew steadily from 1960 through 2005, but declined during the last half of the 2000s due to rising corn prices during the same period. Feed use has again been generally increasing since the most recent low in 2012, accounting for an average of 38% of total production since 2010. 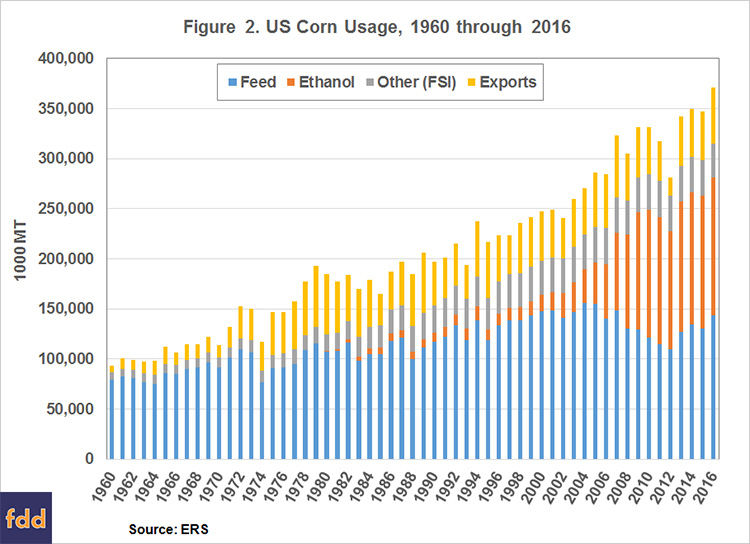 Corn use for ethanol has grown dramatically since the 1980s, representing nearly 39% of domestic usage since 2010. In addition to ethanol production, this also implies growing production of distillers grains (DDGS), the value of which rely heavily on use as feed for domestic livestock markets and, to a lesser extent, feed export markets. Figure 3 shows that annual production of DDGS has reached an average of 40 million MT since 2010, with exports growing to nearly 23% each year over the same time period. 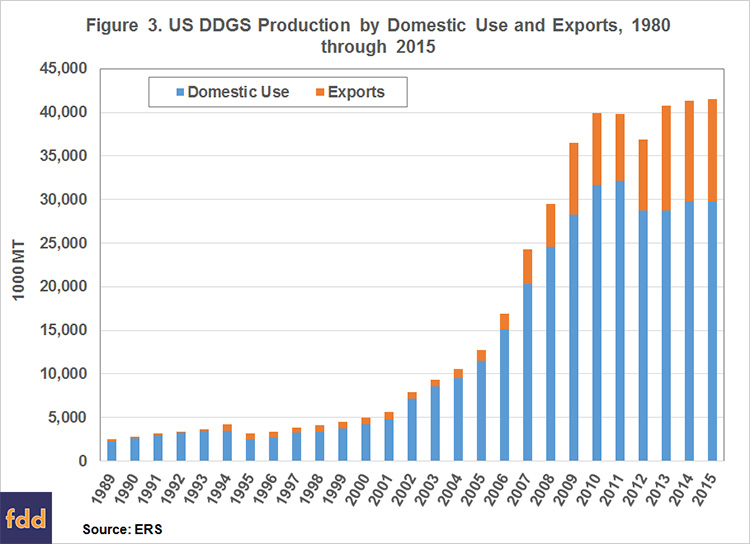 Thus, while direct exports of US corn have been relatively stable since the mid-1970s with a declining share of total production, the other main sources of use for corn – livestock feed and ethanol production – also rely heavily on trade and export markets. These represent indirect exports of U.S. corn. 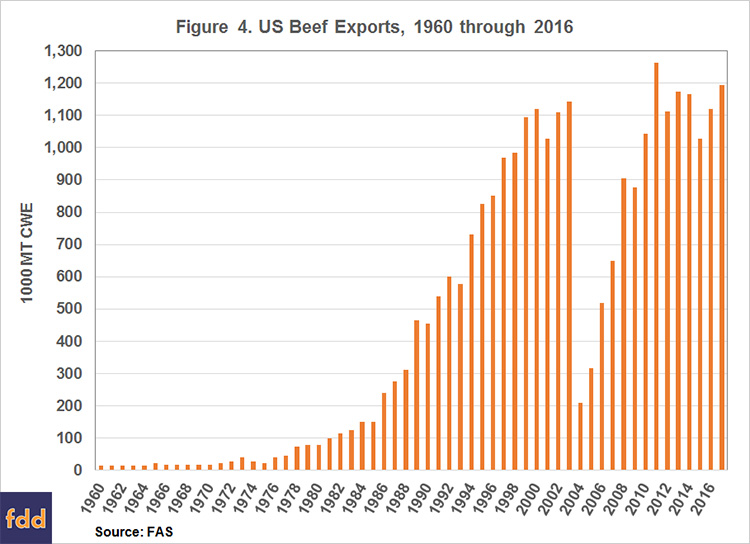 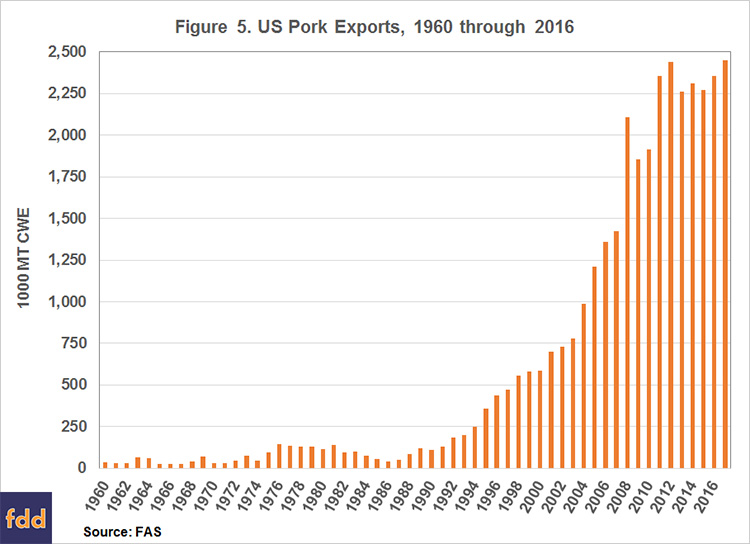 In Figure 6, the exports of US broilers have been growing at rapid rate over the past 35 years with an average annual growth rate of over 9% since 1985. Broiler exports have average over 3.1 million MT since 2010, representing 18% of total domestic production. The export share for domestic broiler production averaged just 2% from 1960 to 1979 and just 9.6% from 1980 to 1999. 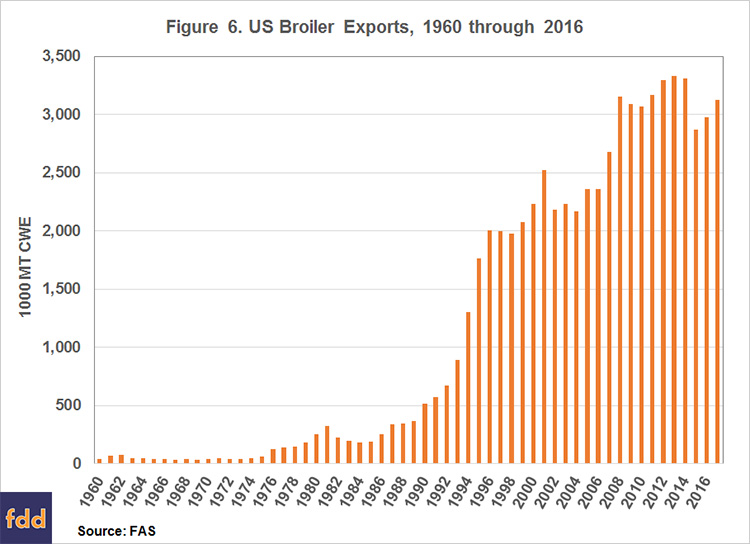 Trade markets are critically important for US corn producers. Direct exports of US corn have varied around an average of 47 million MT per year since 1980. With annual production levels continuing to increase, this implies that the share of US corn exported has tended to decline, averaging close to 20% since 1980 but falling to an average of 13% per year since 2010. However, the larger usage share of US corn – domestic use for livestock feed and ethanol production – are also largely dependent on trade and export markets, generating indirect export demand for US corn.

Corn use for ethanol now represents just under 40% of total corn use, generating an average of 40 million MT of the DDGS co-product. Roughly 23% of US DDGS production is exported, with the remainder used as feed by domestic livestock industries. Adjusting for DDGS exports increases the corn export share from 13% to approximately 16% (Schnepf, 2011).

A rough estimate of the indirect exports of corn associated with feeding livestock would be to apply the feed and export shares for each livestock category to the 45% feed share for corn which accounts for DDGS. The estimated shares of feed grains fed to cattle on feed, hogs, and poultry are 24%, 27%, and 33%, respectively (Schnepf, 2011).

Accounting for these indirect corn exports via livestock feed and the exports of DDGS, the total export share of US corn increases from 13% to approximately 22.3% of annual production, or an additional 1.3 billion bushels of indirect corn exports associated with a 14 billion bushel corn crop. Thus, focusing on direct export demand for corn understates the reliance on agricultural trade and export markets for US corn producers.

Baylis, K. "A Quick Primer on US Agricultural Trade." farmdoc daily (6):237, Department of Agricultural and Consumer Economics, University of Illinois at Urbana-Champaign, December 22, 2016.