All 50 U.S. states provide some form of preferential tax treatment for agricultural land (see Sherrick and Kuethe, 2014). These tax policies were adopted state-by-state in response to the rapid loss of farmland associated with the rapid expansion of urban land use activities, following World War II. The majority of States tax farmland through a form of use-value assessment. Under use-value assessment, agricultural lands are taxed according to the potential earnings from agricultural production, rather than the full market value of the property. The goal of these programs was to limit farmers’ tax liability based on the belief that, in many areas, farmland market values were predominantly driven by the potential conversion to non-agricultural uses, such as housing or commercial development. The mechanisms used to measure potential earnings from agricultural have come under fire in a number of states, as a result of the recent declines in farm profitability. Farmers in a number of states have argued that the measures of “potential” earnings drastically lag the realized decline in farm profit margins.

The two most common concerns expressed by farmers are that (1) the effective tax rate exceeds the underlying value of the property and (2) the tax burden accounts for an outsized share of farm production expenses. In order to examine these two concerns, we rely on a number of relevant economic measures provided by the USDA Economic Research Service’s Farm Income and Wealth Statistics database. We examine data from the most recent available year, 2015. 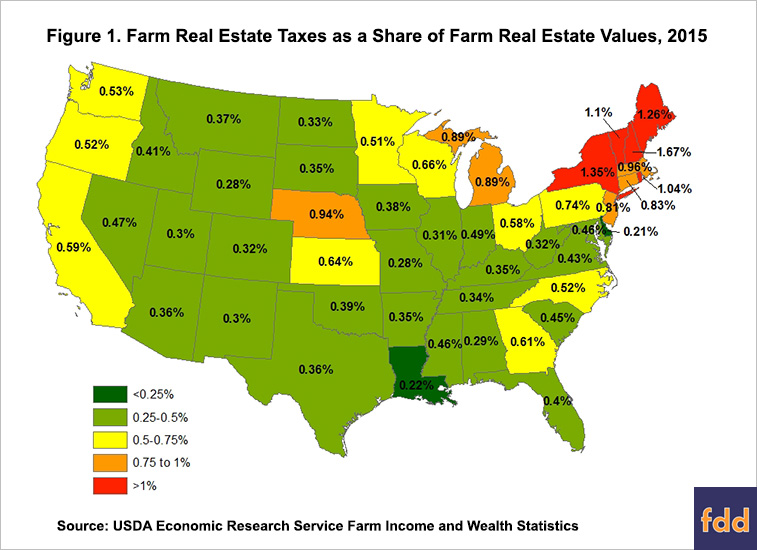 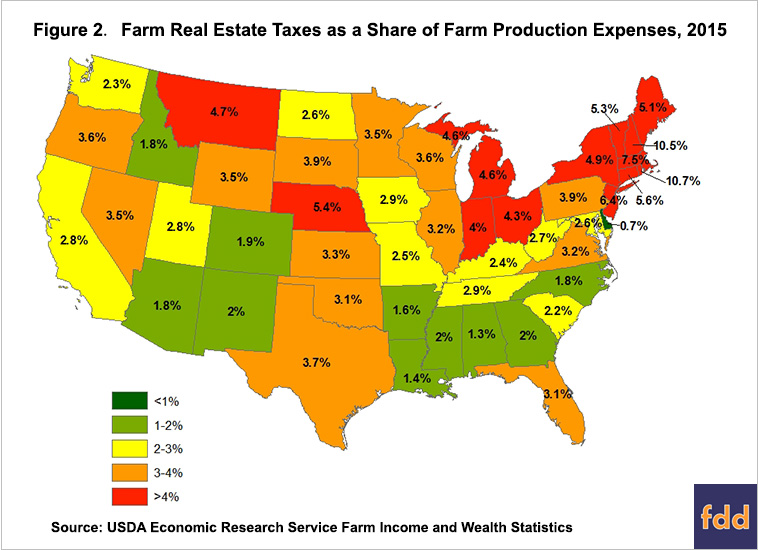 While farmland owners in all 50 States are given some form of preferential property tax treatment, a continued decline in farm profit margins will likely result in farmers requesting additional property tax relief. These debates are mostly likely to occur in areas in which the effective tax rate is higher than national average or in states in which property taxes represent a large share of production expenses.

Sherrick, B. and T. Kuethe. "The Taxation of Agricultural Land in the United States." Policy Matters, Department of Agricultural and Consumer Economics, University of Illinois, October 15, 2014. http://policymatters.illinois.edu/the-taxation-of-agricultural-land-in-the-united-states/