The state of U.S. agricultural production is changing. Over the next decade, increases to minimum wage and other changing labor regulations will have a dramatic impact on fruit, vegetable and other labor-intensive agricultural production in the U.S. These impacts will be on top of evolving immigration policies and trends, which have been receiving a lot of attention in mainstream media (e.g., Los Angeles Times, USA Today) as well as farm media (e.g., Western Farm Press, The Packer) in recent months.

Many of these changes will undoubtedly be welcome to farmworkers and their families. This has been extensively discussed elsewhere (see, for instance, this Berkeley policy brief on California’s minimum wage), as well as the ongoing debate over what is an “appropriate” minimum wage (e.g., these perspectives for and against higher agriculture minimum wages).

Here we consider the implications for agricultural production and farm management, which we believe will be substantial. While immigration is generally a national issue, many labor laws are set at the state level. Most U.S. fruit and vegetable production takes place in states that have significantly raised minimum wages in the last decade and plan further increases into the 2020s. Several of these states are also considering or have already mandated new benefits for farmworkers, such as sick leave and overtime. Many fruit and vegetable farmers, as well as other farms that rely on non-family labor, such as dairy farms, will need to reduce their labor use, increase productivity or take other measures, such as finding new markets, to remain viable.

Farmers in the top 10 fruit- and vegetable-producing states (Figure 1) in the U.S. saw the minimum wage increase from 11% to 45% between 2008 and 2017. This range reflects important differences between these states, which we divide into “low-wage” and “high-wage” groups. 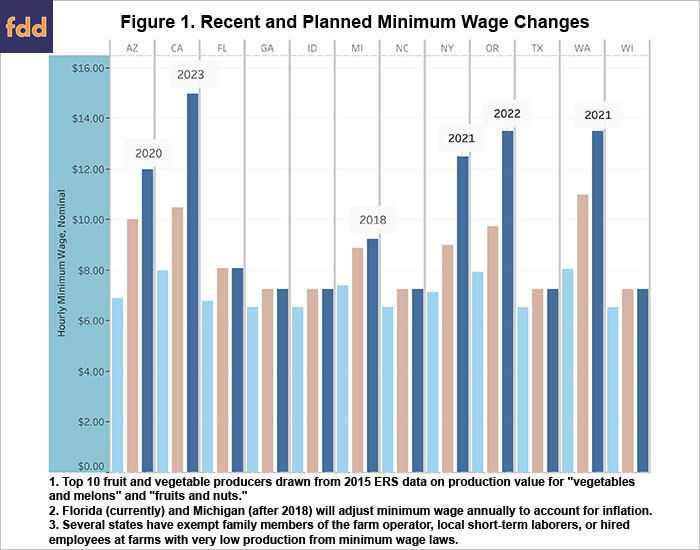 The five “low-wage” states use either the federal minimum wage or a state minimum adjusted for inflation. The five states in the “high-wage” group have current minimum wages at or above $9 per hour and have committed to future increases. California, by far the largest fruit and vegetable producer in the U.S., will raise its minimum wage to $15 by 2023 and has also mandated overtime for farm workers. Washington ($13.50 by 2021) Oregon ($13.50 by 2022), New York ($12.50 by 2021), and Arizona ($12 by 2020) also plan to raise the minimum wage. Combined, the high-wage group represents more than two-thirds of U.S. fruit and vegetable production; California alone is 55% of production value (Figure 2). 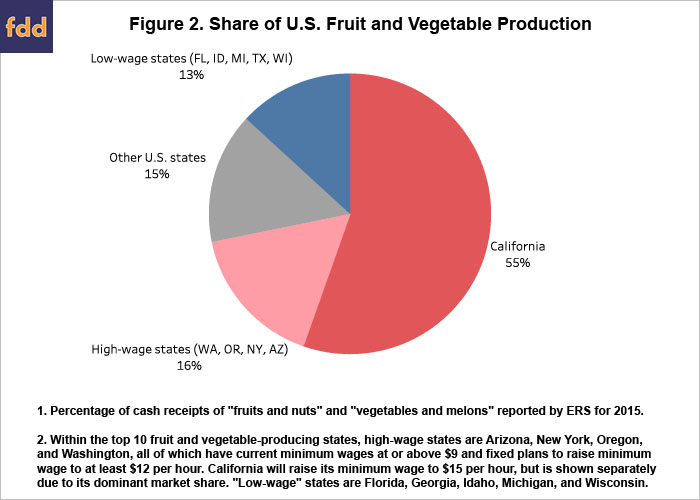 While the average U.S. farmworker has wages well above the legal minimum, the minimum wage can influence average farmworker wages. In most states, average farmworker wages have been at least $2 per hour higher than minimum wage, and this “gap” has been maintained throughout several minimum wage increases. The minimum wage will increase the government-calculated “adverse wage” for H2A guest workers and can tighten the overall U.S. agricultural labor market. Furthermore, some above minimum-wage workers may demand higher wages in response to the increase at the lowest end of the pay scale. In New York, we have heard many reports of increases in the overall pay scale for farmworkers in response to recent minimum wage increases.

In addition to higher wages, state mandates on worker benefits and protections raise the cost of labor to farmers. Again, such changes are happening in major fruit and vegetable states. Several states have extended paid sick leave or health insurance entitlements to agricultural workers. Most significantly, in 2016, California adopted new overtime regulations allowing farmworkers to claim overtime after 10 hours of daily work or 60 hours over a week. By 2022, overtime for agricultural workers will be based on an eight-hour day. Although California is the only major producer that has adopted overtime for agriculture to date, New York and Washington have seriously considered similar proposals. 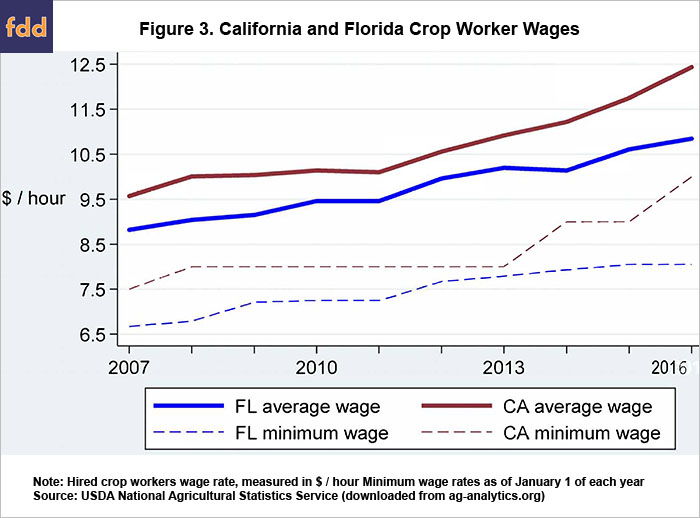 Given the magnitude of the increases to minimum wage in these states and other changes, it is inevitable that farm businesses producing labor-intensive crops or livestock will be affected. Where farm-level data is available, studies suggest that farms will face higher labor expenses. A 2017 study of New York apple growers, for example, found that labor already represented 40-50% of operating expenses and that the state’s scheduled minimum wage increases would raise hourly labor costs by 43% between 2015 and 2021. If these increases were coupled with overtime rules similar to California’s, New York farmers could expect 2021 wages to be 52-70% higher than in 2015 (Wells and Ifft, 2017). Further, increasing wages may change the economics of technology adoption for New York fruit farms. Another study found a nearly one-third increase in total labor expenses for New York dairies based on minimum wage increases. While these studies are based on partial budget approaches that don’t reflect the dynamic adjustment to changing labor markets, these findings strongly indicate that pressure on wage levels will be a serious strain for many U.S. farms.

The next decade will entail substantial transitions for labor-intensive agriculture across the U.S. In addition to various forces that are tightening access to immigrant labor, minimum wage and farm labor regulation will increase in several key states. The magnitude of labor costs increases will not be marginal and could alter the structure of fruit, vegetable and other specialty crop production, in addition to affecting some livestock farms.

It is difficult to predict the impacts of such a large adjustment, but change is certain. This is a rich area for research with many unanswered questions. Several outcomes are possible, including accelerated mechanization and technological innovation; increased fresh produce costs and imports; and a continued squeeze on mid-size producers. There may be regional shifts in production patterns across the U.S. and in some places different production systems such as ‘local foods’ may become more competitive. Improved human resource management and labor productivity will be imperative. From a farm management perspective, paying a competitive wage, maintaining a safe and rewarding work environment, and doing what it takes to retain the existing workforce will be imperative. Private (i.e. equipment manufacturers) and public (i.e. cooperative extension) innovations will certainly play an important role in the coming transition. Farms will need to use a variety of strategies to adapt to the new farm labor market environment.