USDA will release the next Prospective Plantings report on March 31, 2017. This report will contain survey-based estimates of producer planting intentions for all major US crops and will provide the first survey-based measure of upcoming supply for the new crop year. Good and Irwin (2011) provide a thorough review of the survey procedures used by the USDA. Last year (March 25, 2016) we looked at historical errors associated with Prospective Plantings estimates. Several other farmdoc daily articles (e.g., March 8, 2017; March 21, 2017) examined additional issues related to USDA acreage reports. The purpose of this article is to compare USDA Prospective Plantings estimates with private expectations of planting intentions that typically become available a few days before USDA report release.

How do the USDA Prospective Plantings estimates differ from private expectations?

Private expectations data for corn and soybeans for 1983-2000 marketing years is an average of forecasts by Conrad Leslie and Informa Economics (formerly Sparks Companies, Inc.). Private forecasts for 2001-2005 marketing years is an average of the Informa Economics estimate and the average analyst estimate reported by the Dow Jones Newswire survey. The Dow Jones survey average is used for 2006-2016. For wheat, the data from 1983 to 2016 are from Knight-Ridder/Dow Jones.

USDA estimates for corn, soybeans, and all wheat were obtained from historical Prospective Plantings reports.

A positive value of market surprise indicates that the USDA estimate was higher than private expectation. The figure demonstrates that over the last 34 years market surprises were random with 14 positive and 20 negative surprises that altogether averaged to about zero. Even though in the last 5-10 years, there were a few more positive surprises (60%), average surprise was not significantly different from zero. The dotted red line compares the errors of the USDA and private estimates of planting intentions. The errors were calculated relative to the final estimates of planted acreage from January crop production annual summary reports. The positive difference between the size of the private forecast errors and the size of the USDA errors indicates that USDA errors were smaller. Figure 1 demonstrates that USDA had smaller errors in estimating corn planting intentions in 26 out of 34 years included in this analysis and the average size of the USDA errors was significantly smaller as well. This is the main reason for a strong market reaction to the Prospective Plantings reports. 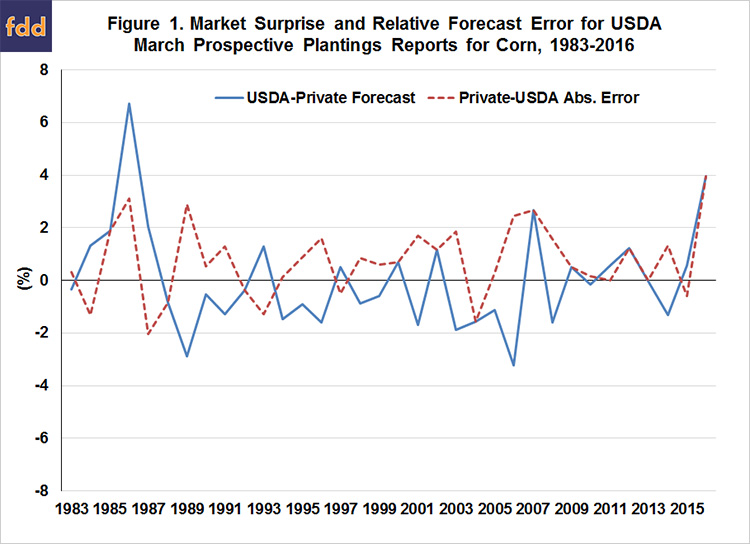 Figure 2 shows that the volatility of the close-to-close returns of the corn December futures contract was 160% higher than normal following the release of the Prospective Plantings reports. Positive surprise (USDA estimate higher than private expectation) caused a slightly less than proportional drop in prices (1% positive surprise resulted in 0.6% negative close-to-close return) and vice versa, on average. Thus, corn December futures returns dropped by 0.61% on the dates with positive Prospective Plantings surprises and increased by 0.38% following negative surprises. However, it is important to keep in mind that Prospective Plantings report is typically released on the same day as the March Grain Stocks report, so the market is reacting to both sources of new information. This resulted in several cases (e.g. 2012) when positive Prospective Plantings surprise was accompanied with positive market return due to the effect of Grain Stocks surprise. Therefore, it is important to take into account both reports when forming price expectations. 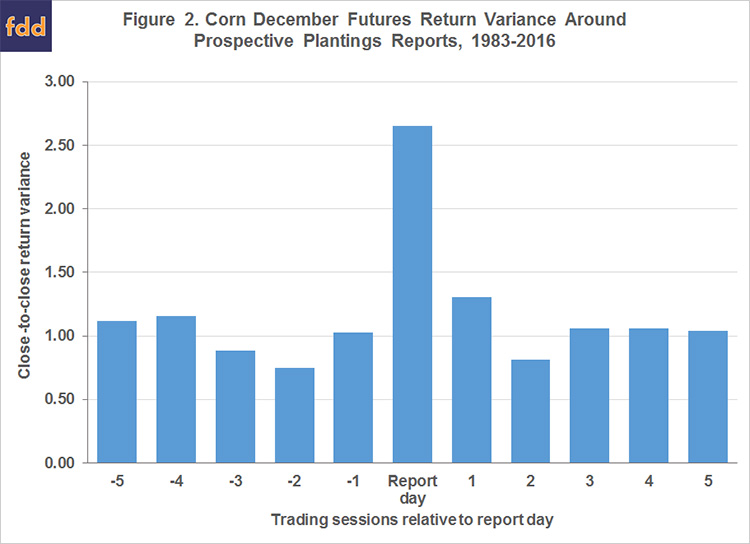 Figure 3 compares USDA and private estimates of planted acreage for soybeans. While surprise was random in corn, there is a stronger tendency for surprise to be negative (USDA estimate lower than private expectation) in soybeans. Thus, surprise was negative in 21 out of 34 years included in this study and in 8 out of 10 most recent years. Nevertheless, the average surprise over these time periods was not significantly different from zero. 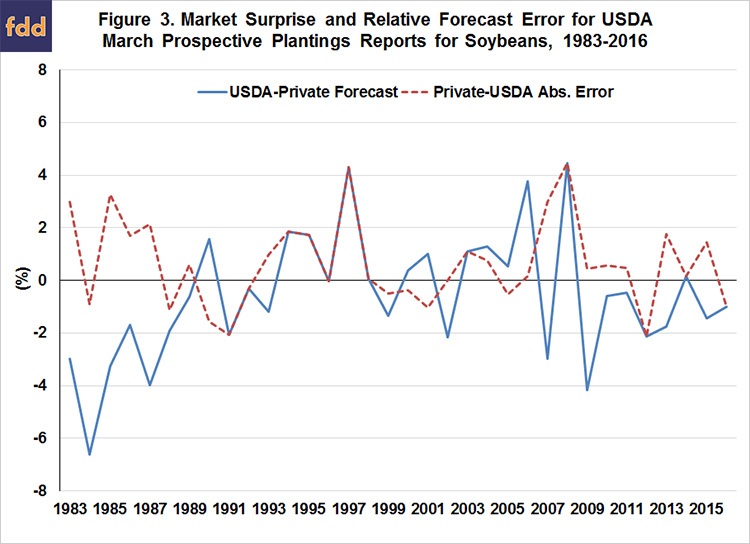 The dotted red line in Figure 3 shows that USDA forecast errors were smaller than private forecast errors in 22 out of 34 years and were significantly smaller on average. Figure 4 shows that the volatility of November soybean futures increased by about 145% on the days of Prospective Plantings report release. Soybean prices dropped by an average of 1.72% in response to positive Prospective Plantings surprises and increased by an average of 0.71% following negative surprises. Soybean price reaction was also slightly less than proportional with returns changing by an average of -0.65% for every percent change in market surprise. 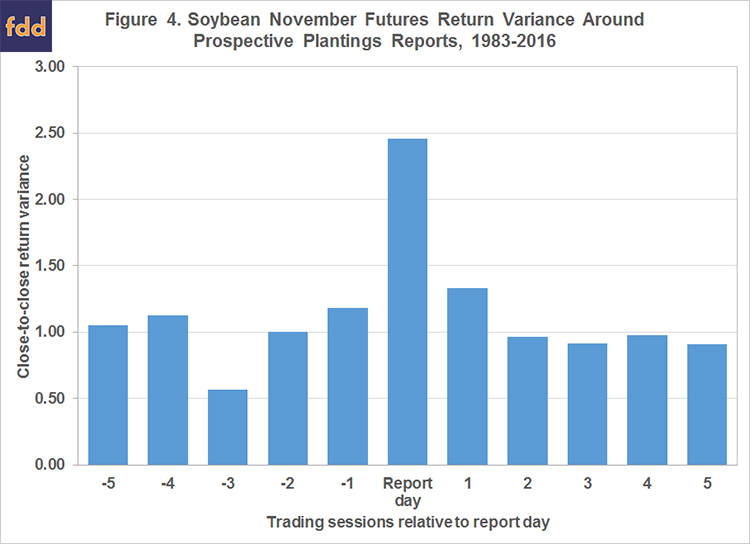 Private expectations for all wheat Prospective Plantings are not available prior to 1999. Figure 5 shows that market surprise over the last 18 years was fairly random with 9 out of 18 years having a negative surprise. That was also true over the last 10 years, but over the last five years there has been a stronger tendency for a negative surprise (4 out of 5 years). The relative track record of USDA wheat Prospective Plantings forecasts is not as impressive as it is for corn and soybeans, with USDA forecast errors being smaller than private forecast errors in 8 out of 18 years and the average difference in the size of errors not significantly different from zero. Nevertheless, the market reaction to these reports was substantial. 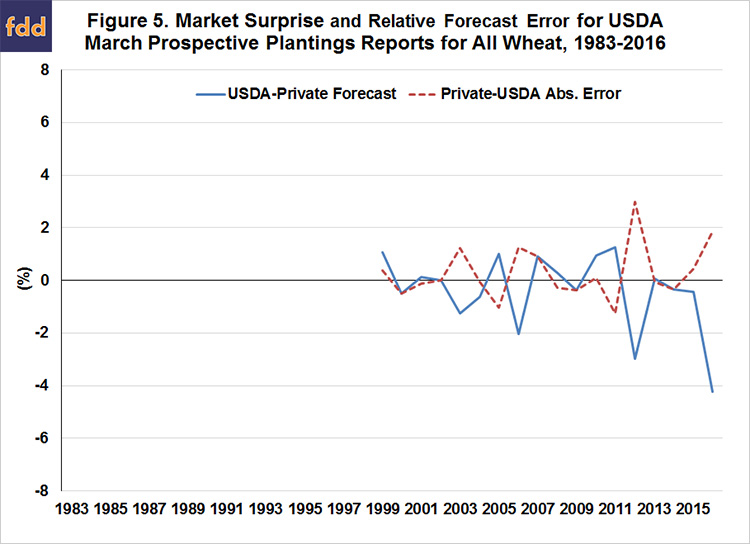 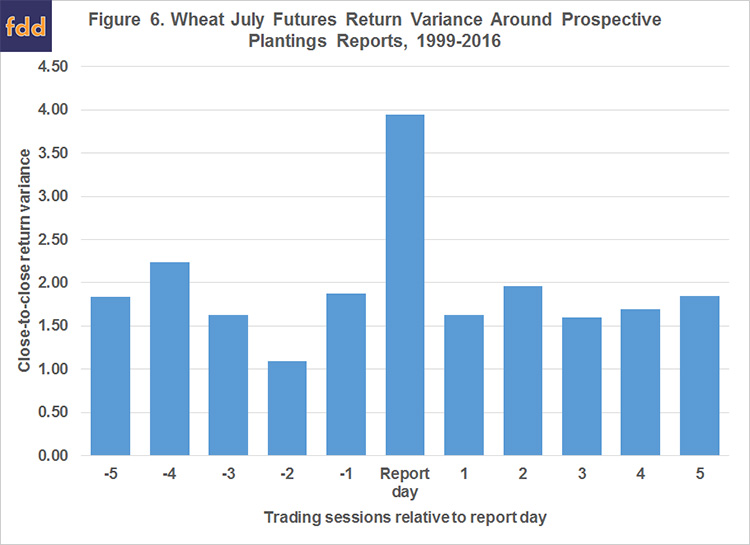 The bottom line is that market surprise (the difference between USDA estimates and private pre-report estimates) tends to be random and difficult to anticipate. USDA estimates are typically more accurate indications of planted acreage than private pre-release estimates. Market volatility roughly doubles on days of Prospective Plantings report releases. However, markets are reacting to both Prospective Plantings and Grain Stocks reports, which are released on the same day, so both should be taken into account when forming price expectations.

Isengildina-Massa, O. "What Do Prospective Plantings Tell Us About Planted Acreage?" farmdoc daily (6):59, Department of Agricultural and Consumer Economics, University of Illinois at Urbana-Champaign, March 25, 2016.