Corn and soybean returns are revisited because of recent changes in soybean prices and the release of USDA reports at the end of March. Overall, soybeans are still projected to be more profitable than corn for 2017 even in the heart of the corn-belt. Given a $3.60 corn price, soybean prices would have to fall below $8.40 per bushel before soybeans and corn have the same profitability. Recent corn and soybean price changes do not cause corn to be more profitable than soybeans. However, price changes do lower expectations for 2017 incomes.

In recent weeks, corn prices have remained relatively stable while soybean prices have fallen. For example, settlement prices for the December 2017 Chicago Mercantile Exchange (CME) corn contract averaged $3.92 during the month of February. On April 4th, the December contract settled at $3.92, the same as the average of the February settlements. The November 2017 CME soybeans contract had an average settlement price of $10.19 during the month of February. On April 3rd, the November contract settled at $9.50, a decrease of 7% from the February average.

Table 1 shows central Illinois budgets for high-productivity farmland with prices at fall delivery bid prices. A $3.60 per bushel price is used for corn and a $9.20 per bushel price is for soybeans. At those prices, operator and land returns are projected at $188 per acre for corn and $238 per acre for soybeans. While soybean prices have decreased from budgets prepared earlier in the year, soybeans still are projected to have a $50 per acre higher return than corn. 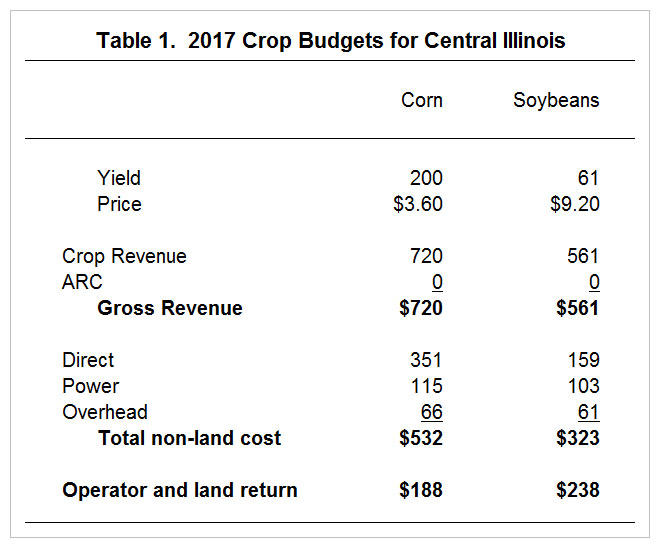 Soybean prices must fall considerably more before corn has the same profitability as soybeans. For the budgets shown in Table 1, soybean prices would have to be $8.38 per bushel before soybeans and corn have the same return at a corn price of $3.60 per bushel. 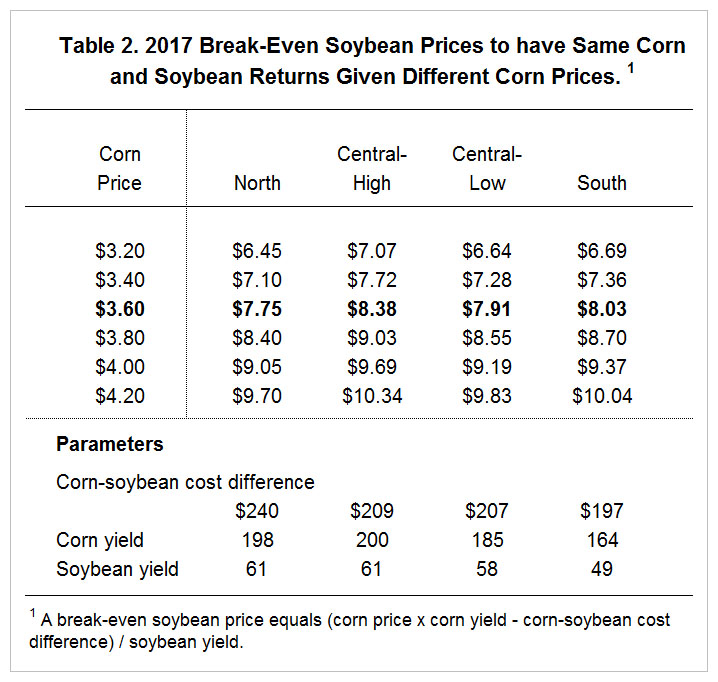 At a $3.60 corn price, all regions have break-even soybean prices at or below $8.38 per bushel, with several of the regions having break-every prices below $8.00. These break-even prices are considerably below the current fall delivery bids which are in the low to mid-$9.00 range

The break-even prices in Table 2 do not consider crop insurance proceeds. Price decreases to mid to low-$8.00 range have the potential to trigger soybean payments for farmers purchasing revenue crop insurance products at an 85% or higher coverage levels. The projected price for soybeans in 2017 is $10.19, with 85% of this projected price being $8.66. Harvest prices below $8.66 will trigger insurance payments if yields do not increase above guaranteed levels. As a result of crop insurance, there is a good chance that soybeans will be more profitable than corn in 2017 because price declines to cause equal corn and soybean returns will trigger crop insurance payments.

The National Agricultural Statistical Service (NASS) recently released the 2017 Prospective Plantings report. In the United States, a 4 million acre shift away from corn and a 6 million acre shift to soybeans are projected for 2017.

Recent price movements have not changed relatively profitability between soybeans and corn (see farmdoc daily, December 6, 2017). Relative price changes, however, have lowered profitability projections for 2017. Supply and demand analysis in a recent farmdoc webinar suggest prices of $3.60 for corn and $8.95 for soybeans. These prices would result in low levels of 2017 income. Of course, income projections can and will change as we progress through the growing season.

Schnitkey, G. "Break-Even Levels for Corn and Soybeans to Have the Same Profitability." farmdoc daily (6):169, Department of Agricultural and Consumer Economics, University of Illinois at Urbana-Champaign, September 7, 2016.