A recent farm bill hearing before the House Ag Committee included concerns about how cotton farmers were treated by the 2014 Farm Bill (see, Farm Policy News, April 6, 2017). Comments indicated a concern that cotton farmers were lacking assistance. To better understand the situation this article looks into the generic base acres created by the 2014 Farm Bill.

Congress removed cotton from ARC and PLC in the 2014 Farm Bill. This was done because the U.S. had suffered a substantial loss to Brazil in a dispute before the World Trade Organization over cotton assistance. Removing cotton was necessary to settling that dispute and to avoid retaliation from Brazil on U.S. exports. In place of ARC or PLC, cotton farmers were provided a supplemental crop insurance policy that they could purchase with an 80% subsidy level on the premium. Called STAX, this policy permitted cotton farmers to add area-wide insurance coverage on top of individual policies (see, farmdoc daily, June 30, 2016). Cotton also remained a loan eligible commodity in the Marketing Loan Assistance (MAL) program. 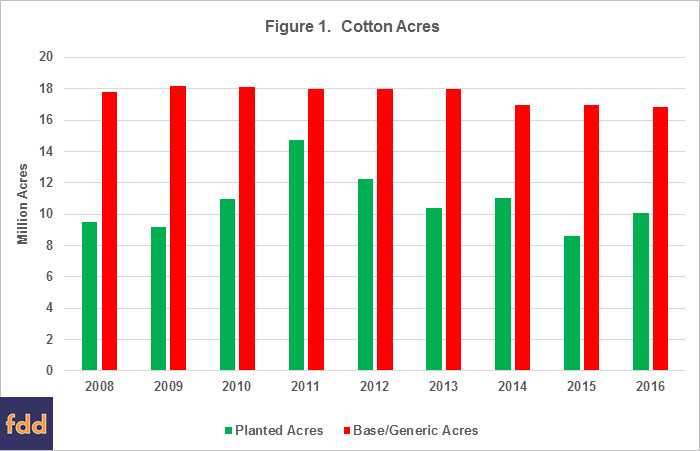 Generic Base Acres and Planting Attributed to Them 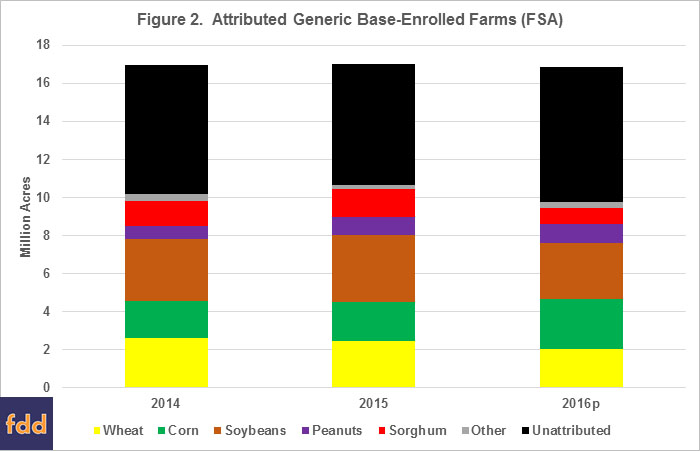 The generic base acres attributed to covered commodities have the potential to receive payments under the ARC and PLC programs, but actual payments depend on revenue or price triggers (respectively) for the programs and covered commodities. Previously, we discussed total ARC-CO and PLC payments per base acre in the 2014 and 2015 crop years and compared payments across crops (see, farmdoc daily, March 9, 2017). This provides an indication of the relative value of the decision to plant generic base acres to covered commodities. For example, peanut base received $288.77 per acre compared to wheat at $23.22 per acre and this expected payment may factor in to farmer planting decisions. This goes to the issue of the recoupled nature of generic base acres and will be explored in a future article. 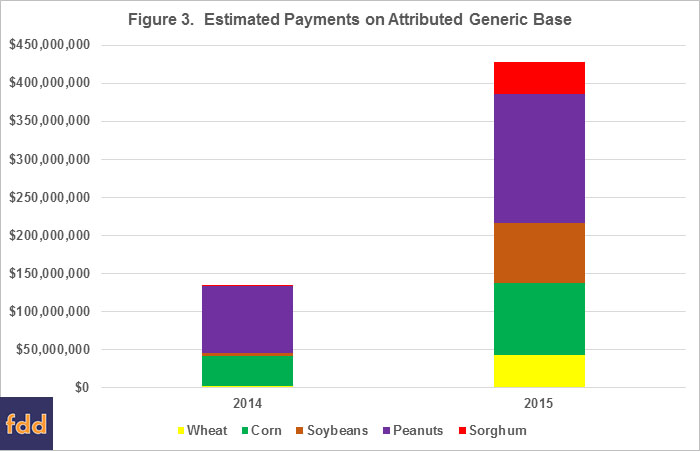 The payments illustrated in Figure 3 are just those payments made on generic base acres planted to covered commodities not the total assistance available to cotton farmers from the 2014 Farm Bill. For example, cotton farmers also received two years of Cotton Transition Assistance Payments totaling $487 million for fiscal years 2015 and 2016. In terms of total program benefits, upland cotton received $1.309 billion in Federal outlays in fiscal year 2015 and $781 million in fiscal year 2016 outlays. These outlays do not include ARC or PLC payments on attributed generic base acres discussed above. Those payments for the 2014 crop year correspond with Federal outlays in fiscal year 2016 because programs use marketing year averages and are to be made after October 1; adding them brings the total to about $930 million.

Contrary to the concerns raised at the recent House Agriculture Committee farm bill hearing, cotton farmers were not completely left out of the 2014 Farm Bill. Cotton farmers could receive four types of Federal assistance. First, a farmer planting cotton could purchase crop insurance, including the highly subsidized STAX program only available for cotton. Second, cotton remains eligible to use the marketing assistance loan program, including loan gains or Loan Deficiency Payments as a backstop to low prices. Third, farmers with former cotton base received two years of transition assistance payments. Fourth, if the farmer has generic base acres and planted the acres to a covered commodity, the farmer could potentially receive ARC or PLC payments on those attributed generic base acres. Estimates of payments on attributed generic base combined with Federal outlay data demonstrate that cotton producers and farmers with generic base acres have received substantial assistance from the 2014 Farm Bill.

Paulson, N., and G. Schnitkey. "Use of the SCO and STAX Insurance Programs in 2015." farmdoc daily (6):123, Department of Agricultural and Consumer Economics, University of Illinois at Urbana-Champaign, June 30, 2016.