The pace of D3 RIN generation increased consistently throughout 2016, with a total of 192 million D3 RINs generated during the year. Non-compliance retirements currently reported total 2.1 million RINs. This puts net generation at roughly 190 million for 2016, or 40 million short of the 230 million RIN mandate for cellulosic. 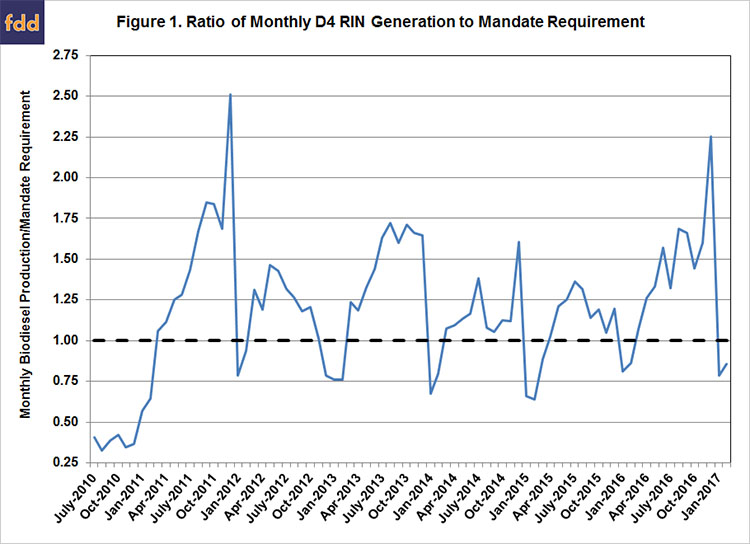 Non-compliance retirements of 2016 D4 RINs are currently at 67.1 million. The EIA reports a total of 88 million gallons or 132 million RINs worth of biodiesel exports. This results in net generation of 3.809 billion RINs or 959 million more than the 2.85 billion RIN (1.9 billion volumetric) mandate for 2016.

Note that this advanced gap can be filled with any advanced RIN category (D3, D4, or D5). Combining D4 and D5 generation data results in total non-cellulosic advanced RINs generated in 2016 of more than 3.9 billion, providing more than enough for compliance with the non-cellulosic mandate target of 3.38 billion. 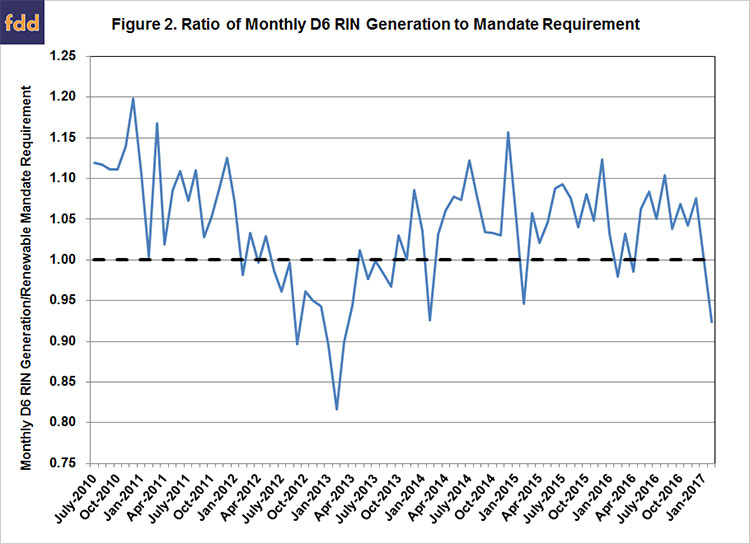 Table 1 summarizes gross RIN generation, exports, and non-compliance retirement exports across all D-code categories for 2016. These values are then used to provide estimates of net RIN generation available for 2016 mandate compliance, and potential RIN stock changes relative to the 2016 mandate levels outlined in EPA’s final rulemaking. 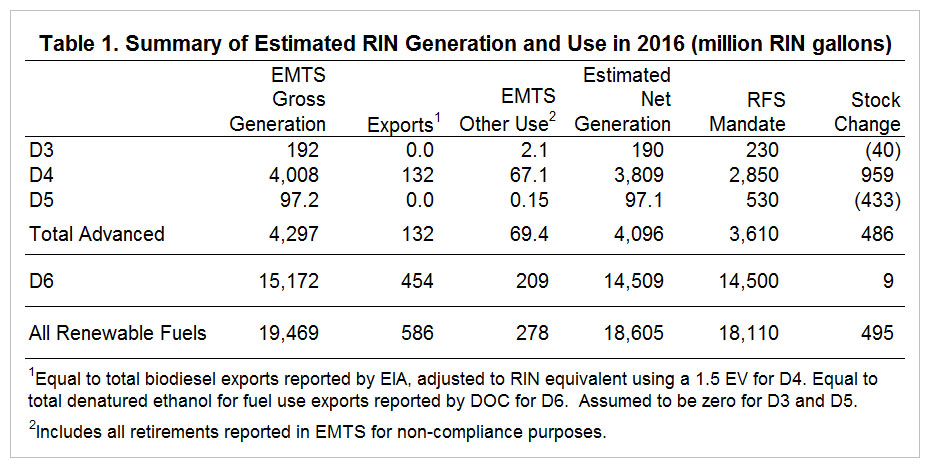 Previous quarterly updates for 2016 showed that generation levels early in the year suggested potential deficits of RINs eligible for use towards the 2016 mandate targets. Consistent with improved profitability for both ethanol and biodiesel production (farmdoc daily, February 1, 2017; March 1, 2017), RIN generation tended to increase throughout the year for all fuel categories resulting in what look to be sufficient amounts to cover compliance for the non-cellulosic advanced and renewable portions of the overall mandate. Using mandate levels from the final rulemaking for 2016 suggests that RIN stocks may increase by close to 500 million RINs, nearly all of which would be advanced D4 RINs which could be applied towards the non-cellulosic advanced or renewable mandate components in future compliance periods.

However, as noted in the third quarter RIN update for 2016, fuel consumption in the US has been surpassing the EPA estimates upon which the percentage-based renewable volume obligations (RVO) applied to obligated parties were based. This will tend to increase the actual mandate volumes above the targets outlined in the rulemaking (farmdoc daily, June 2, 2016; June 10, 2016). Thus, while net RIN generation estimates for 2016 suggest that obligated parties will be able to comply with targeted mandate levels while building RIN stocks, deviations in domestic fuel use from EIA projections will change the amount of RINs ultimately needed for compliance. The EMTS system now includes data on annual compliance through 2015, and a future daily post will use this data to revisit the RIN stock issue to adjust for actual fuel usage and its impact on compliance implementation.