These figures were obtained from farm business records kept by farmers enrolled in the Illinois Farm Business Farm Management Association. The samples included only farms with more than 500 acres of productive and nearly level soils in each area of the state; these are farms without livestock. Farms located in the 22 counties north and northwest of the Illinois River are included in the sample for northern Illinois. Farms from 36 counties below a line from about Mattoon to Alton are in the sample for southern Illinois. The remaining 44 counties make up the sample for central Illinois. The sample farms averaged 1,470 tillable acres in northern Illinois, 1,359 acres in the central section with high soil ratings, 1,379 acres in the central section with lower soil ratings, and 1,664 acres in southern Illinois.

Cost of Production for Corn Compared to 2015

Costs per acre were mostly lower in all the different geographic regions in Illinois compared to 2015. Across the state, total costs per acre to produce corn decreased 3 to 6 percent. Many costs decreased, including fertility, seed and land costs.

Cost of Production for Soybeans Compared to 2015

Total costs to produce corn for all combined areas of the state were $859 per acre. This figure decreased four percent compared to the year before. Variable costs decreased $24 per acre or 6 percent, other nonland costs decreased $8 per acre and land costs decreased $3 per acre. In 2016, cash costs accounted for 47 percent of the total cost of production for corn, other nonland costs were 28 percent, and land costs were 25 percent. The average corn yield for all combined areas of the state was 215 bushels per acre resulting in a total cost of production of $3.99 per bushel. The average corn yield was the highest on record. Total costs per acre were the lowest in the last five years while total costs per bushel were the lowest in the last eight years.

Total cost per acre to produce soybeans decreased, from $652 per acre in 2015 to $633 per acre in 2016. Generally speaking, the same expenses that decreased for corn also decreased for soybeans. Variable costs accounted for 33 percent of the total cost of production for soybeans, other nonland costs 33 percent and land costs 34 percent. The average soybean yield for all combined areas of the state was 65 bushels per acre resulting in a total cost of production of $9.71 per bushel. The average soybean yield was the highest on record. The cost per bushel to raise soybeans the last five years averaged $11.25 per bushel.

Forecasts for Illinois production costs in 2017 look to be less while 2018 sees a slight increase using Gary Schnitkey’s 2017 crop budgets and the USDA’s Cost-of-Production Forecasts as a guide. For corn, 2017 variable costs are projected to decrease 5 percent, mainly due to soil fertility costs. For 2018, the variable costs are expected to increase 2 percent from 2017. For 2017, soybeans have a larger projected decrease of variable costs of 8 percent. This decrease is also primarily due to soil fertility costs. In 2018, the soybean variable costs are expected to be 2 percent more than 2017. With tightening margins, these decreases are needed. However, additional cutting of overhead and land costs will need to occur to make returns more profitable in 2017 and 2018.

A more complete discussion of how some of the costs are calculated can be found under Illinois Farm Management Handbook in the management section of farmdoc. 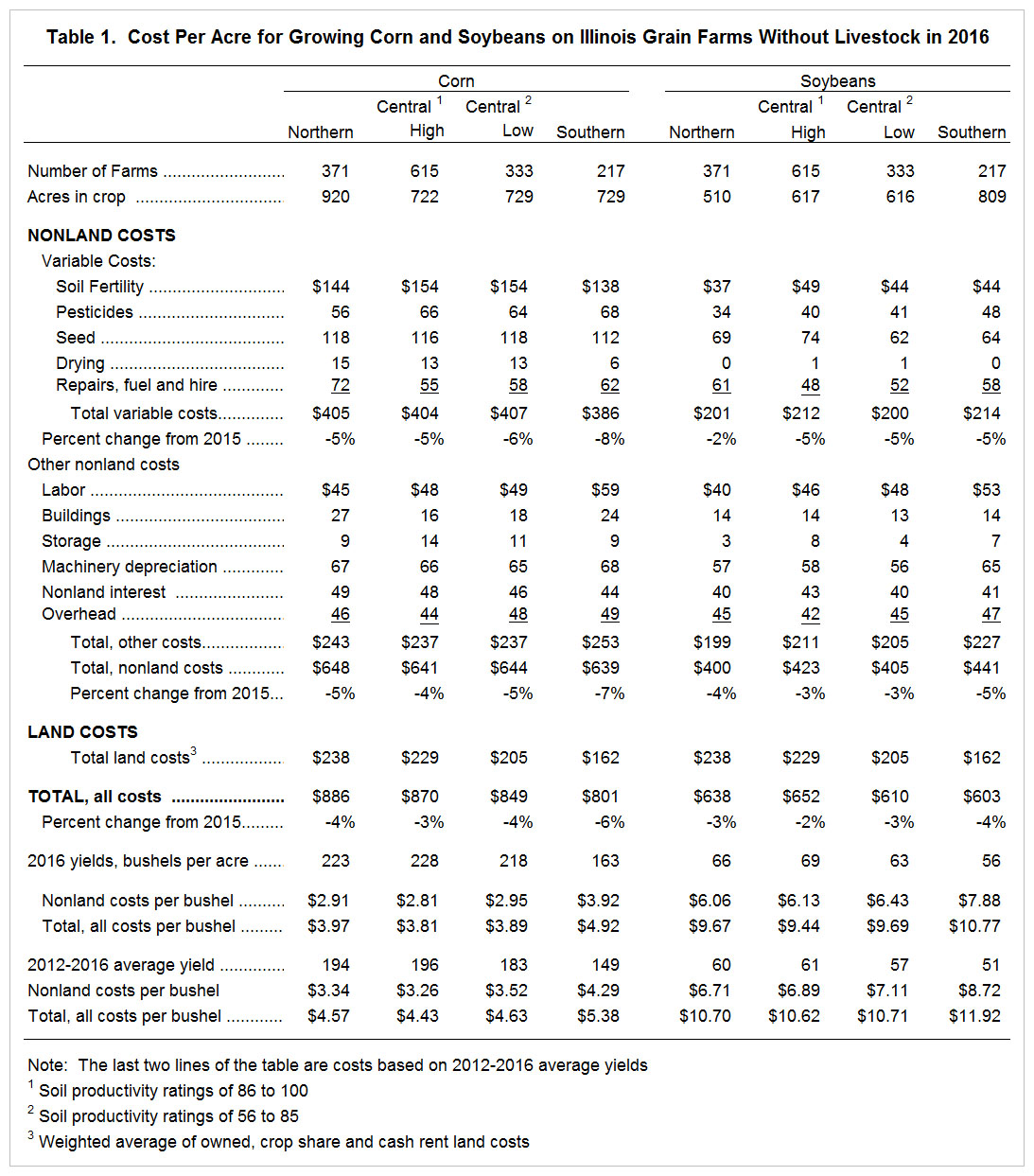