Congress continues work on the next farm bill and the House Ag Committee recently reviewed conservation programs (see e.g., Farm Policy News, March 5, 2017). A central topic of that hearing, as well as the ongoing discussion about conservation policy, is the Conservation Reserve Program (CRP). This article provides some historical background for the CRP.

Similar to the commodity support programs, the suite of current conservation programs in the farm bill have their roots in the New Deal. They began with legislation passed by Congress in 1935 and 1936 that was designed in part to help address massive soil erosion and the Dust Bowl. Its early iterations were largely subordinate to price support goals, however, used to pay farmers to temporarily hold land out of production in hopes of controlling supplies, increasing prices and conserving soil resources. For example, in the 1936 Act Congress declared the policy to include preservation of soil resources and the reestablishment of farmer purchasing power (Soil Conservation and Domestic Allotment Act of 1936, P.L. 74-461).

Conservation efforts faded during World War II as the war effort prioritized production, but returned in the post-war years. In fact, today’s CRP is a direct descendant of the Soil Bank created by Congress and the Eisenhower Administration in 1956; designed to address surplus production with short and long-term acreage retirement programs. In 1956, Congress declared that “the production of excessive supplies of agricultural commodities depresses prices and income of farm families; constitutes improper land use and brings about soil erosion, depletion of soil fertility, and too rapid release of water from lands where it falls” (Agricultural Act of 1956, P.L. 84-540).

Conservation efforts again took a backseat during the production expansion cycle of the 1970s. Expanded production led to the Eighties farm crisis but also recycled soil erosion and other environmental concerns. This time the issues collided with an environmental coalition empowered by legislative and political victories in the Seventies. Pressure to address erosion was building. A 1983 report by the Comptroller General had concluded that Federal soil conservation programs were inadequate and not meeting potential and a 1985 USDA report raised concerns about farming on highly erodible land and a need for better conservation policy to address erosion. In response, Congress included landmark conservation policies in the Food Security Act of 1985; the modern CRP focused on long-term retirement from production of environmentally sensitive and highly erodible lands; conservation compliance requirements for farm program eligibility. The 1985 Farm Bill marks the beginning of modern conservation policy designed predominantly to address conservation challenges.

Figure 1 provides an illustration of acres under CRP from the Soil Bank through the current acreage caps in the 2014 Farm Bill, along with the acres planted to the major commodities according to USDA-NASS data (Soil Bank acres, Cochrane and Ryan 1976; CRP data, Farm Service Agency). 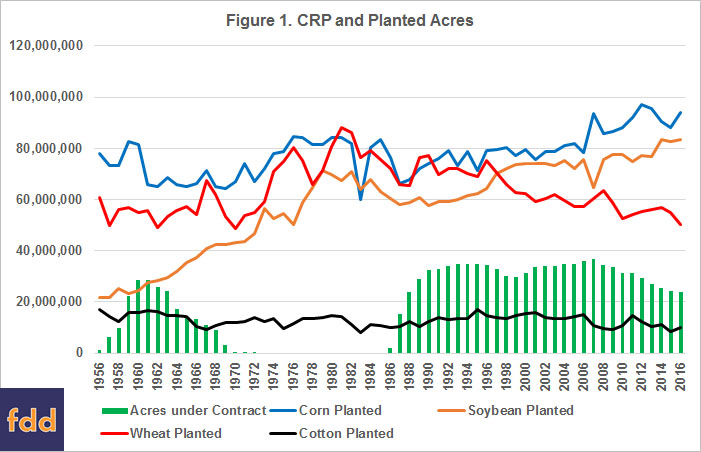 The modern version of CRP combines cropland acreage reductions with an explicit focus that environmentally-sensitive and highly erodible lands should be retired from production. Specifically, CRP uses long-term contracts with landowners to help them “conserve and improve the soil, water and wildlife resources” of environmentally sensitive lands with a cropping history (16 U.S.C. § 3831, 7 CFR 1410.3(c)).

Congress has reauthorized CRP in each farm bill since 1985 and has expanded the program’s purposes. More notable is the fact that Congress has increased or decreased the program’s acreage cap in subsequent bills, coinciding with low or high crop prices (respectively). To illustrate this interaction between CRP and crop prices, Figure 2 compares the CRP acreage cap, acres under contract and marketing year average prices for wheat and corn since the program was recreated in 1985. 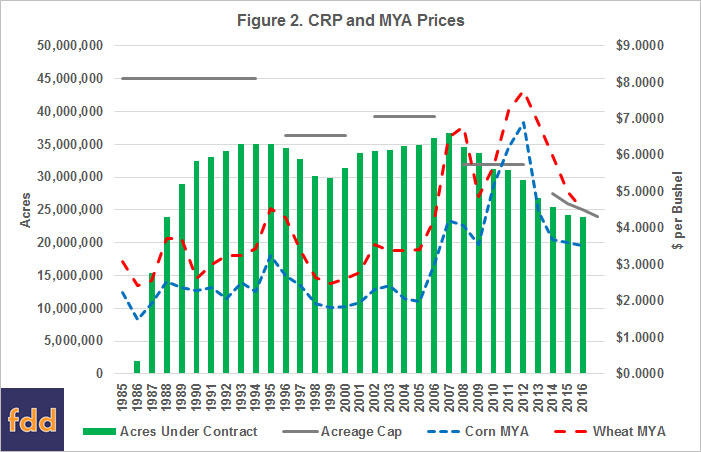 This back-and-forth over acres reflects some of the policy issues for CRP. Since the 1985 Farm Bill recreated the program, strong crop prices have resulted in pressure to reduce CRP acres and the acreage cap. High prices are generally followed by relatively weaker prices. When prices are relatively weak they create pressure to retire acres in the CRP and on Congress to increase the acreage cap. Logically, if prices are low CRP might provide a better return on some lands through the Federal rental payments but it can be difficult to compete with production returns when prices are high. CRP contracts, however, are long-term (10 or 15 years) but prices and production returns operate on much shorter time horizons. Finally, crop prices and production returns are also not the measure of programs designed to protect and conserve natural resources such as soil, water and habitat. These are just some of the issues to be explored further as Congress works to reauthorize farm bill programs.

Coppess, Jonathan. The Fault Lines of Farm Policy, forthcoming (U. of Nebraska Press 2018).