download PDF
May 26, 2017
farmdoc daily (7):98
Recommended citation format: Schnitkey, G., N. Paulson and D. Lattz. "How Hard is it to be Above Average in Farming?" farmdoc daily (7):98, Department of Agricultural and Consumer Economics, University of Illinois at Urbana-Champaign, May 26, 2017. Permalink

Returns to farms vary from one year to next due to variation in prices, yields, and costs. Within a year, some farms will have higher returns than others. Over time, there are some farms that tend to persist in having high returns. Over time, the returns of these more profitable farms tend to average $20 and $30 per acre higher than the average of all farms.

Data from Illinois Farm Business Farm Management (FBFM) was used to evaluate returns for a restricted set of farms. These farms had to be:

Focus was given to grain operations to assure that difference in farm types was not causing relative return differences. This does not imply that livestock and other enterprise are unimportant. Rather, focus was given to management of grain farms and not to farm type.

Similar analyses were conducted in other areas of the state. Results are similar to those presented here.

Per acre operator and land returns is the measure of return. Operator and land return equals gross revenue minus non-land costs and is the return before paying for farmland. Farm returns will vary based on whether farmland is owned, share rented, or cash rented. We are not ranking farms based on land control, rather on the ability to generate returns from farmland. 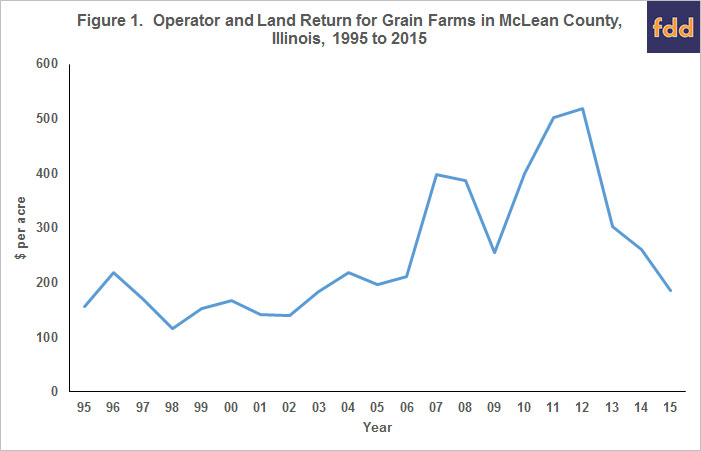 Correlation between Rank of Operator and Land Return

In each year, farms were ranked from highest to lowest based on per acre operator and land return. Correlations were then calculated between yearly ranks.

The correlation coefficient between adjacent year’s ranks was .40. Correlation coefficients for returns typically range from 1.0 to 0.0. A correlation coefficient of 1.0 would indicate the rank stayed the same across years. That is a farm ranked first in 2014 would be first in 2015, the farm ranked second in 2014 would be second in 2015, and so on. A value of zero would indicate there is no relationship between a farm’s rank in one year and that rank in the next year. The .40 is between zero and one. There is persistency in ranks across years, but there are other factors impacting ranks.

Those other factors likely are relative prices, yields, and costs. In any given year, a farm’s rank is heavily influenced by yields and prices received for crops. In any given year, a farm may have had an exceptionally high yield or price. However, high relative yields and prices may not be maintained over time. The importance of these random factors will be reduced if more years are averaged together.

Correlation coefficients based on comparing returns averaged over two, three, four, and five years are:

Note that the correlation coefficients go up, particularly as the averaging period increases from one to three years.

Difference in Returns over Time 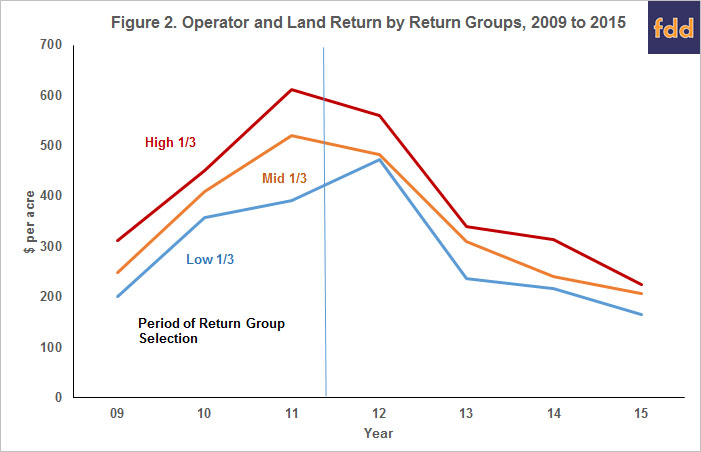 The above process was repeated for other time periods from 1995 to 2014. Over time, farms do have differences in returns which persist. Four years after forming the returns group, the high one-third farms have $20 to $30 per acre higher returns than the average.

There are farms that tend to be more profitable than other farms over time. Future articles will evaluate those factors that cause farms to stay in the high and low profitability groups.

Data used in this study comes from the local Farm Business Farm Management (FBFM) Associations across the State of Illinois. Without their cooperation, information as comprehensive and accurate as this would not be available for educational purposes. FBFM, which consists of 5,700 plus farmers and 60 professional field staff, is a not-for-profit organization available to all farm operators in Illinois. FBFM staff provide counsel along with recordkeeping, farm financial management, business entity planning and income tax management. For more information, please contact the State FBFM Office located at the University of Illinois Department of Agricultural and Consumer Economics at 217.333.5511 or visit the FBFM website at www.fbfm.org.