In recent weeks, soybean prices have decreased, causing prospects for 2017 net incomes to decrease as well. At current fall-time delivery prices and trend yields, 2017 net incomes on grain farms would be near $25,000 per farm, a level that would result in some financial deterioration on many farms. At this point, though, there is considerable uncertainty about 2017 incomes as 2017 yields are not known. More accurate 2017 net income projections will be able to be made when 2017 yields and prices come into clearer focus, likely in late July and early August.

Table 1 shows per acre returns and costs for central Illinois farms having high-productivity farmland. The 2015 and 2016 are actual results summarized from farms enrolled in Illinois Farm Business Farm Management (FBFM). Projections are given for 2017. Projections come from the February edition of 2017 Illinois Crop Budgets, with modifications made to prices and costs to reflect more up-to-date information. 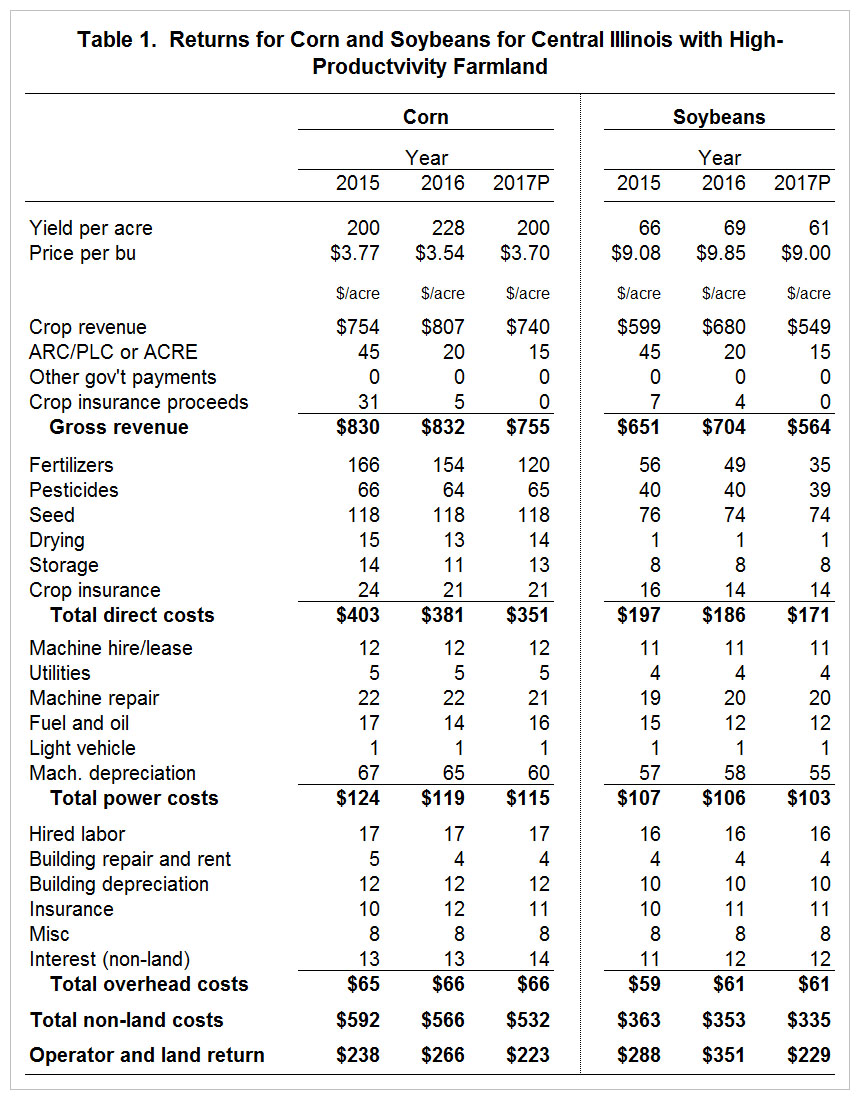 Yields for 2017 projections are 200 bushels per acre for corn and 61 bushels per acre for soybeans. These projected yields are at trend levels. Projected yields have not been changed because growing conditions to date do not provide enough information to warrant changing yields. Obviously, actual yields can vary from the trend yields. Actual yields will come into clearer focus in late July for corn and August for soybeans (see farmdoc daily, May 24, 2017).

A $3.70 per bushel price is used for corn in 2017 projections. Prices on futures contracts for corn have not varied much since winter. Hence, the price used to make the 2017 projection is not different from that in the 2017 Illinois Crop Budgets.

On the other hand, soybean prices have fallen considerably in recent months. The price of the November 2017 soybean contract was above $10.00 per bushel for much of January, February, and March. From mid-March through mid-May, November 2017 prices varied in a range from $9.50 to $9.70. At the end of May, prices on the November contract have fallen below $9.30, closing at $9.20 per bushel on May 30.

Current fall delivery bids in central Illinois are below $9.00. A $9.00 per bushel price is used for 2017 projections (see Table 1), down from a $9.70 per bushel price used in the February edition of the 2017 Illinois Crop Budgets.

A decline in soybean prices to $9.00 likely will trigger 2017 ARC-CO payments, given that county soybean yields are at trend levels. As a result, 2017 projections build in a $15 per acre payment for 2017 ARC-CO payments. These 2017 ARC-CO payments will be received in the fall of 2018. This fall, some farmers will receive 2016 ARC-CO payments estimated at $20 per acre. This amount will vary depending on the administrative county of the farm, with county estimates provided in a farmdoc daily article issued on February 24, 2017.

Soybean non-land costs are projected at $335 per acre in 2017, down by $18 per acre from a $353 in 2016. Similar to corn, the largest factor contributing to the non-land cost decrease is a decrease in fertilizer costs.

Assuming that a farm has 50% of their acres in corn and 50% in soybeans, operator and land returns for the last three years are:

Cash rents have declined slightly in recent years. Cash rent for central Illinois high-productivity farmland averaged near $278 per acre in 2015. For 2016, average cash rent declined by $5 per acre to $273 per acre. Projections are for a continued decrease into 2017 of $270 per acre.

Current projections place 2017 incomes near $25,000 per farm. This estimate is made for Illinois grain farms enrolled in FBFM (see farmdoc daily, February 14, 2017). These farms are located throughout Illinois and range in size. Average size is near 1,500 acres. A $25,000 income level would result in a deteriorating financial position on many Illinois farms. Income prospects have declined from earlier forecasts due to a decrease in soybean price.

The risks of substantial soybean price decreases have been anticipated earlier in the year (farmdoc daily, January 23, 2017). If a farmer priced a portion of their soybean production at higher prices available this winter, 2017 income projections would not have declined as much as suggested here.

Incomes for 2017 are still far from certain. At this point, little can be said about 2017 yields, and prices will vary depending on yield prospects. Demand factors also will influence prices. With this important caveat, incomes for 2017 took a decidedly more negative prospect with recent decreases in soybean prices. In my opinion, significant rebounds in soybean prices are not likely unless 2017 yields turn out to be below trend.

More accurate income forecasts will be available in August after 2017 yields come into clearer focus.

Hubbs, T. "Weekly Outlook: Is it Time to Sell Some 2017 Soybeans?" farmdoc daily (7):11, Department of Agricultural and Consumer Economics, University of Illinois at Urbana-Champaign, January 23, 2017.