Machinery cost estimates for various field operations and machines have been updated for 2017. The last time machinery costs were released on farmdoc was in 2015. Between 2015 and 2017, most per acre costs increased; however, some machinery costs decreased due to a lower diesel fuel price in 2017.

Estimated Machinery costs often are used to set custom rates when one individual performs a field operation for another individual. Only costs are included in estimates. An additional amount should be added for profit. Machinery costs estimates are available in the management section of farmdoc in five publications:

Costs are estimated in both 2015 and 2017 using an estimation approach that relies on formulas developed by the American Society of Agricultural Engineers (ASAE). From 2015 to 2017, most of the estimated machinery costs went up. However, some costs decreased.

Factors impacting costs will be illustrated for a 310 PTO horsepower tractor with front wheel assist. These costs are shown in the Machinery Costs Estimates: Tractors publication. Total costs were estimated at $165.70 per hour in 2015. Per hour decreased by $1.40 per hour to $164.30 per hour in 2017 (see Table 1).

Per hour costs are divided into overhead, fuel, and labor categories. Overhead includes depreciation, interest, insurance and housing, and repairs. Formulas are used to estimate each cost, and the purchase price enters into those formulas. The purchase price is assumed to equal 85% of the list price of the tractor. List prices were $364,435 in 2015 and $381,429 in 2017. Between 2015 and 2017, the list price increased. As a result, overhead costs increased from $105.90 in 2015 to $110.90 in 2017 (see Table 1), roughly the same percentage increase as the increase in list prices. More detail on the approaches used to estimate overhead costs are given in the Machinery Cost Estimates: Tractors publication. 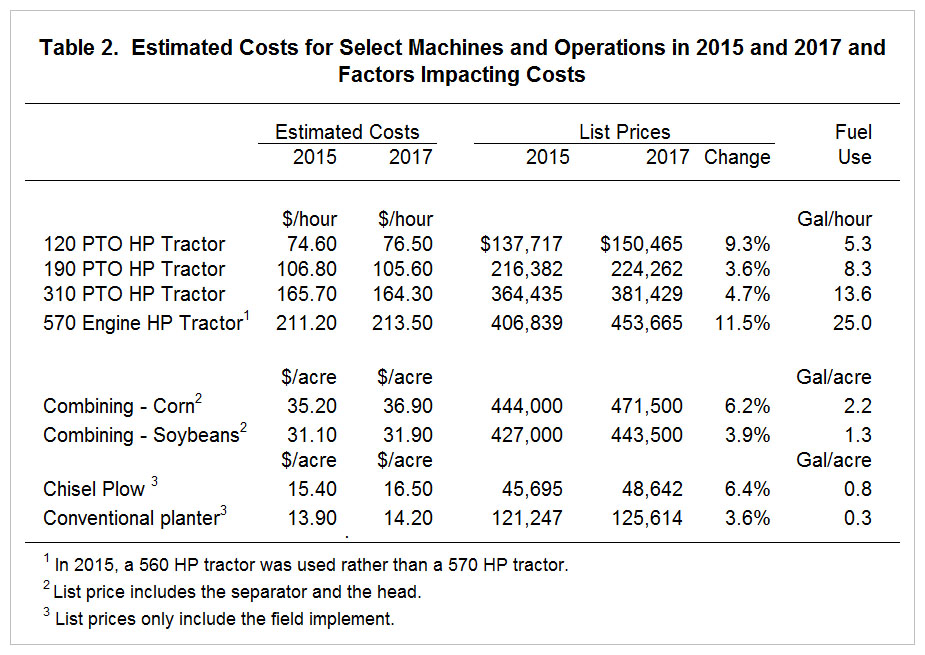 Factors Impacting Per Hour and Per Acre Costs

Per acre cost estimates are made based on assumptions concerning prices, interest rates, and use. In calculating costs, for example, 300 hours of use were assumed for tractors. Use has a large impact on per hour costs. Higher hours of use will lower per hour costs as depreciation and interest costs are spread over more hours. Similarly, more acres of use will generally reduce per acre costs of a field implement.

Machinery cost estimates for 2017 have been released. Costs for most operations are higher in 2017 than in 2015; however, some costs did decrease. Most machines and operations had lower fuel costs while overhead and labor costs increased. These cost estimates often are used to set custom machinery rates between individuals. The next time machinery costs are scheduled to be updated is in 2019.