Capital purchases include investments in machinery, farm buildings, grain bins, drainage tile, and other longer-lived assets. On most grain farms, machinery purchases make up most of the capital purchases. 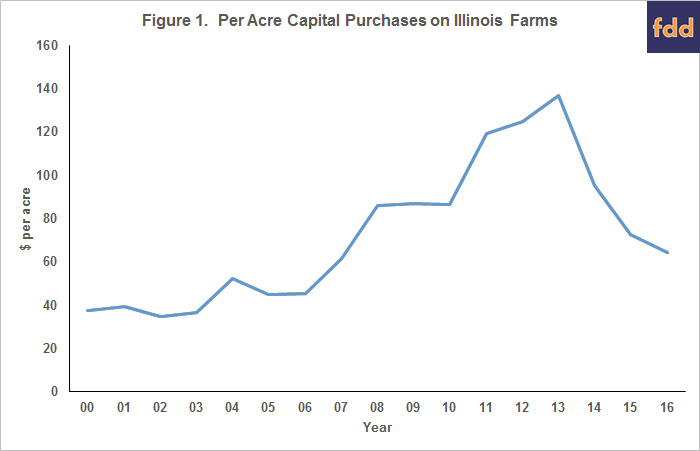 These increases in capital purchases corresponded to increasing net incomes caused by higher commodity prices. There is a positive correlation, though lagged, between net income and capital purchases, as is illustrated in Figure 2. 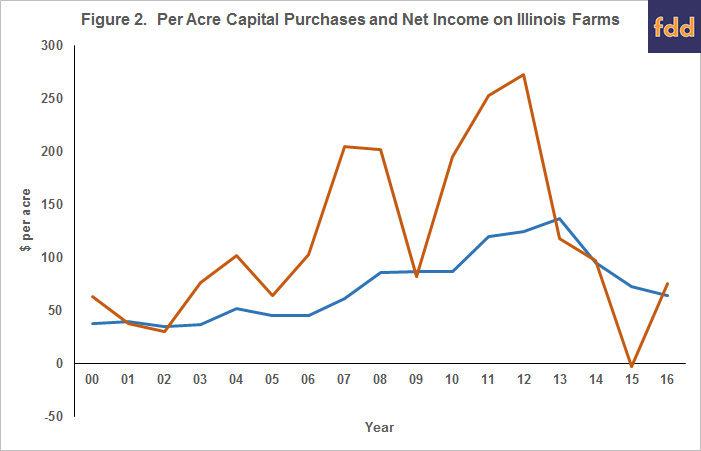 Is $64 Per Tillable Acre Low Enough?

Now the following question exists: Is the average $64 per acre of capital purchases in 2016 low enough or does it need to decline more in future years? On the side of further reductions is the high levels of capital expenditures from 2011 to 2013. These higher levels likely built asset bases above those needed for normal operations. If a “draw down” period occurs, the question still is what is the long-run, sustainable level of capital purchases on farms.

However, the new level of sustainable capital purchases likely is above $42 per acre because machinery prices have increased. For example, a 255 horsepower tractor in 2006 had a list price of $216,000. A similar tractor in 2017 has a list price of $340,000. The increase in the tractor list price was an average of 4% per year over the eleven-year period from 2006 to 2017. Similarly, the list price of a combine capable of handling an 8-row corn head was $241,000 in 2006. The list price of a similar combine in 2017 is $398,000. The increase in the combine’s list price was 5% on a yearly basis. In the intervening years, technological change causes the 2017 machines to be better than the 2006 machines. Still, farmers must still cover the additional costs of the new machines.

In my opinion, the necessity of matching lower revenue with expenditures will require farms to further reduce capital purchases from the $66 per acre average level in 2016. Setting a goal for the low to mid $50 per tillable acre seems reasonable. Given machinery price increases, lower capital purchases mean holding a different machinery complement in 2016 as compared to that in 2006. Lowering capital expenditures can occur through a combination of using the same machinery complement over more acres and reducing the amount of machines. Machine reduction could occur through less tillage.

Importance of Machinery-Related Decisions and Strategies

Decisions related to capital purchases have large impacts on a farm’s profitability. In a farmdoc daily article on June 16, 2017, FBFM staff show that profitability increases as machinery-related costs decrease. This finding is the standard. In a similar study, for example, machinery costs were lower by $18 per acre on the farms with the highest one-third of returns compared to the average return levels (farmdoc daily, June 6, 2017).

Strategies for lowering machine costs are not new and likely revolve around:

Implementing any of the above strategies is not easy.

Krapf, B., D. Raab, and B. Zwilling. "What is the Impact of Power and Equipment Costs on Illinois Grain Farms?" farmdoc daily (7):112, Department of Agricultural and Consumer Economics, University of Illinois at Urbana-Champaign, June 16, 2017.