As we have reached the middle of 2017, farmers and others may be updating income and cash flow forecasts for 2017. Since the beginning of the year, many have been using a 2017 corn price forecast of below $4.00. For example, a $3.70 corn price has been used in 2017 Illinois Crop Budgets. Events throughout this year have not changed this corn forecast much at all. Using a 2017 corn price in the mid $3.00 range seems prudent for 2017. In this article, market year average (MYA) price forecasts are examined.

The MYA price for corn is computed by the National Agricultural Statistical Service (NASS). It is a national price and is used in calculating Agricultural Risk Coverage (ARC) and Price Loss Coverage (PLC) payments.

Throughout the marketing year, possible ranges of MYA prices for the ongoing marketing year are released monthly by the Office of Chief Economist, United States Department of Agriculture in the World Agricultural Supply and Demand Estimates (WASDE) report. In the June report, MYA prices for the 2016/17 marketing year were estimated to fall in the range from $3.25 to $3.45 per bushel. The midpoint of that WASDE range often is reported as a price forecast. The midpoint of the $3.25 to $3.45 range has a midpoint of $3.35 per bushel. 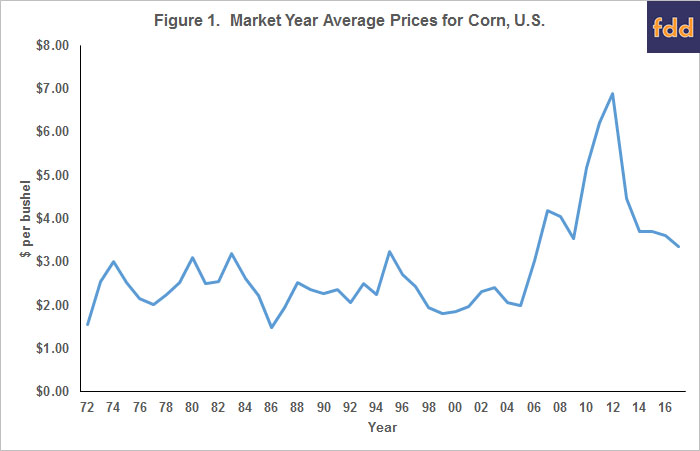 The June WASDE report also contained a price range forecast for the 2017/18 marketing year. The range is from $3.00 to $3.80. Significantly, the range is below $4.00 per bushel, signaling another year of low farm incomes. This 2017/18 price range is consistent with longer-run forecasts from USDA placing MYA price in the mid-$3.00 range through 2026/27 (USDA, Long-Term Projections).

Other sources also are suggesting a corn price below $4.00. In a recent webinar, University of Illinois economists forecast a $3.70 price for the 2017/18 marketing year.

Corn prices above $4.00 are possible, but do not seem likely. Corn prices from one year to the next can vary considerably. A simple time series model was developed using the data shown in Figure 1. This model has a dependent variable as MYA price for the next year and dependent variables for the current year’s MYA price, a dummy variable equally one for the years from 1972 and 2006, and the current year’s national yield deviation from trend. Using this model, a forecast for 2017/18 arrives at a 95% forecasting range of $3.20 to $4.94, with an average of $4.08.

A relatively large change in supply/demand or structural change likely is needed to get corn prices above $4.00 per bushel. A potential mover of price in each year is an actual national yield significantly different than the trend yield. When national yield exceeds trend, MYA price in the next year tend to be lower than the current year (see Figure 2). Conversely, MYA prices in the next year usually are higher than the current year’s MYA price when the national yields is below trend. Yields 20 bushels below trend are associated with MYA price increases around $.50 per bushel (see Figure 2). 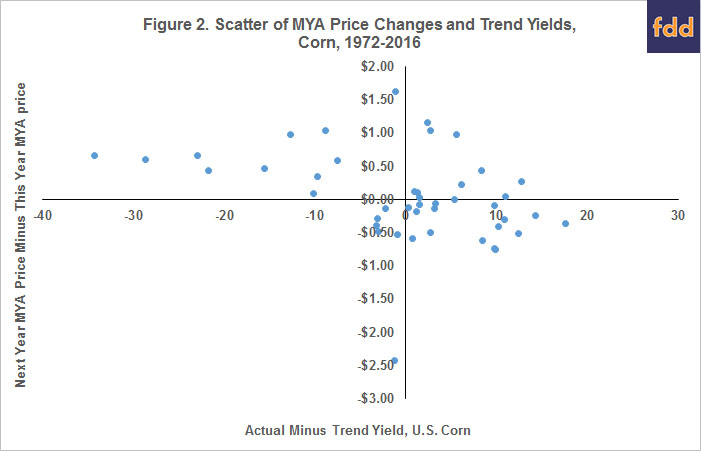 The critical period for determining corn yields is upon us, and there is considerable uncertainty about corn yields. Some areas are lacking in moisture and the 2017 growing year has been unusual. At this point, however, expecting a national yield that is 15 or more bushels below trend does not seem warranted. As a result, it does not seem likely that a low national yield will participate a significant 2017/18 price increase.

Other factors could lead to price increases. However, recent reports released by the USDA have not been supportive of corn prices (farmdoc daily, July 3, 2017).

At this point, planning for a continuation of below $4.00 corn prices seems prudent for 2017/18. While factors leading to price increases are possible, there is not a compelling reason to expect an increase. Using a corn price of near $3.70 and $3.80, similar to that used in many forecasts earlier in 2017, still seems reasonable at this point. Use of this price and near trend yields will result in relatively low 2017 farm incomes.