South America dominates the U.S. view of agricultural production in the rest of the world, in part because it has supplanted the U.S. as the leading producer of soybeans. Such a view is myopic, thus missing important storylines. One of them is the key role of the Black Sea area in the growth of production and exports of corn, soybeans, and wheat since 2000. Another is the implications for U.S. exports of farm commodities.

Source for the data used in this article is the U.S. Department of Agriculture, Foreign Agriculture Service (USDA, FAS). Data were collected for these areas: Australia, Black Sea, China, European Union (28 countries), India, North America, South America, and the World. The regions listed account for 87%, 99%, and 84% of world production of corn, soybeans, and wheat, respectively; and an even larger share of world exports (94%, 100%, and 93%, respectively). The Black Sea area is composed of Kazakhstan, Russia, and Ukraine. Due to variation in production of agricultural commodities caused by weather and other factors, averages are computed for the crop year periods of 2000-2001 through 2002-2003 and 2014-2015 through 2016-2017.

Figure 1 illustrates the well-known storyline that wheat production is distributed across the globe, soybean production is concentrated in North and South American, and the distribution of corn production lies between these two distributions. South America and North America account for the largest share of soybean and corn production, respectively. Their share is currently 18 percentage points larger than the share of the next largest producer (North America for soybeans and China for corn). The European Community accounts for the largest share of world wheat production at 21%, with China next largest at 17%. 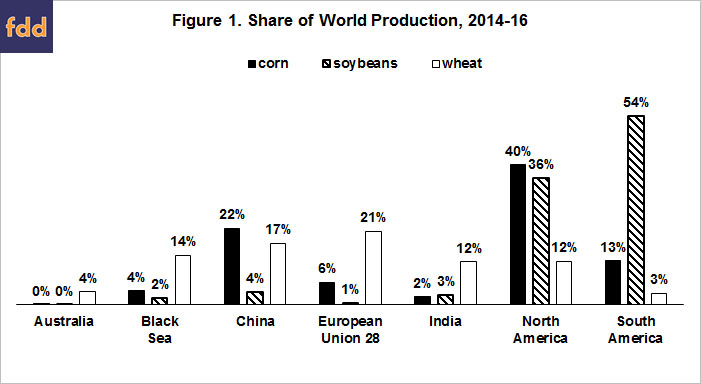 Change in Distribution of Production since 2000

The Black Sea is the only area with a larger share of world production in 2014-16 than 2000-02 for all 3 crops (see Figure 2). In contrast, North America is the only area whose share of world production of all three crops is at least -0.5% lower in 2014-16. The single largest change since 2000 is a 10 percentage point increase in South America’s share of world soybean production. It is now clearly the world’s leading soybean producer. At the turn of the 21st Century, South and North American were essentially tied with shares of 44% and 42%, respectively.

Change in Distribution of Exports since 2000

Exports have expanded faster than production for all 3 crops since 2000. The growth in exports with production in parenthesis are: corn, 85% (70%); soybeans, 140% (76%), and wheat, 65% (28%). The only area to increase its share of world exports in all 3 crops is the Black Sea (see Figure 3). Share of world corn and soybean exports increased the most for South America, but its share of world wheat exports declined. World export share declined the most for North America, with -23, -9, and -12 percentage point declines for corn, soybeans, and wheat, respectively. 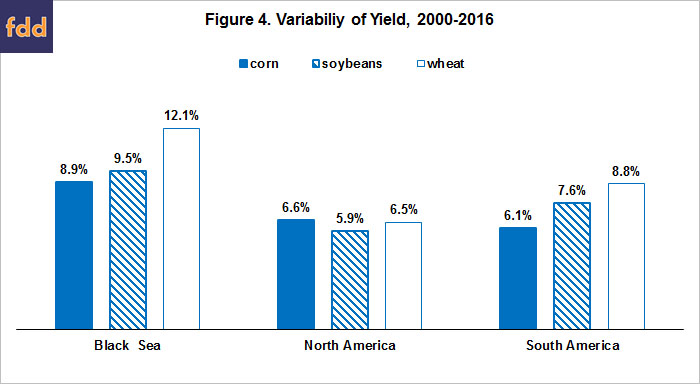 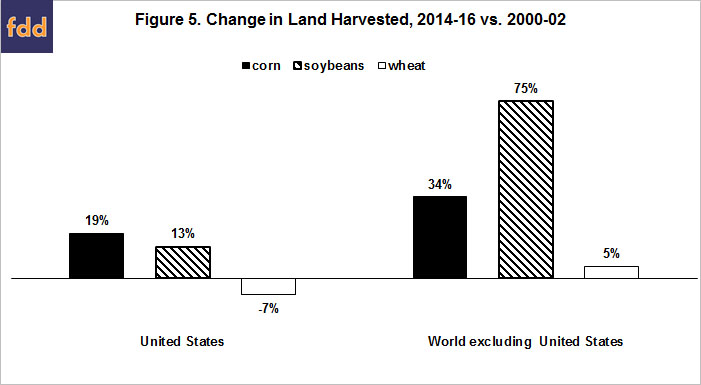 Coppess, J. "Historical Background on the Conservation Reserve Program." farmdoc daily (7):82, Department of Agricultural and Consumer Economics, University of Illinois at Urbana-Champaign, May 4, 2017.