Fertilizer prices have fallen in recent years, leading to lower fertilizer costs, major costs of producing corn and soybeans that have declined the most since the commodity price declines in 2013. In central Illinois, fertilizer costs for corn fell from $200 per acre in 2012 to $154 per acre in 2016. A further $20 per acre decrease is expected for 2017. Further reductions in 2018 are possible but may require farmers to reevaluate application decisions.

Table 1 shows fertilizer prices for anhydrous ammonia, diammonium phosphate (DAP) and potash as summarized from data of the Agricultural Marketing Service (AMS), an agency of the U.S. Department of Agriculture. AMS reports prices on a bi-weekly basis. Prices summarized in Table 1 are averages of those bi-weekly prices from October of the year preceding production through June of the year of production. For example, the 2017 anhydrous ammonia price of $509 per acre represents the average of the weekly prices from October 2016 through June of 2017. 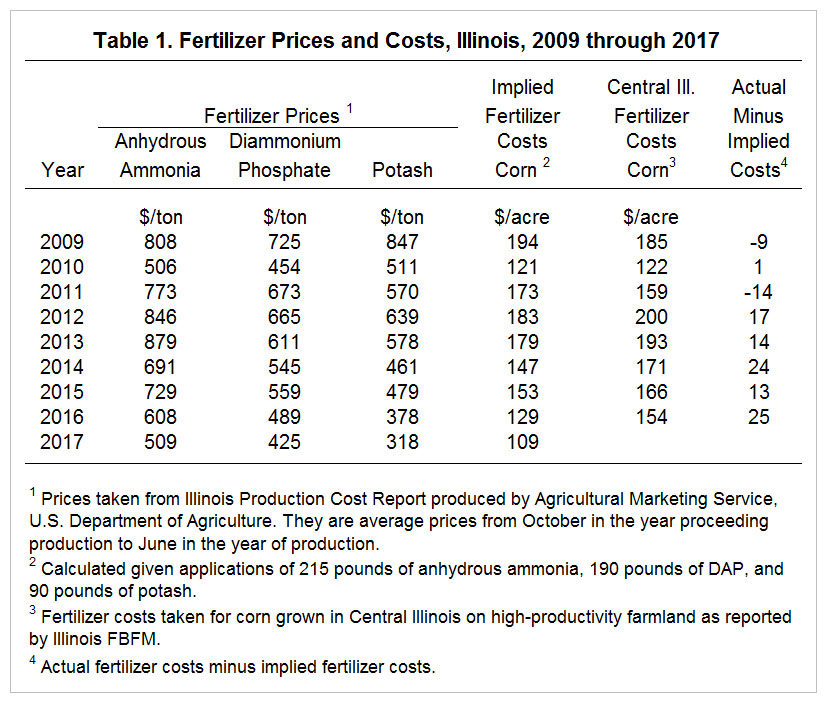 Actual fertilizer costs for corn grown on high-productivity farmland in central Illinois also are reported in Table 1. These costs represent summaries from farms enrolled in Illinois Farm Business Farm Management (FBFM). In the past five-years, farms within this category had average corn yields of 196 bushels per acre.

While actual costs would be expected to be higher than implied costs, the growing divergence is problematic. It suggests that fertilizer rates are increasing relative to 2009 to 2011 levels. Further reductions in fertilizer costs may be possible with rate decreases. Focus on phosphorus and potassium fertilizers may be warranted, making sure that soil test levels are not above those needed to maintain yields. Reduction in nitrogen rates also may be possible.

From a farmer perspective, there is some optimism that fertilizer prices will hold or move down from 2017 levels. Futures prices on natural gas contracts are not suggesting large increases in natural gas, a major cost component of nitrogen fertilizer. DAP prices have been decreasing slightly in recent months. If not from further price decreases, fertilizer costs could still be reduced by reducing rates. Setting a 2018 fertilizer budget value for corn of $120 per acre may be realistic.