Differences in the cost of living across U.S. complicates ongoing farm labor challenges. Farm industry groups, agricultural media, and even the popular press have covered declining availability of farmworkers as well as the increasing cost of farm labor. Many farms have been struggling to find crop workers and to afford competitive wages. As described in a recent farmdoc daily article, rising wages and expanding mandates for worker benefits will substantially increase farm labor costs over the next decade in states that account for the majority of U.S. fruit and vegetable production[1].

One might assume that these farm management challenges come with a benefit–higher wages for crop workers means a higher standard of living. However, absent for this discussion has been the cost of living in rural areas, which varies dramatically across the U.S and influences just how far farm wages will go. For example, an average full-time crop worker in New Jersey would have earned roughly $1,600 more than a counterpart in Pennsylvania in 2016, but these higher wages were offset by higher living costs in New Jersey’s agricultural heartland. After budgeting for housing, food, health insurance, and other necessities, the average Pennsylvania crop worker would enjoy about $2,500 more in annual discretionary income. In a similar vein, the actual impact of minimum wages also largely depends on living costs. A minimum wage worker in rural Washington might be considered middle class, whereas a rural worker earning California’s (significantly higher) minimum wage would likely struggle to make ends meet.

State-to-state differences like these have important implications nationwide for agricultural employers trying to attract farmworkers. These differences are likely to increase in the next five years as major minimum wage increases take effect in Arizona, California, New York, Oregon, and Washington. However, the effects of these minimum wage hikes may be partially counteracted by rural cost of living in these states, which is rising faster than in other major agricultural states.

To get a more accurate picture of how average crop workers’ wages affect their actual standard of living, we looked at cost of living in the 15 states that had the highest ratio of agricultural labor expenses to total agricultural production expenses (excluding Alaska, Hawaii, and states with less than $500 million in crop sales reported in the 2012 Census of Agriculture). Our analysis used average crop worker wages reported in the Bureau of Labor Statistics (BLS) Occupational Employment Statistics survey[2]. These figures reflect average wages for manual laborers and exclude supervisors, farm operators and their family, equipment operators, and specialist agricultural workers.

Minimum wage information came from state departments of labor (or equivalent). Rising minimum wages from 2012-2016 are part of a longer-term trend. Since the federal minimum wage reached its current level in July 2009, 27 states have increased their respective state-level minimums. Some (notably California) have narrowed or closed minimum wage exemptions relating to agricultural workers; however, many state minimum wage laws still include exemptions for some such workers (e.g., family members, minors, locals seasonally employed) or establish different minimum wages for different parts of the state. For example, counties in upstate New York will have a minimum wage of $12.50 per hour by 2021, compared for $15 for New York City and $14 for Long Island and Westchester County. Our analysis uses the minimum wage that applies to an adult worker in a rural area. We do not separately consider piecework, since state labor laws require, in principle, that piece-rate work provide at least a minimum wage to workers[3].

Finally, to compare farmworker living expenses across states, we calculated a statewide “rural living wage.” This figure is based on cost of living estimates from the MIT Living Wage Calculator for counties with a state that, combined, produce 95% of a given state’s crops by value. Following the MIT definition, our rural living wage approximates the minimum income necessary to independently meet basic needs in the areas where crop workers are employed in a given state. The rural living wage accounts for rent, health insurance, food, transportation, basic household goods, and taxes. It does not budget for savings, investment, or recreation. Throughout, we assumed a single farmworker without dependents, which affects estimated absolute living wage levels but not relative levels between states, which is the objective of our study. We used the BLS definition of full-time employment: 2080 annual hours of work. To reflect agricultural employment patterns, we weighted each county by the number of hired farmworkers reported in the 2012 agricultural census. Since we are interested in cost of living for crop workers, the rural living wage used here should not be taken as an estimate for all rural parts of a state; rural counties that do not employ many such workers will not have much weight in our model. Our weighting approach more accurately reflects where farmworkers live, than, for instance, simply excluding metropolitan areas. A great deal of agricultural production takes place in counties defined as urban counties or metropolitan areas. For example, practically all farmland in California’s Central Valley is within a Metropolitan Statistical Area.

Any calculation of “living wages” requires simplifying assumptions and prioritization of relevant variables. Our estimate does not take some farmworker conditions into account. In some cases, farm owners provide housing for workers. Such workers’ cost of living would be significantly lower. Most crop workers are employed only seasonally or part-time, accumulating fewer than 2080 annual hours of agricultural work. Children dramatically change household expenses: the MIT-calculated living wage for a worker with one dependent is roughly double that of the worker assumed in our study. In short, our estimate of a rural living wage is useful as a tool for comparing farmworker living costs across states rather than as an absolute estimate. 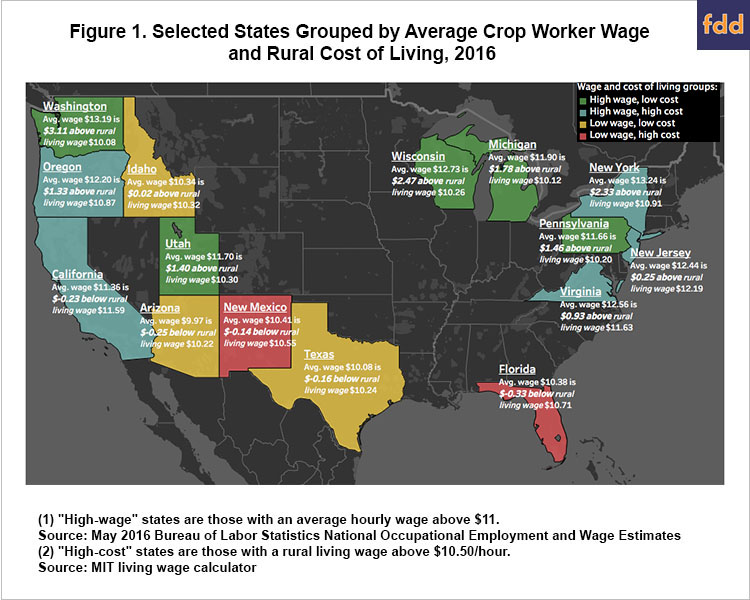 As suggested by Figure 2, average crop worker wages have increased since 2012, generally $1-2.00 per hour. The rural living wage rose across states as well, but typically at a rate lower than average wage increases. Crop workers are better off than in 2012, but real wage growth is lower than the nominal figure suggests. Notably, however, crop workers’ real wage growth is much higher than for other U.S. workers without higher education. From 2010 to 2015, for example, the American Community Survey found that median earnings for U.S. residents with a high school diploma (but no further education) rose by 2.7%[4]. In the same period, the national consumer price index increased by 9.5%. 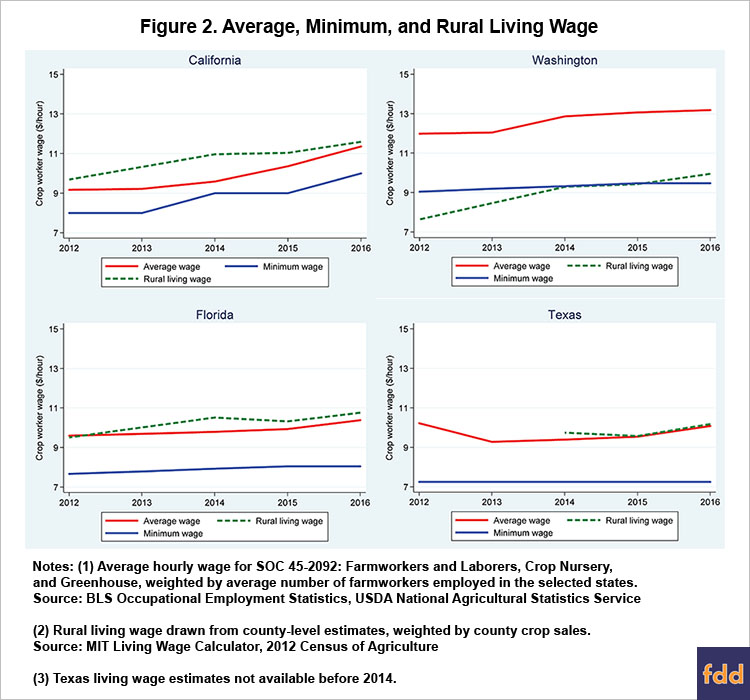 In every one of our selected states, the minimum wage was below our weighted measure of a rural living wage in 2016. Despite minimum wage increases in several covered states, the overall gap between minimum and rural living wages in our selected states grew slightly between 2012 and 2016. However, this situation is likely to change in the next five years.

Since 2012, rural costs of living in our selected states have risen at fairly constant rates. As such, a linear extrapolation is reasonable to gauge the impact of scheduled minimum wage increases. Where state minimum wages are linked to CPI, we assume annual inflation of 2%. This analysis does not attempt to project average crop worker wages, which are more volatile.

Five of our selected states have approved major minimum wage increases: Arizona, California, New York, Oregon, and Washington. These states’ rural cost of living is rising unusually quickly. Between 2014 and 2016, the rural living wage in these five states rose between $0.51 and $0.91 (see table) while it rose just $0.32 in the other ten states studied. Nevertheless, if these states’ respective rural cost of living increases at the same rate as in 2014-2016, planned rural minimum wages will exceed the rural living wage. 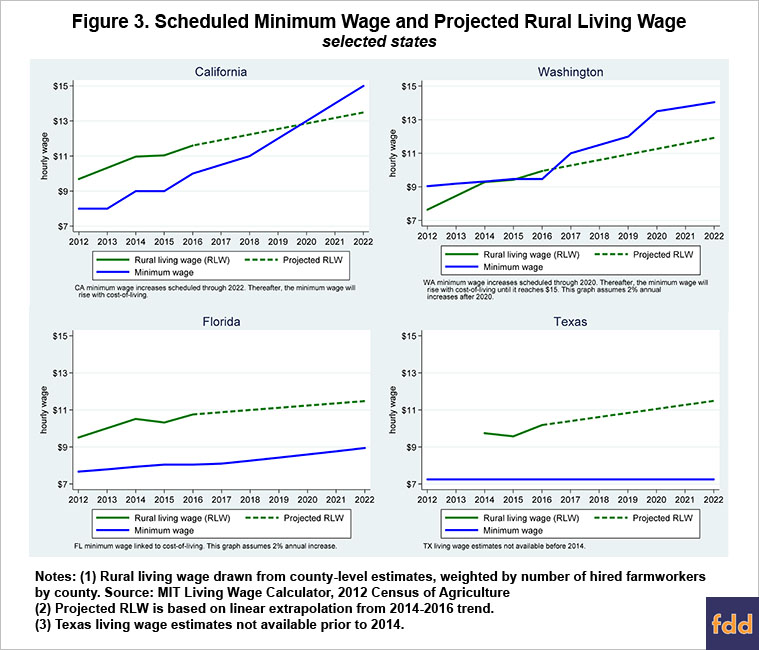 Minimum and rural living wages in 2022

As shown in the map below, the prospects for rural minimum wage workers in the next five years will vary dramatically from one state to another. Discretionary income for such workers is likely to rise in New York and the far western states. At the same time, states with lower minimum wages will face a large gap between rural living wages and statutory minimum wages (up to $6 in the case of Virginia). 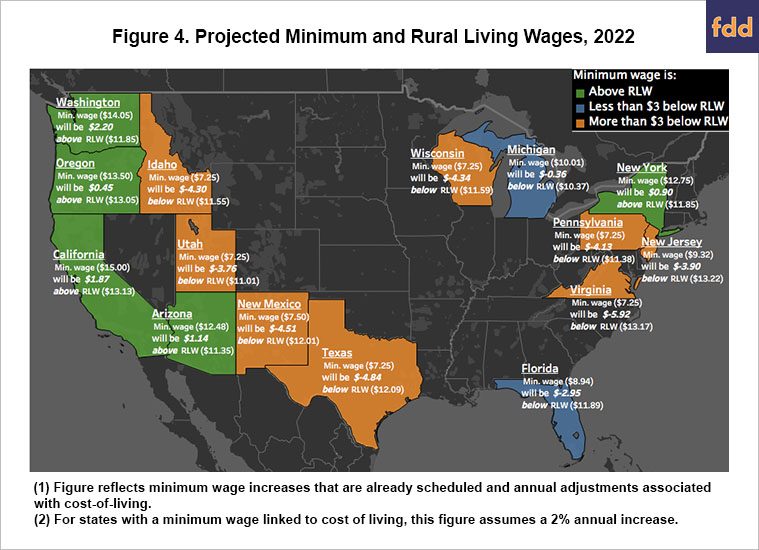 Implications for the livestock industry

Our analysis focused on crop worker wages because these workers (as defined by the BLS) are more numerous and less specialized than other farm employees and hence more comparable across states and crops. However, it is also possible to draw conclusions for livestock workers in our selected states. Using the process described in the first two sections above, we extended our analysis to livestock and animal jobs. Hourly wages for livestock and animal workers typically exceed those for crop workers, by an average of about $1.50 per hour over the past decade. Given this differential, average wages for livestock workers were above our estimated rural living wage for every state and every year studied. Despite the difference in average wages, trends appear to be the same for both. Overall, wage increases for livestock workers were comparable, in nominal terms, to those of crop workers: an increase of roughly $1 – $2 per hour from 2012 through 2016, partly counteracted by higher costs of living. The regional differences for crop workers discussed above generally hold for livestock workers.

The three largest dairy states[5] (California, Wisconsin, New York) did see higher increases in livestock worker wages during our study period, but also have relatively higher living costs. Trends were more ambiguous for major hog- and poultry-producing states, which also tend to have a longer cost of living. Of the top five hog producers (Iowa, Illinois, Minnesota, North Carolina, and Indiana), Iowa and Minnesota saw significant growth in livestock worker wages, while the other three did not. Among the top five states producing broilers, wages grew for Georgia and Mississippi livestock workers but did not for their counterparts in Arkansas, Alabama, and North Carolina.

Rural living costs will play a critical role in how crop workers are impacted by the ongoing and anticipated trend of increasing farm wages. Real average crop worker wages rose between 2012 and 2016, particularly relative to other jobs that don’t require higher education. However, due to substantial nationwide variation in living costs, higher wages historically have not always translated to a higher quality of life. As wages continue to increase, absolute wage levels as well as living costs will affect farms’ ability to attract and retain labor. As with the general economy, the cost of living further complicates discussions of farm wage levels and increases.

[1] Ifft, J., and T. Grout. “State labor regulations and labor-intensive agriculture.” farmdoc daily (7):111, Department of Agricultural and Consumer Economics, University of Illinois at Urbana-Champaign, June 15, 2017. [2] Standard Occupational Classification 45-2092: Farmworkers and Laborers, Crop, Nursery, and Greenhouse [3] Piece-rate laws vary by state, with some (e.g., California and Washington) requiring that workers receive at least minimum wage for every hour worked and others (e.g., Texas and Michigan) requiring simply that a piece-rate worker’s average hourly income equal or exceed minimum wage. [4] Based on 2010 and 2015 ACS tables “median earnings in the past 12 months (inflation-adjusted dollars) by sex by educational attainment for the population 25 years and over.” [5]Production rankings are based on 2015 USDA ERS Farm Income and Wealth Statistics.