In June, the Federal Reserve’s Open Market Committee (FOMC) raised the interest rate on overnight deposits (the discount rate) 25 basis points to 1.75%, mirroring similar rate increases in March 2017 and December 2016. The long-run expectations of FOMC members suggest that future rate hikes are expected. As interest rates move higher, farmers may see rising interest expenses on their operations (farmdoc daily, February 17, 2017). This article examines the relationship between the discount rate and the interest on farm operating loans.

The Discount Rate and Interest Rates

However, the discount rate is one of the major determinants of a bank’s “prime rate” – the rate charged to the most credit-worthy borrowers. The interest rate charged to borrowers is typically stated as a function of the prime rate, with riskier borrowers paying a greater premium above prime. 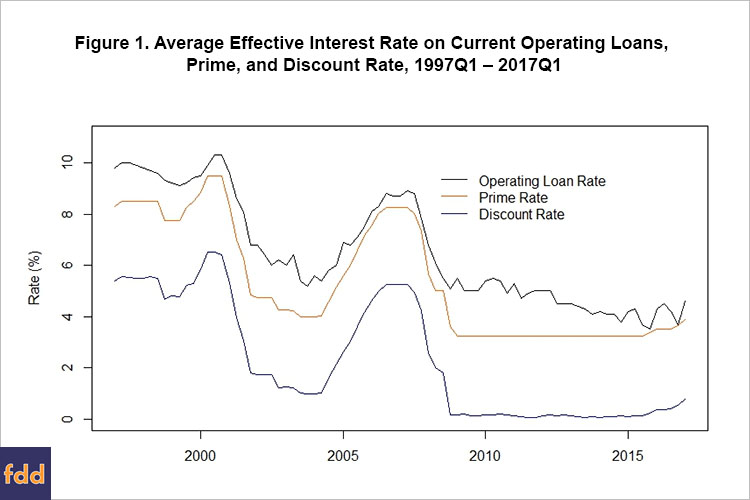 As shown in Figure 1, the discount rate exhibits a distinct pattern over the last 20 years. While the discount rate has generally trended downward since the early 1980s, the Fed has periodically adjusted rates in response to broader economic conditions. For example, during recessionary periods, such as the early 2000s and the Great Recession, the Fed lowered the discount rate to encourage investment. The Fed maintained historic low discount rates from 2009 through the end of 2015.

Prime rates closely mirror discount rate movements throughout the period. The difference, or spread, between the discount rate (blue) and the prime rate (orange) captures the risk of lending money to the most qualified borrowers instead of leaving the money in deposit at the Federal Reserve. Between 1997 and 2017, this spread was relatively constant, at approximately three percentage points.

Agricultural production is inherently risky, and as a result, agricultural producers are typically charged a rate above prime. The spread between the prime rate (orange) and the operating loan rate (black) therefore reflects the lender’s perceived risk of repayment. While the spread between operating loans and prime is generally positive, it fluctuates through time as the perceived riskiness of repayment changes.

In summary, as the Federal Reserve continues to increase the discount rate, prime rates are expected to increase. Farmers can presume additional upward pressure on borrowing costs related to the premiums charged on agricultural loans. Figure 2 demonstrates that delinquency rates on operating loans have increased steadily since the fourth quarter of 2014. As a result, lenders are likely to increase the spread between prime and operating loan rates to reflect the increasing risk in agricultural lending. Previous research has demonstrated that higher discount rates are associated with downward pressure on agricultural commodity prices (farmdoc daily, December 11, 2015), and falling revenues may lead to further increases in farm loan delinquencies.

It is important to note, however, that the Fed has continually stated that future rate increase will be modest and measured. As a result, farmers should be able to plan for the potential increases in the costs of borrowing.

Dorfman, J. "Rising Interest Rates Won't Be Good for Commodity Prices, But It Won't Be Too Bad Either." farmdoc daily (5):230, Department of Agricultural and Consumer Economics, University of Illinois at Urbana-Champaign, December 11, 2015.

Krapf, B., D. Raab, and B. Zwilling. "Agricultural Debt Continues to Increase." farmdoc daily (7):30, Department of Agricultural and Consumer Economics, University of Illinois at Urbana-Champaign, February 17, 2017.