Today’s article provides the mid-year update on RIN generation for 2017. Generation figures and projections are based on available data from EPA’s EMTS through June of 2017, with annual projections compared with the target mandate levels outlined in the final rulemaking for 2017. The previous RIN update (farmdoc daily May 17, 2017) provided a summary of RIN generation through the first quarter of 2017 as well as an update to estimated RIN stocks available for 2017 compliance.

Figure 1 plots monthly D4 RIN generation relative to implied monthly mandate needs (annual mandate divided by 12) using data from the EMTS through June 2017. Gross generation of D4 RINs averaged nearly 219 million per month during the first quarter, and increased to 346 million per month in the second quarter. Extending the rate of generation in the second through the end of the year would result in 3.8 billion D4 RINs for 2017. 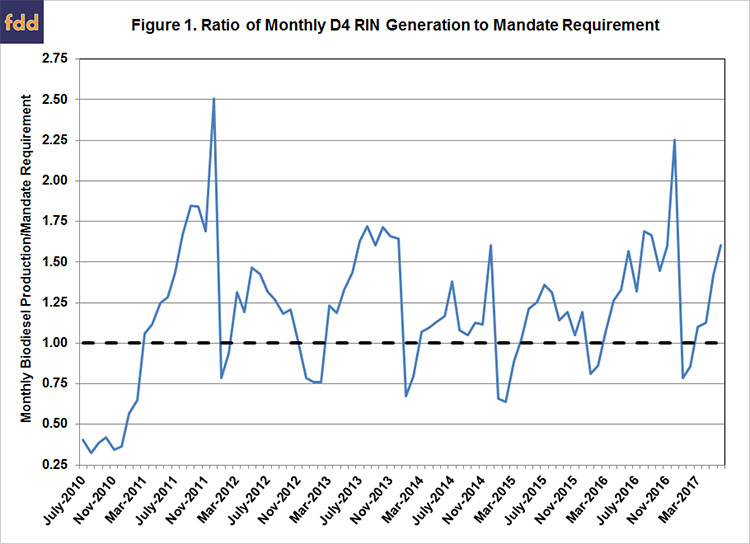 Figure 2 plots D6 RIN generation relative to implied mandate needs through June 2017. Monthly gross generation has been relatively steady through the first half of the year, averaging 1.22 billion per month in the first quarter and 1.23 billion per month in the second quarter. Gross generation projections for the year would currently be between 14.8 and 14.9 billion D6 RINs. Department of Commerce data on exports of denatured ethanol for fuel use through May are reported at 136 million for the year, suggesting total exports representing 326 million D6 RINs for 2017. Accounting for exports results in a net generation estimate of approximately 14.5 billion D6 RINs, which would fall 500 million RINs short of the 15 billion non-advanced or renewable mandate component for 2017. 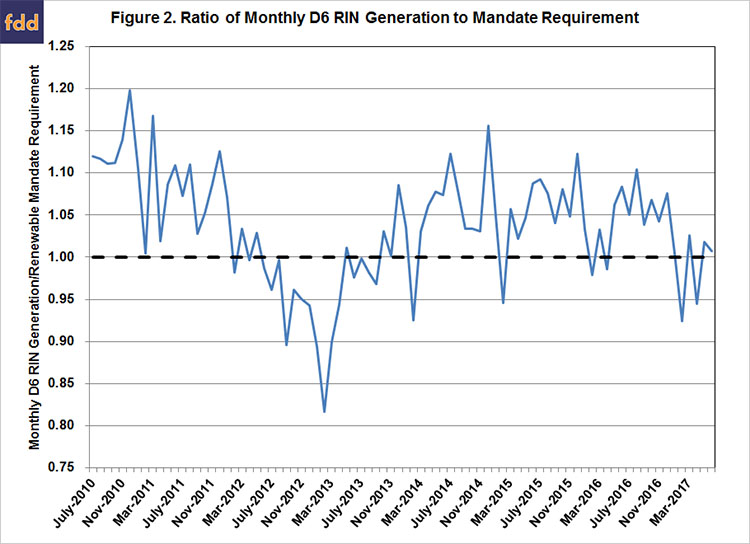 Relative to the first quarter of 2017, the rate of generation across all RIN D-code categories increased during the second quarter of the year. The increase in generation of D4 and D5 RINs may be sufficient to meet non-cellulosic advanced mandate needs in 2017. However, generation of D3 and D7 RINs is still projected to fall short of the 2017 cellulosic mandate by approximately 100 million gallons, and net generation of D6 RINs is projected to fall short of the renewable mandate component by 500 million RIN gallons. Thus, generation of D3, D7, and D6 RINs will need to increase further during the last 6 months of 2017, or a portion of available RIN stocks will be required to fulfill mandate compliance requirements.