Net incomes on Illinois grain farms are forecast for 2017 using recently released yield estimates by U.S.D.A. (see Crop Production) and 2017 prices projected by University of Illinois economists during an August 11, 2017 webinar. Forecast 2017 net incomes are down from 2016 levels primarily due to lower yields. Decreases in non-land costs should partially offset revenue declines from lower yields. U.S.D.A. yield estimates for Illinois are above trend levels and could decline due to dry August weather. Reductions in yields will result in lower incomes if no positive price response occurs. As always, net incomes will vary across Illinois, with areas of lower yields facing lower incomes.

Incomes are estimated by first evaluating differences from 2016 to 2017 in yields, revenues and costs on a per acre basis. These items are summarized in Table 1 and represent averages for Illinois. The result of these calculations is to arrive at a difference in per acre income averaged across the state. Each acre is estimated to have -$17 per acre of less income in 2017 than in 2016 (see the final line in Table 1). Items contributing to this reduction are described below. 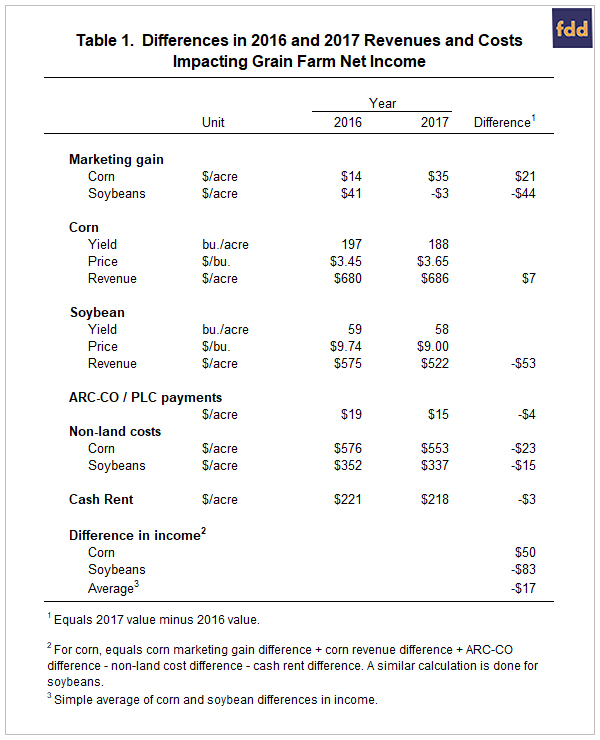 Note that these ARC-CO payments are received a year after production. In the fall of 2016, farmers and land owners received 2015 payments which averaged $36 per acre. The ARC-CO payment received in the fall of 2017 will average about $19 per acre, much lower than in 2016. While accrual income will differ little across years, cash flow from ARC-CO will be less in 2017.

A $17 decrease in per acre income results in lower projected 2017 per farm incomes as compared to 2016. Figure 1 shows average income for grain farms enrolled in Illinois Farm Business Farm Management (FBFM). These are per farm income. The -$17 per acre difference suggests a 2017 net income of around $60,000 per farm. 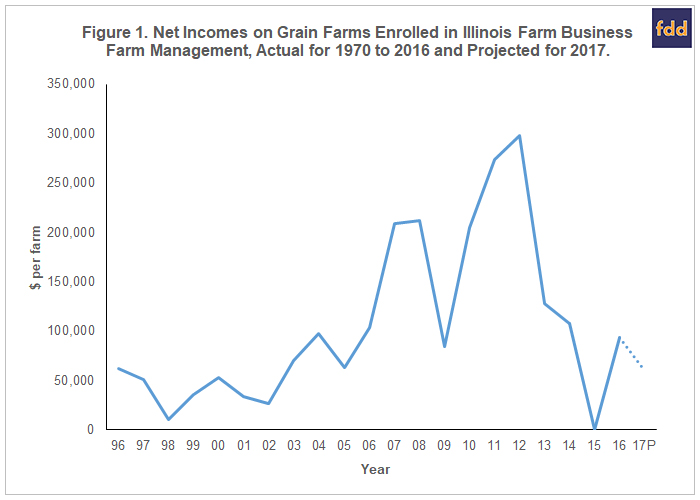 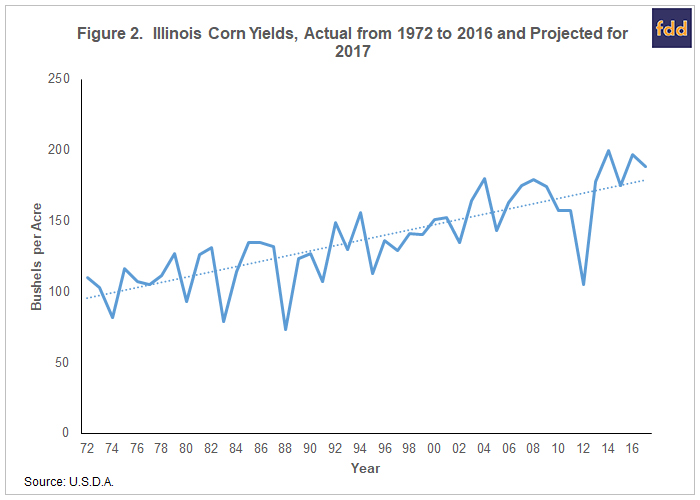 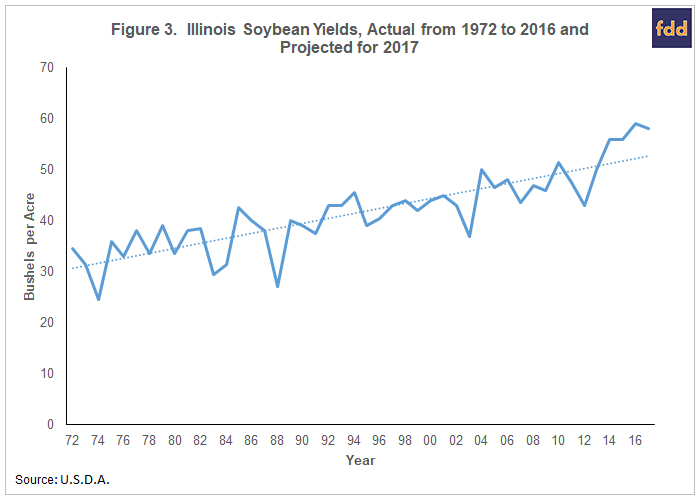 August weather has yield impacts, particularly on soybeans. August weather so far has been drier than normal, suggesting that USDA yield estimates may be high (see farmdoc daily, August 14, 2015). Yield estimates could be lowered which would have a negative impact on 2017 income forecasts. Of course, positive price responses may occur because of lower expected yields, partially or totally mitigating lower expected yields.

This early forecast of 2017 incomes could change. Changes most likely will originate from differences in actual yields and actual prices from those used in forecasts. In my opinion, USDA yields used in forecasts may decline due to dry August weather. Time will tell if that is the case. Offsetting lower yields; however, could be positive price responses.

As always, there will be variability in net incomes across farms. Some farms will have above average incomes and vice versa. One would expect those areas in central and southern Illinois experiencing dry weather and drought will have lower yields and lower incomes. Those areas with excess moisture in northern Illinois could face lower yields and incomes as well. Crop insurance will aid in cushioning low yields, but farmers will face losses before crop insurance payments occur.

It seems safe to predict that 2017 net incomes will average lower than 2016 incomes. The only way lower incomes would not occur is if there are large, positive increases in corn and soybean prices. In some low yielding areas those incomes could be considerably lower than those changes shown here. Given lower 2017 incomes, some deterioration of working capital should be expected.