Crop budgets for 2018 now are available on farmdoc. In addition, 2017 crop budgets have been revised and 2016 returns and costs have been updated. Overall, 2018 budgets suggest more of the same economic conditions that have occurred since 2013. Returns will be small and cash flows will be tight. This situation will continue until corn price exceeds $4.00 per bushel, soybean price exceeds $10.00 per bushel, and yields are at or above trend yields.

Three publications have been updated:

All three publications have tables for northern, central, and southern Illinois, with central Illinois including tables for high-productivity and low-productivity farmland. 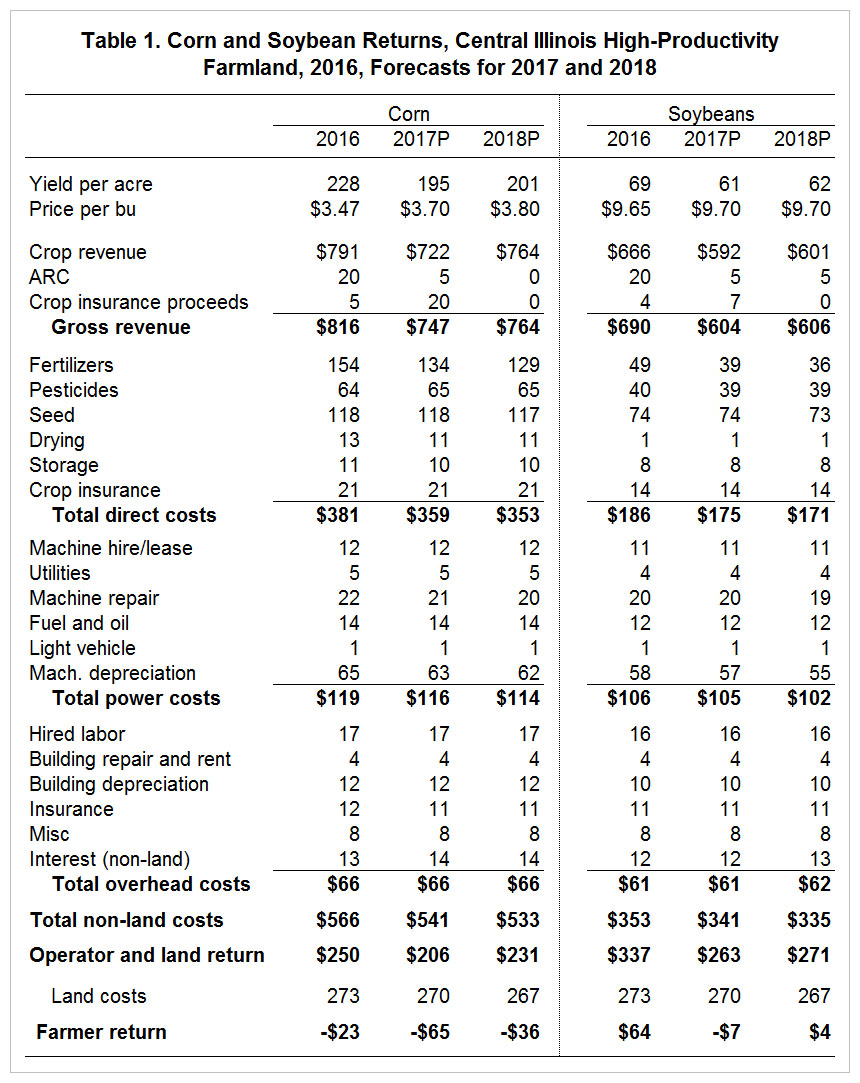 For 2017, a 195 bushel per acre yield is used, which is 5 bushels below trend. Many areas across central Illinois have had very little rain, and the 195 bushel yields will be high. Other areas, particularly in western Illinois, have been receiving rains. Yields will come into clearer focus in August as crop tours commence and USDA releases its estimated yields. For 2017, a $3.70 per bushel price is used, close to harvest-time bids for fall delivery of grain. The $3.70 price used in budgets is well above the $3.40 per bushel mid-point contained in the July 2017 WASDE report.

Land costs: Land costs represented in Table 1 are cash rents. Cash rents are projected to decrease in 2017 and 2018.

First, the 2017 and 2018 projections can change. Soon, better estimates of 2017 yields will be forthcoming and those yields could result in different return forecasts. Furthermore, lower national yields could lead to higher prices, which could result in higher revenue and returns for 2018. 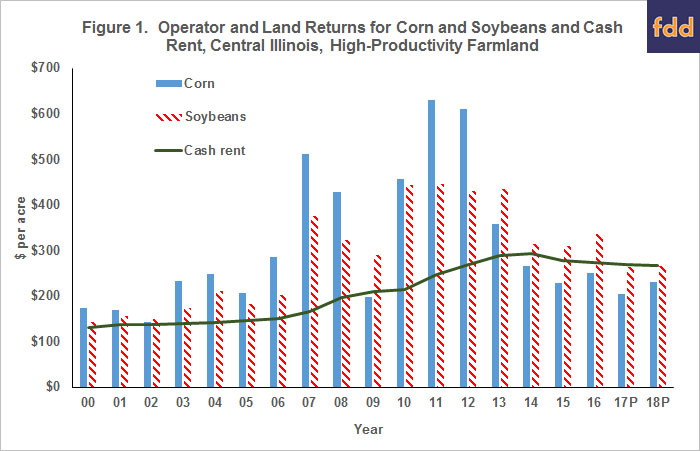 Fourth, cash flows will again be tight in 2017. Incomes likely will be lower in 2017 than in 2016. As of yet, prices projected for 2017 have not offset lower yields. Given tight cash flows, downward pressures will be felt on 2018 cash rents.

At this point, lower returns should be expected in Illinois for 2017 and 2018 than occurred in 2016. As is always the case, there will be variability in incomes. Those farms with higher yields will tend to have higher incomes.

More information will come out in August as 2017 yields come into clearer focus. The 2017 and 2018 projections will be revised if yields are substantially different than trend or prices change from current levels.

Schnitkey, G. "How Much More Do Capital Purchases on Grain Farms Need to be Reduced?" farmdoc daily (7):114, Department of Agricultural and Consumer Economics, University of Illinois at Urbana-Champaign, June 20, 2017.

Schnitkey, G. "Revenue and Costs for Corn, Soybeans, Wheat, and Double-Crop Soybeans, Actual for 2010 through 2015, Projected 2016 and 2017." Department of Agricultural and Consumer Economics, University of Illinois at Urbana-Champaign, released February 2017, updated July 24, 2017.