The National Agricultural Statistical Service (NASS), an agency of the U.S. Department of Agriculture, released 2017 cash rents and land values for major agricultural producing states. For Illinois, the 2017 cash rent was $218 per acre, down by $3 per acre from the 2016 level. This decrease in cash returns have been relatively modest, particularly given the levels of farmland returns. If corn prices continue to remain below $4.00 per bushel, cash rents would have to decline by about $60 per acre for farmers to have the same average return level as from 2000 to 2005. Cash rent declines of that size are not likely in 2018; however, downward pressures of cash rents will continue.

Cash rents were on an increasing trend from 1987 until 2014, averaging an increase of 3.6 percent per year (see Figure 1). Faster growth occurred from 2006 to 2014 when cash rent increased an average of 7.4 percent per year. The period from 2006 to 2014 period was characterized by strong corn and soybean prices caused by increased use of corn in producing ethanol, growing export demand for soybeans, and several years of yield issues in major grain producing areas. These strong prices then led to high returns, precipitating the rise in cash rents. 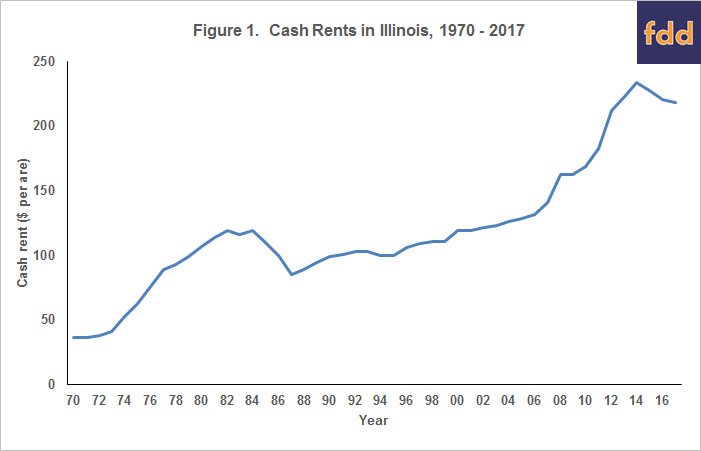 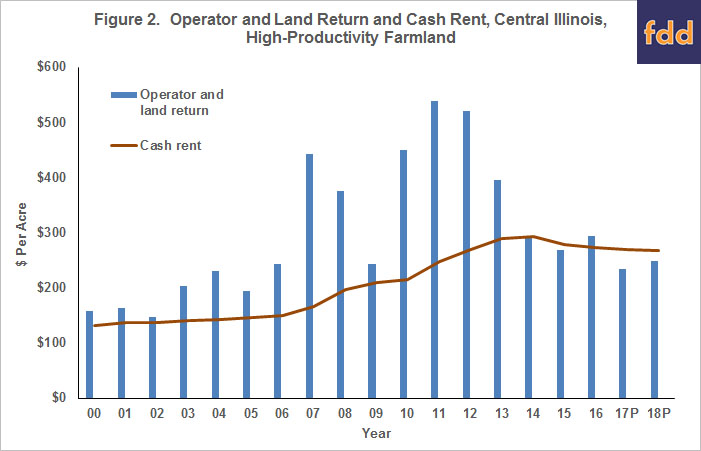 Between 2000 and 2005, operator and land return were above cash rent by an average of $43 per acre. These years were not exceptionally good income years in agriculture, practically the years between 2000 and 2002.

For 2017 and 2018, operator and land returns are projected to be lower than average cash rents (see Revenues and Costs for Corn, Soybeans, Wheat, and Double-Crop Soybeans for more detail on projections). These projections have yields at trend levels, corn prices below $4.00 per bushel, and soybean prices below $10.00 per bushel. These levels of corn and soybean prices will not generate returns above cash rents unless yields are well above average. Of course, the 2017 and 2018 projections could change. Both yields and prices could be higher than are currently anticipated.

Why Have Cash Rents Not Declined More?

First, the high returns from 2006 through 2013 led to high incomes and farmers increased the liquidity, solvency, and net worth positions of their farms (see farmdoc daily, October 4, 2016). Working capital increases during 2006 to 2013 have allowed farmers to pay higher cash rents since 2013. The higher returns during 2006 through 2013 also fostered attitudes in “catching up” between some farmers and land owners. Many land owners did not receive as high as possible cash rents prior to 2013, causing farmers to not lower cash rents as much as farmland returns have been lowered since 2013.

Second, many expect that commodity prices will increase. For example, corn prices above $4.00 per bushel would cause much less of a need to cut costs and there are good reasons to believe that prices will return to higher levels. However, prices continue to be below $4.00 from 2013 to the present, a period of five years. Possibilities of higher prices remain but have not occurred yet.

Outlook for Cash Rents in 2018

More downward pressure could be felt in setting 2018 cash rents than during the period when 2017 cash rents were set. At this point, yields look to be lower in 2017 than they were in 2016. Northern Illinois appears to have been too wet and much of central and southern Illinois was too dry. As of yet, there has not been an upward price response to lower yields. Higher prices could counter lower yields. ARC and crop insurance payments are possible, but these payments will not lead to profitability in most cases, instead reducing very low returns. Lower yields and similar prices suggest that 2017 incomes will be lower than 2016 incomes. Lower incomes would then lead to declines in working capital. As working capital decreases, the ability to pay higher cash rent decreases.

In my opinion, a key will be price response this fall. If prices do not increase from current levels, farmers may question the likelihood of higher prices in the near future. Having little price response would be particularly dampening to farmer future expectations if yields are below trend. Building budgets with longer-term prices below $4.00 for corn and $10.00 for soybeans could lead farmers to question the advisability of paying current cash rent levels.

Schnitkey, G. "Revenue and Costs for Corn, Soybeans, Wheat, and Double-Crop Soybeans, Actual for 2011 through 2016, Projected 2017 and 2018." Department of Agricultural and Consumer Economics, University of Illinois at Urbana-Champaign, July 2017.