USDA released its August Cattle on Feed report on Friday along with the monthly Livestock Slaughter report. The two reports provide some updated information to use in projecting future cattle and beef supplies. The Cattle on Feed report confirmed that the on feed inventory continues to be larger than a year ago, as the August inventory was 1.5% larger on August 1, 2016. Marketings of cattle from feedlots with capacity of over 1,000 head increased 2% in July vs. a year earlier, while net placements (placements minus other disappearance) changed little (up less than 1%) compared to July 2016. This was a big shift in the placement pattern compared to the March through June time frame when net placements increased by 12 to as much as 17% (in June) compared to the same month in 2016. Placements on feed during July typically fall below well below June’s, but the decline this year was larger than usual. Finally, by at least one measure, cattle feeders appeared to slow down the pace of fed cattle marketings as fed cattle marketings expressed as a percentage of the on-feed inventory fell below a year earlier in July. July marked the first month in 2017 that marketings as a percentage of the on-feed inventory dropped below the year ago level. 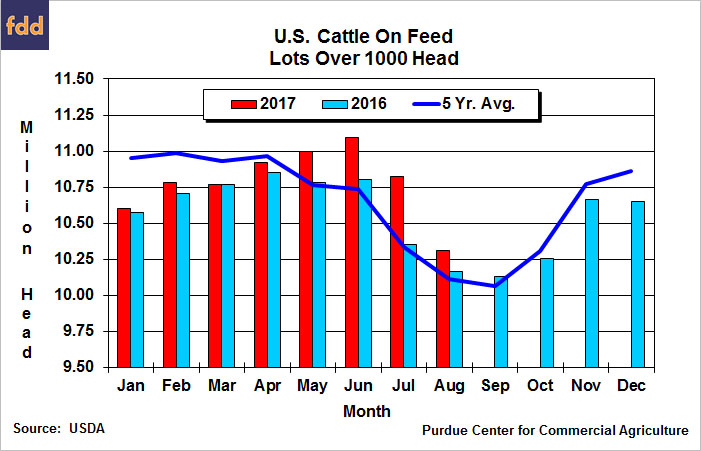 Cattle slaughter continued to run well above a year earlier during July, with daily commercial slaughter averaging 5.5% above the prior year. So far, this year’s daily slaughter volume has averaged 6.4% above last year, which is a bigger increase than the trade was expecting at the outset of the year. Commercial beef production during the first seven month of 2017 totaled 4.7% above the same period in 2016 as weights averaged below a year ago. For example, carcass weights during July averaged 1.3% below a year earlier, which helped hold the year-to-year increase in beef production down to 4.1 %. Although dressed weights during July were lower than last year, the percentage decline was the smallest since February. Seasonally, weights tend to bottom out in May and then increase until mid-fall. That pattern appears to be holding true this year as carcass weights during July were 21 pounds heavier than in May, when weights bottomed out.

An additional consideration with respect to herd expansion/contraction is the, as of now, unknown impact hurricane Harvey will have on Texas’ cattle producers. Texas is home to the largest beef cow inventory of any state in the nation and, as of this weekend, 54 Texas counties, where over 1 million beef cows reside, were declared a disaster area. How large of an impact the storm will have on both fall 2017 calf marketings and cow inventories is not clear, but the magnitude of the rainfall totals and resultant flooding point to the potential for significant calf and cow losses.

Cash prices for slaughter cattle have fallen sharply since peaking in early May at $145 per cwt. Cash trade in the Southern Plains for slaughter steers last week took place primarily at $107 per cwt., nearly $3 lower than the prior week’s average. It was the sixth consecutive weekly decline for cash slaughter cattle prices. After trading well above prior year levels during much of the spring, prices have now traded below the year ago level for the last four weeks. In 2016, slaughter steer prices bottomed out in October at $98 per cwt. Slaughter cattle prices this fall are not expected to drop that far, but cattle feeders’ reaction to declining profitability will be important. If feeders resist selling cattle in expectation of higher prices, it could push weights and beef production up, which would exacerbate price weakness.

Prices for 500-600 pound steers in Kentucky have also declined since peaking in early June at $168 per cwt. The last two weeks 500-600 pound steer prices in Kentucky averaged about $147, close to the year ago level. Calf prices tend to weaken seasonally from summer into fall as supplies increase. During fall 2016, steer calf prices in Kentucky bottomed out at about $112 per cwt. Expectations for somewhat stronger fed cattle prices than in 2016, combined with expectations for more favorable costs of gain, are expected to provide more support for calf prices this fall than in 2016, which could provide a fall quarter average for 500 to 600 pound steers ranging from the high $120s to the low $130s. 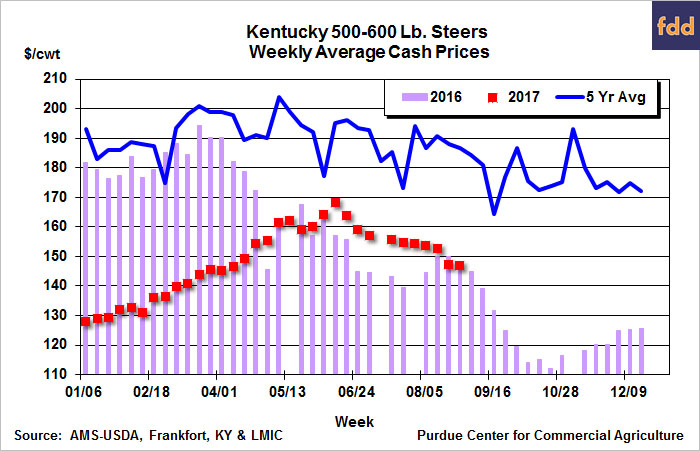