The U.S. has been more dependent than other major exporters on yield to increase production of corn, soybeans, and wheat (farmdoc daily, July 13, 2017). This article continues to examine the role of yield. A strong, positive association is found between long-term growth in U.S. yield and change in acres planted to 9 historically large acreage U.S. farm program field crops. Planted acres increased or declined less for the crops with the largest increase in yield (corn, upland cotton, peanuts, rice, soybeans) while declining most for crops with the smallest increase in yield (barley, oats, sorghum, wheat). This finding implies both the importance of funding yield-enhancing research and a potential role for it to improve environmental performance.

Data and Procedures: Percent change in planted acres and yield per planted acre is calculated between two 5-year periods: 1978-82 crop years and 2013-17 crop years. Five year averages are used because of the annual variability in yield and acres. Data for the calculations are from Quick Stats (U.S. Department of Agriculture (USDA), National Agricultural Statistics Service). Three other decisions regarding the data and procedures are discussed in data note 1.

Long-Term Yield Growth: The growth in average yield per planted acre from crop years 1978-82 to 2013-17 divides crops into 2 groups: corn-cotton-peanuts-rice-soybeans with increases of 57% to 63% vs. barley-oats-sorghum-wheat with increases of 21% to 30% (see Figure 1). 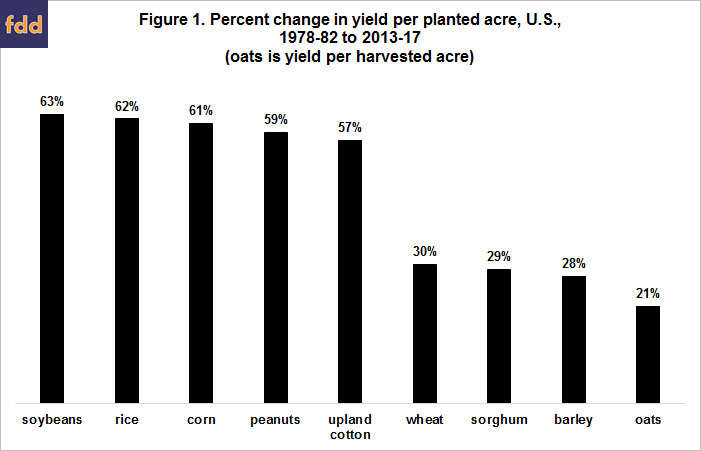 Long-Term Yield Growth and Acreage Change: A strong positive relationship exists between long-term yield growth and acreage change. A linear regression finds that the different percent changes in yield across the 9 crops explains 82% of the variation in their different percent changes in planted acres (see Figure 2 and data note 2). A 1 percentage point larger cumulative increase in yield is associated with a 1.9 percentage point increase in planted acres. Planted acres increased for soybeans, corn, and peanuts, which have 3 of the 4 largest increases in yield. In contrast, planted acres declined by at least 30% for the 4 crops with the lowest growth in yield (oats, barley, sorghum, wheat). 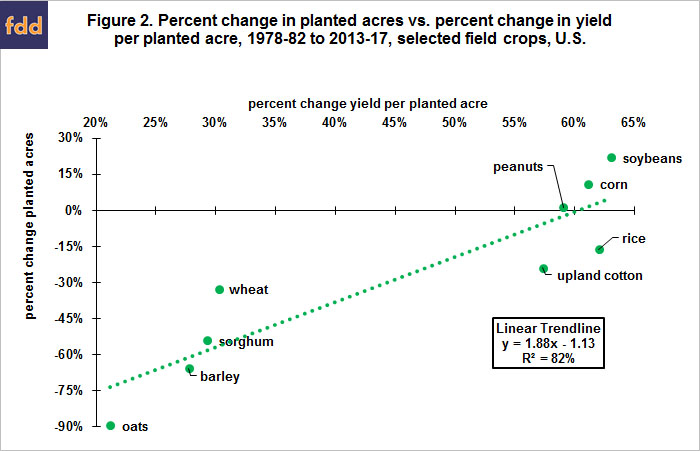