Controversy has surrounded determination of ARC-CO (Agriculture Risk Coverage county) yields. One component of this controversy is the difference in the county yields determined by NASS (National Agricultural Statistics Service) and RMA (Risk Management Agency), both U.S. Department of Agriculture units. This yield difference is examined for the 2009-2015 corn crops. While the average NASS-RMA county corn yield difference across counties and years is relatively small, large yield differences are not uncommon for a given county across years and across counties in a given year. A regression analysis finds the absolute difference in yields is statistically larger for counties with higher expected yields, higher yield variability, and a smaller share of planted acres that are insured, but is statistically smaller for counties in Midwest states. These findings are reasonable, but the regression explains only 12% of the variation in the yield differences. Controversy is thus likely to continue since a large difference that cannot be explained will lead to questions about which yield is more accurate and thus whether payments by county commodity and insurance programs are fair.

Data: NASS and RMA yields for counties, as modified by FSA, are available on the FSA website for selected crops for the 2009-2015 crop years. By statute, NASS publishes a harvested acre yield. In contrast, ARC-CO uses a planted acre yield. Thus, FSA must modify the NASS data. To calculate a NASS-based, ARC-CO yield for a county, FSA divides NASS reported production by NASS reported planted acres for all crops except corn, barley, oats, grain sorghum, and wheat. For these 5 crops, FSA modifies the calculation to exclude acres not intended for harvest as grain, such as acres for haying, grazing and silage. Specifically for the 5 crops, FSA divides NASS reported production by (NASS reported harvested acres plus RMA reported unharvested acres).

To calculate a RMA-based, ARC-CO yield for a county, FSA divides RMA reported production by RMA reported planted acres, provided at least 5 yield observations exist for the county and these observations account for more than 25% of FSA reported acres in the county. County planted yields published on the RMA website may not match FSA’s RMA-based, ARC-CO yields due to the data selection criteria used by FSA or because the two yields are calculated at different times and thus may be based on different values for county production and planted acres.

FSA also publishes the yields it used to calculate ARC-CO payments for a county and crop year. See the appendix for a discussion of the process FSA uses to determine these yields. 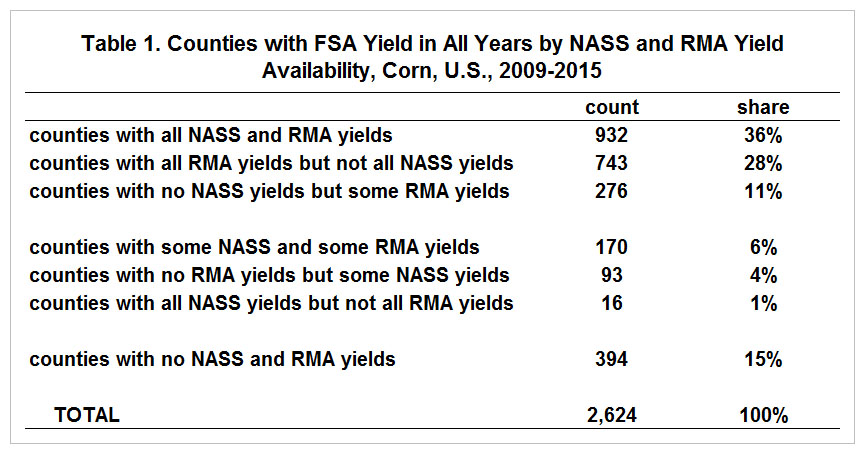 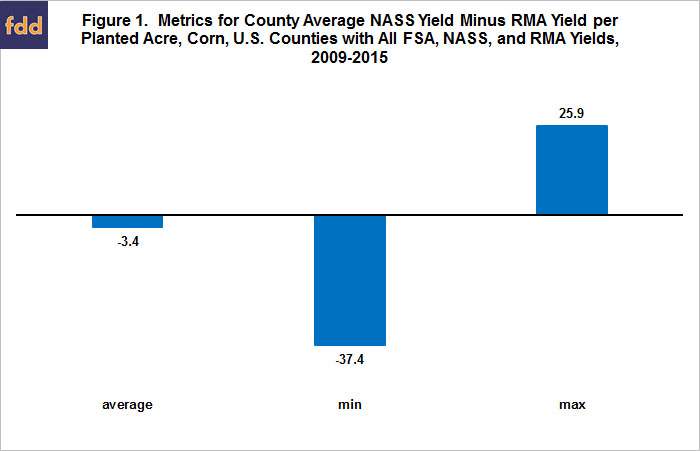 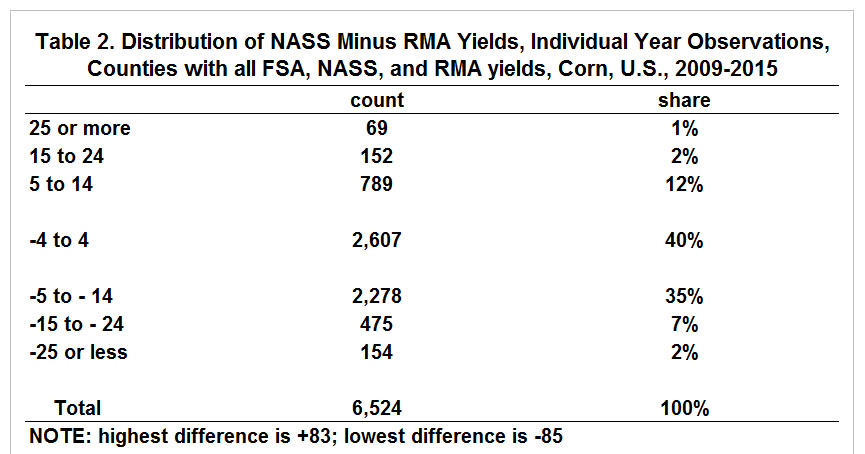 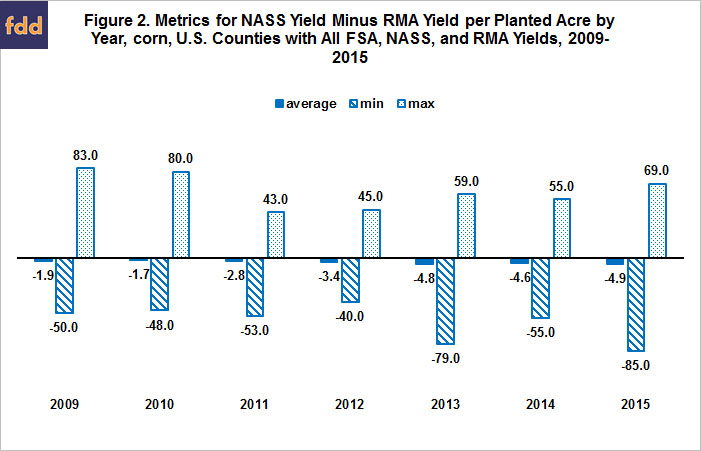 Analysis of NASS-RMA yield differences: The large variation in yield difference by county and year prompted a regression analysis to assess whether the variation can be explained. For this analysis, the observations were all county-year combinations for which both a NASS and an RMA yield existed, regardless of whether the 2 yields existed for all years for the county. A broader criterion was used to determine the data set for the regression analysis in order to include all available variation in the analysis. County-year observations totaled 10,409. 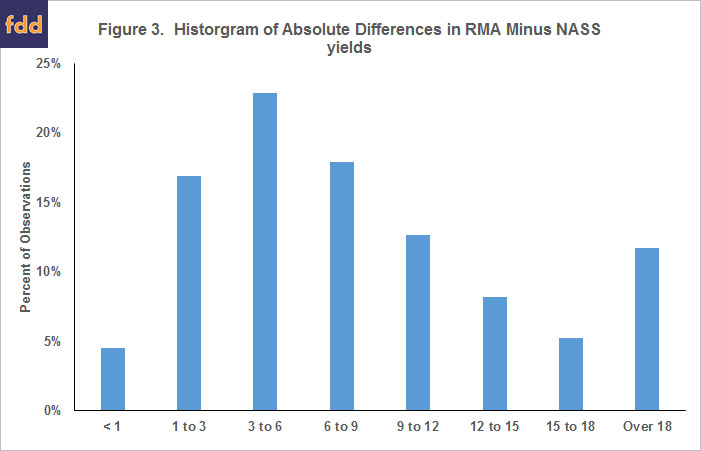 Somewhat surprisingly, number of acres planted to corn in a county did not impact the absolute yield difference.

The variables included in the regression equation explained 12% of the total variation in NASS-RMA yield difference (R2 = 12%). Thus, the variables in this regression do not explain 88% of the variation, implying that other factors, including random error, are important. 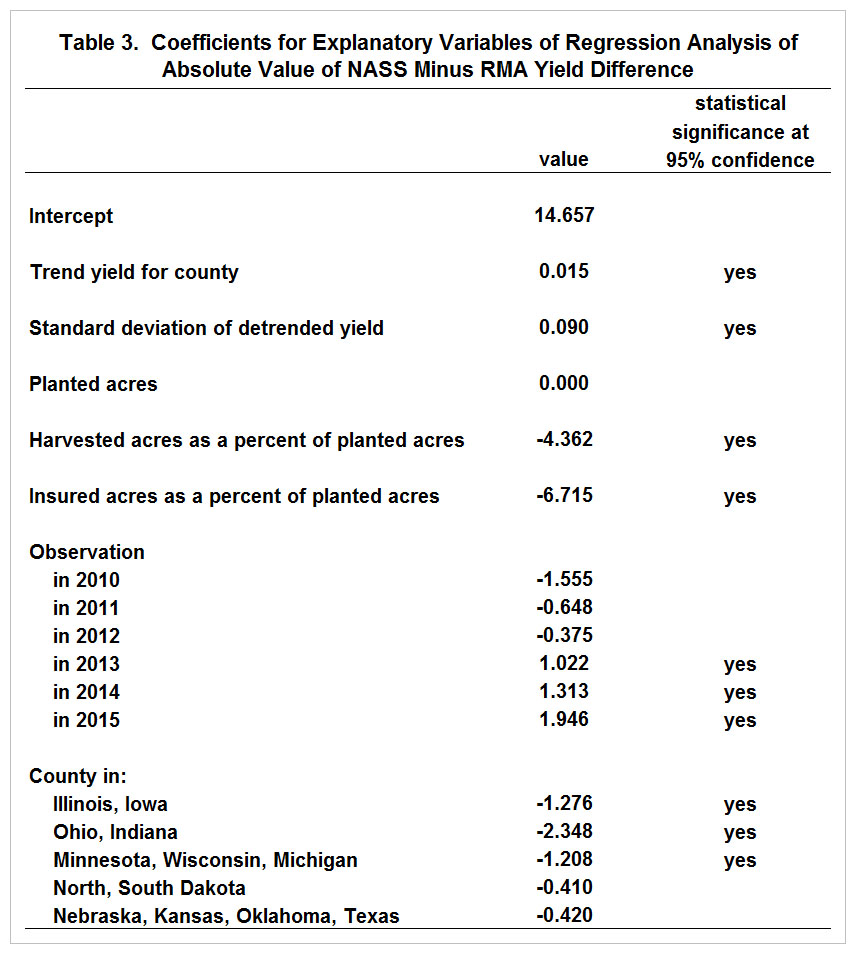 Appendix – FSA Procedures for ARC-CO Yields: Determination of ARC-CO’s payment rate for a county and crop requires (a) historical yields for the 5 immediate prior crops to calculate the benchmark yield (high and low yields are dropped) and (b) actual yield for the year. According to FSA, approximately 100,000 separate crop/county yields are used across all program commodities in any given year to compute ARC-CO payment rates. To determine ARC-CO county yields, FSA uses the following “cascade” approach:

(1) NASS county data are used if the county data set contained at least 30 observations with yields that account for 25% or more of the acres harvested in the county.

(2) If NASS data are unavailable, RMA county data are used, provided at least 5 yield observations exist for the county and account for more than 25% of FSA reported acreage in the county. RMA provides FSA a data file during late summer in the year following the year the crop is harvested.

(3) If neither NASS nor RMA data are available, yields are determined by FSA State Committees using a variety of sources, including NASS crop reporting district data and extension specialists.

According to FSA, NASS and RMA yield data covered approximately 90% of the base acres on which payments were made for the 2014 and 2015 crops. The remaining payments were based on State Committee determined yields.