The changes to farm programs included in the Bipartisan Budget Act of 2018 discussed recently were an unusual revision of farm policy both in timing and method (farmdoc daily, February 14, 2018). Congress agreed to add seed cotton as a covered commodity for ARC and PLC, as well as to make changes to the dairy Margin Protection Program. Congress usually does not open a farm bill prior to its expiration date, nor address only two commodities using an appropriations vehicle. It was the decision to reinstate cotton-based farm payments that is most notable given the history surrounding cotton assistance. Because the clear goal was to provide a price-based payment for cotton farmers, the revisions highlight one of the most persistent policy disputes in farm bill history. In light of that and with an eye towards farm bill reauthorization, this article begins a series reviewing and analyzing the policy concept whereby Congress writes crop prices into the statute for the purpose of determining farm commodity assistance.

A Brief History of Fixing Prices in Farm Programs

The effort to fix crop prices in farm programs can be traced to World War II when Congress revised the price supporting loan program it created in the Agricultural Adjustment Act of 1938 (1938 AAA). Known as the Steagall Amendments, Congress revised the flexible loan rate schedule in the 1938 AAA by fixing the loan rate at 85 percent of parity; this loan rate was increased to 90 percent of parity and was to remain in place for two years after the war. While it was a fixed loan rate, use of the parity calculation resulted in loan rates that did change depending on the ratio calculation used for parity. The fixed-percentage parity loan rates became one of the most contentious issues for farm policy in the decades following the war.

For a perspective on the historical movement of crop prices, Chart 1 traces marketing year average (MYA) prices for the three major commodities throughout farm bill history (1933-2016). The era from World War II through 1973 was defined by the parity system to calculate support for farm commodities. Importantly, the (generally) high, fixed loan rates were coupled with some form of production control during those years; controls usually based on acreage allotments that limited the amount that could be planted. The price spike in the early Seventies effectively ended the parity loan rate and production control system for all supported commodities when Congress revised farm programs in the Agriculture and Consumer Protection Act of 1973 (1973 Farm Bill). 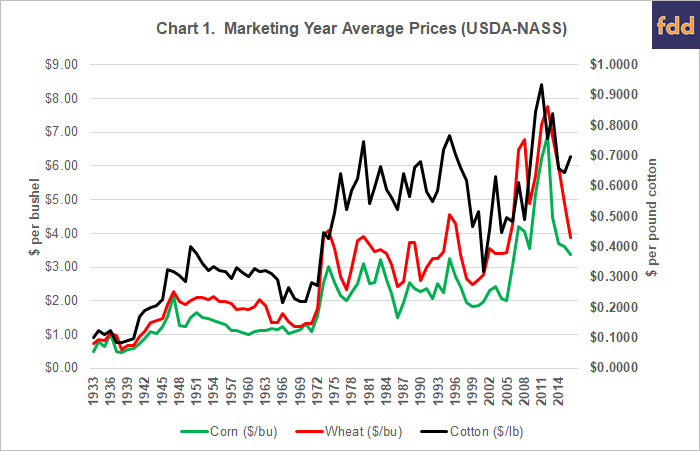 The 1973 Farm Bill contained key changes to farm policy that constituted the most substantial revision to the programs since being created in 1933. Congress created target prices and deficiency payments as an income support policy that was in addition to the long-standing price supporting loan system. Under this program of income support, if the average of market prices were lower than the target price a deficiency payment was triggered on the difference; that payment increased as prices fell and until they reached the loan rate. The initial target prices were: $1.38 per bushel for corn; $2.50 per bushel for wheat; and $0.38 per pound for cotton. Congress also included an escalator clause which would increase the target prices based on increases in the cost of production. Second, Congress replaced the acreage allotment system for commodities that received target prices with authority to USDA to require set-aside acres in times of overproduction.

Congress continued this target price system of support through four successive farm bills: 1977, 1981, 1985 and 1990. The market year average prices were initially calculated on a partial year basis but, to get a sense of the target price program in action, Chart 2 compares the target prices to the twelve-month MYA for each year of the era (1974-1995) and illustrates the increases through 1985. The target prices and loan rates were compiled from USDA’s Economic Research Service historic farm program data (USDA-ERS). Congress increased target prices in 1977 and then again with a schedule of increases in 1981. In the 1985 Farm Bill, Congress agreed to freeze target prices for the initial years of the bill with decreases in the later years. The Federal Agricultural Improvement and Reform Act of 1996 eliminated the target price program. 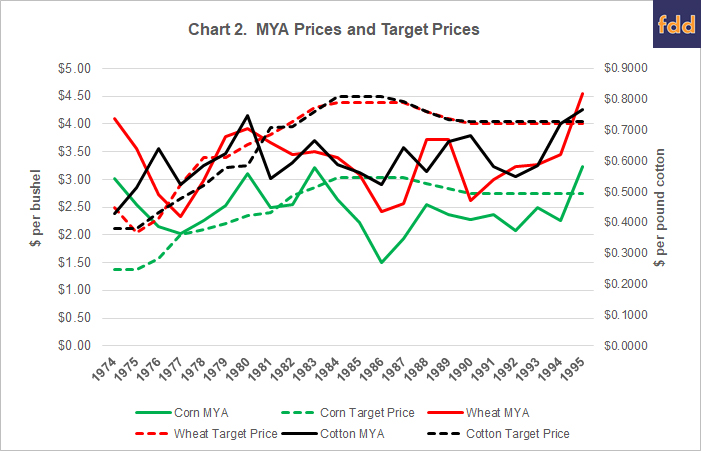 Comparing MYA prices to the target prices in Chart 2 provides a rough estimation of when payments were triggered and how large the deficiency payment would have been. Target prices above the MYA would result in payments, with larger payments resulting from the larger spread between the two. Because the price which Congress fixes in the statute determines whether a payment is made and the potential size of that payment, this fixed-price policy has always been plagued by a lack of transparency. This, in turn, raised questions about whether the target prices were at appropriate levels and whether the commodities receiving support were treated equally. Simply put, commodity prices are not the same for each of the crops and, at least in the case of cotton, not the same units (i.e., bushels vs. pounds).

Given that the target prices represented direct Federal assistance and, at least in this era the assistance was linked to which crop a farmer planted, concerns about transparency and fairness resonated. Lacking transparency, it is difficult to assess whether the assistance was equitable for the farmers of these different crops. The following are a sampling of methods for comparing target prices and evaluating whether Congress has picked favorites throughout the history of this policy. 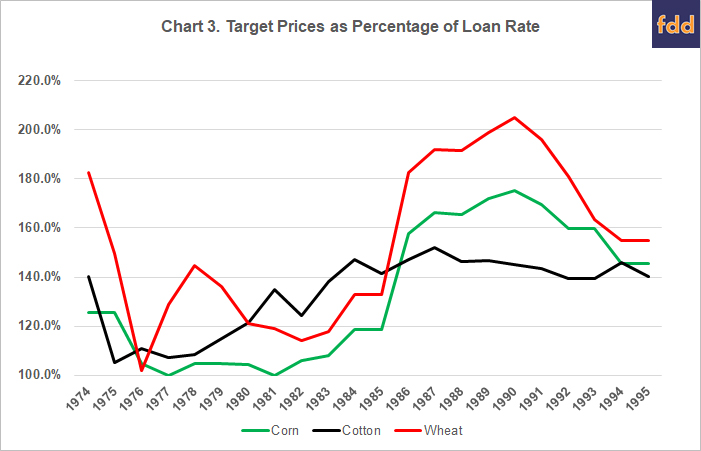 By this measure, wheat initially received the most favorable target prices of the three commodities. This situation held through 1981 when cotton appears to have received the more favorable target price and then wheat comes out ahead again after 1985. Chart 3, however, only measures the target prices against the loan rates which were also established by Congress and thus does not provide a complete answer to the question of whether the assistance was designed equitably.

Chart 4 provides a similar comparison. This time the target price is stated as a percentage of the MYA prices for each year (1974-1995). When the ratio is above 100%, the twelve-month MYA is above the target price and no deficiency payment would be expected; the lower the percentage the larger the expected payment. It adds some evidence that wheat received the more favorable target prices in the 1973 Farm Bill. Cotton’s target price appears more favorable in 1981, although wheat begins to catch up after a few years. Certainly, market prices for the crops would vary for different reasons and by different amounts each year. The concern is whether Congress is setting policy in a manner that treats each commodity in a similar manner. Ultimately, Charts 2 through 4 fail to provide any clear conclusion on the question of fairness. 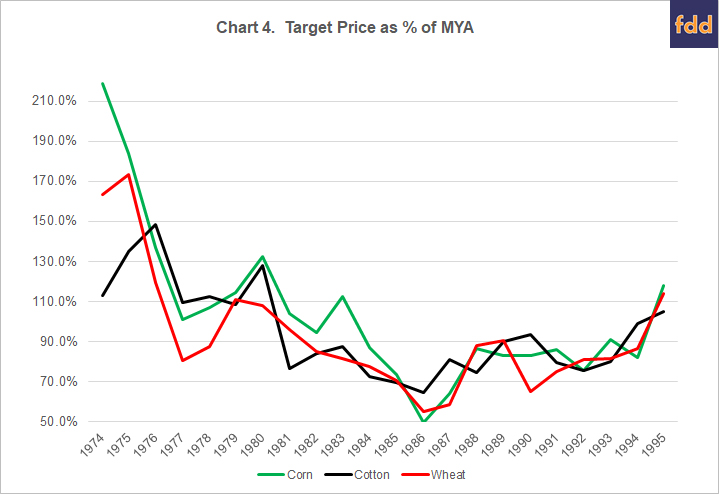 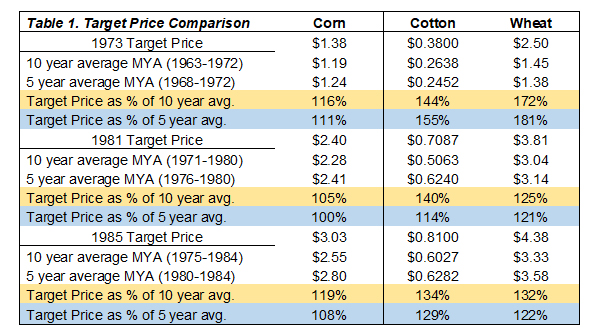 During the worst of the Eighties farm crisis, the 1985 Farm Bill revised target prices to the most equitable levels of the three bills but cotton received a target price 15 points or 21 points higher than corn compared to the 10 and five year averages (respectively). Wheat’s target price was 13 and 14 points higher. Throughout this troubled era Congress consistently provided corn with a lower target price than either cotton or wheat relative to historic market prices. The different levels for target prices would translate into different levels of assistance to farmers; cotton and wheat farmers would consistently receive larger payments than corn. Reasons for this discrepancy may have existed but, due to the lack of transparency in setting target prices, there was nothing to justify doing so. This differential treatment would have magnified concerns that the policy did not operate on a fair and equitable basis for all farmers receiving support.

The return of cotton-based assistance to the farm programs in the Bipartisan Budget Act of 2018 serves as a reminder of the long-running disputes over assistance programs that use Congressionally-fixed prices. It is clear from the comparisons that Congressionally-fixed price triggers were not established on an equitable basis in the initial iterations of the policy; the support they provided to farmers would not have been equitable either. It may add to this conclusion to know that the Member of Congress credited with creating the target price policy in 1973 was Senator Milton Young (R-ND) who was known as “Mr. Wheat” (Coppess, 2018; Collin and Collin, 2010). Similarly, the 1981 Farm Bill was part of the infamous Boll Weevil Democrats’ deal with President Reagan (farmdoc daily, March 16, 2017). Wheat and cotton received the most favorable target prices in those farm bills, respectively.

There are likely many other methods for measuring the fairness of target prices throughout the policy’s history and those will be explored in future articles. All methods will be challenged by the lack of transparency involved in setting target prices. The design of farm policy has real-world consequences for the farmers of the supported commodities, as well as the taxpayers who fund the programs; relevant topics when Congress debates reauthorizing the programs and future articles will further explore the myriad issues involved.

Jonathan Coppess, The Fault Lines of Farm Policy: A Legislative and Political History of the Farm Bill (U. of Nebraska Press, forthcoming 2018).