This article continues the discussion regarding fixed-price commodity policies in farm bills by comparing early target prices and costs incurred by farmers to produce supported crops (farmdoc daily, Feb. 22, 2018). The discussion in this article uses the historic Commodity Cost and Return estimates by the USDA Economic Research Service for corn, cotton and wheat for 1975 through 1995 (USDA-ERS Commodity Costs and Returns).

Background on Costs of Production

Pegging commodity assistance to the cost of production was one of the major issues from the beginning. In fact, the Congressional debate over the legislation that became the Agricultural Adjustment Act of 1933 became bogged down in the Senate over this dispute. The National Farmers Union (NFU) and Senator George Norris (R-NE) fought for a support calculation based on a cost-of-production calculation but they were opposed by the American Farm Bureau, the Roosevelt Administration and Southern Senators who wanted to peg supports to a ratio of prices and costs that used the 1909 to 1914 base period (Coppess 2018). The 1933 AAA ended up using the 1909-1914 base period ratio, which would eventually come to be known as parity, but the battle over using cost of production calculations continued. Challenges and concerns have always enveloped the cost of production calculation; questions about how to calculate costs, which costs to include in the calculation and whether costs (however calculated) are an appropriate basis for assistance. 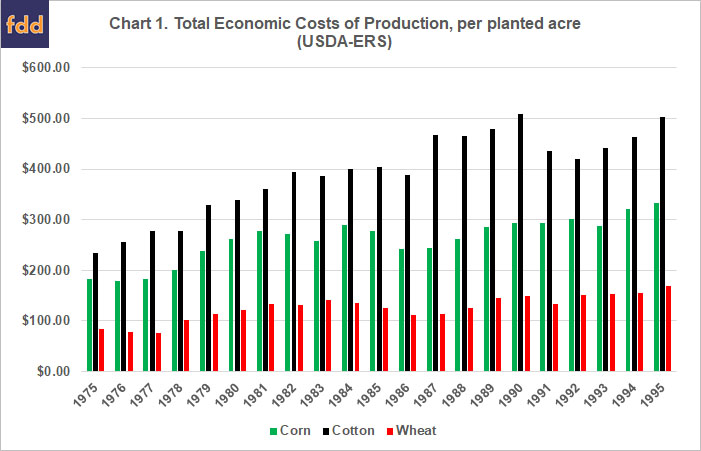 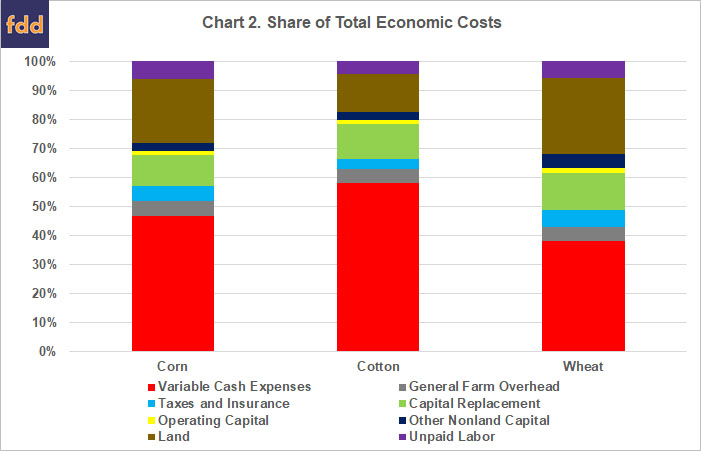 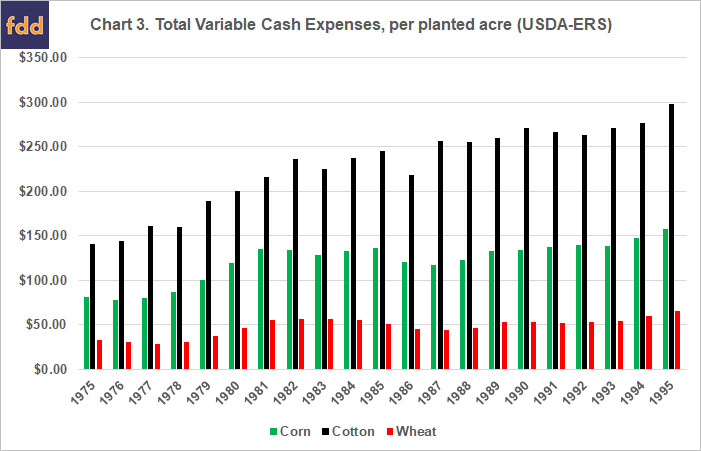 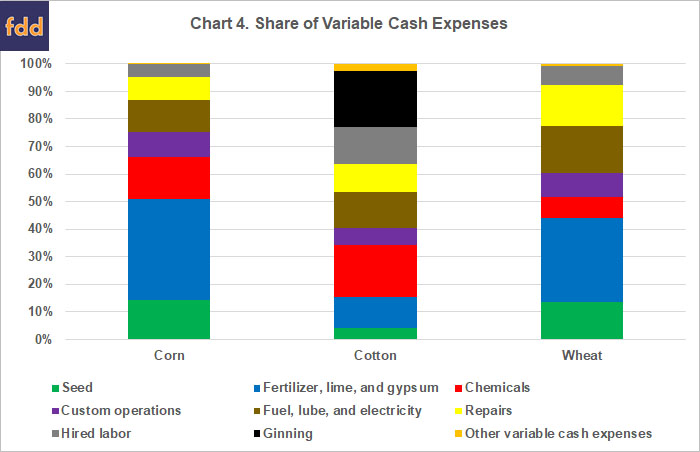 To attempt a comparison of target prices, units of output (yields) are needed; target prices are fixed on bushels-per-acre for corn and wheat and pounds-per-acre for cotton. Charts 5 through 8 use the national average yields per planted acre in the ERS data for each of the years 1975 to 1995; the comparisons use costs-per-planted-acre divided by the national average yields per planted acre. Chart 5 begins with a comparison between total economic costs of production and target prices. 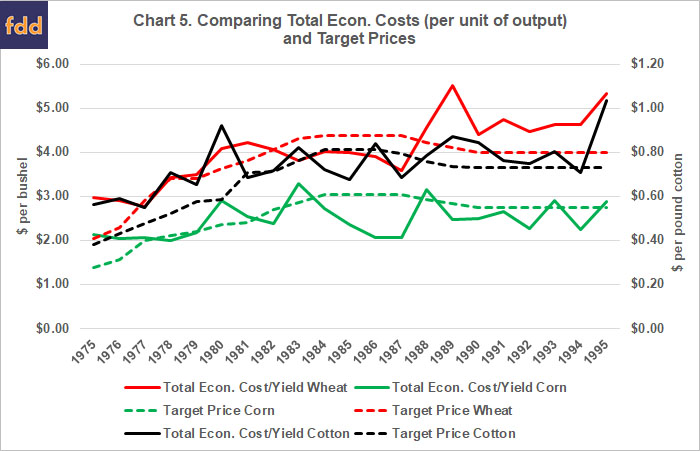 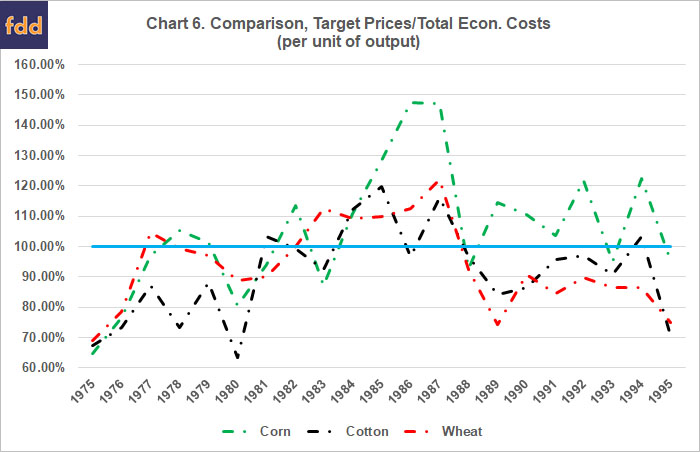 Chart 7 compares the variable cash expenses (per unit of output) with the target prices during the years 1975 to 1995 for corn, cotton and wheat. 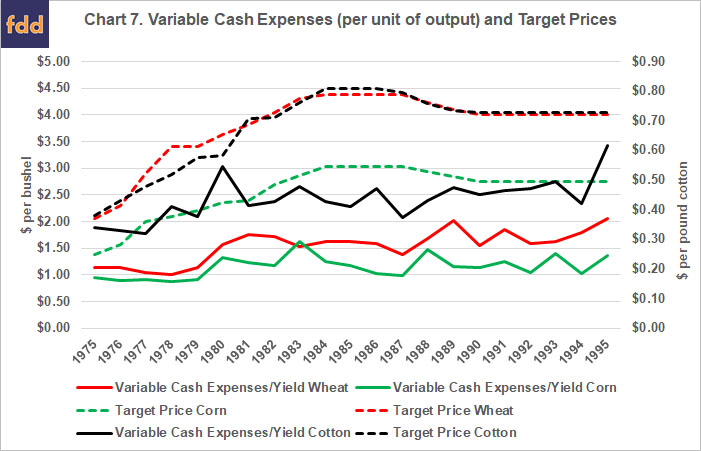 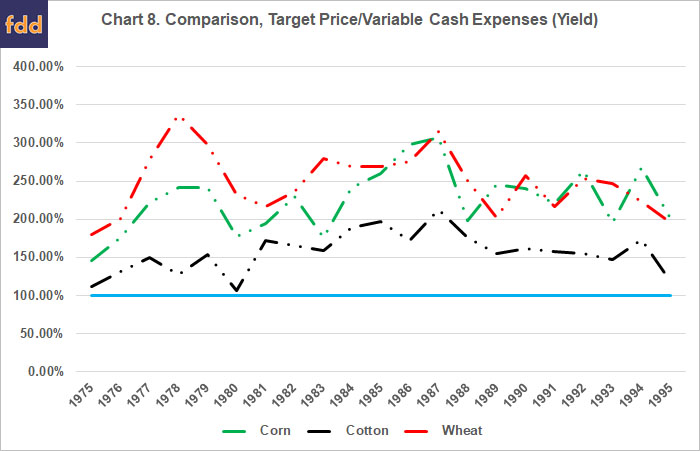 Finally, Table 1 provides a comparison of costs and target prices on five-year averages and an average for the entire timeframe (1975-1995). In this era, the 1977 and 1981 Farm Bills increased target prices. The 1985 Farm Bill froze target prices for the initial and decreased them in the final years. The target prices were frozen by the 1990 Farm Bill. 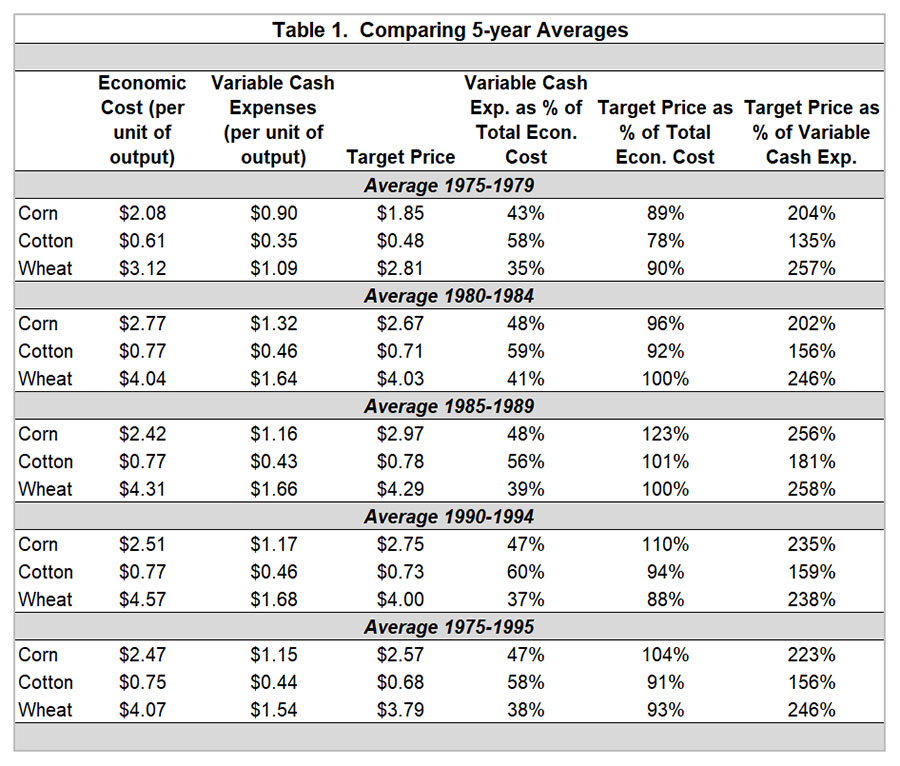 A concern with fixed-price policy–the target prices created by Congress in the 1973 Farm Bill and reauthorized in the 1981, 1985 and 1990 Farm Bills–is the lack of transparency as to how the prices are established. This lack of transparency makes it difficult to determine whether the target prices are set appropriately and whether they are equitable across commodities. Policy decisions impact whether payments are made, the size of the payments and whether farmers receiving support are receiving it on a fair and equitable basis. This could, in turn, have implications for production decisions and the market.

The costs incurred by farmers of the supported crops may provide a method for measuring target prices, as well as the policy decisions in Congress. The extent to which cost of production measures provide a reasonable benchmark for evaluating policy appears limited, however. The costs, themselves, lack transparency and raise questions about which costs are appropriate to consider and whether cost calculations are equitable across commodities. This is highlighted most clearly by the questions surrounding the inclusion of a cost unique to cotton (ginning). Reviewing costs of production adds points of reference to the evaluation of fixed-price farm policy but additional information and analysis is needed.

Coppess, J. "The Fault Lines of Farm Policy: A Legislative and Political History of the Farm Bill." U. of Nebraska Press, forthcoming 2018.

USDA. "USDA Provides Targeted Assistance to Cotton Producers to Share in the Cost of Ginning." Press Release No. 0140.16. https://www.usda.gov/media/press-releases/2016/06/06/usda-provides-targeted-assistance-cotton-producers-share-cost