Trends in the financial position of Illinois farms are presented in this article. Overall, farms gained financial strength from 2006 to 2012. Since 2012, working capital has declined. The net worth and debt-to-asset position of most farms remain strong, but per acre net worth has decreased and the debt-to-asset ratios have increased in recent years. Those are worrisome trends. Future financial performance depends on returns. Likely financial performance given differing commodity prices are presented at the end of this article.

Table 1 shows a balance sheet averaged over farms enrolled in Illinois Farm Business Farm Management (FBFM). Farms included in this summary are sole proprietorships and have balance sheet information that is certified as being complete by FBFM field staff. The balance sheet information is as of the end of 2016. Information for 2017 has not been summarized and made available to the public at this point in time. Asset values in Table 1 are valued at their market values and are stated on a per acre basis. Percentages also are given which state that category’s value as a percentage of total assets or, equivalently, as a percent of total liabilities plus net worth. Long-term assets, for example, are 55% of total assets, indicating that a high proportion of a farm’s assets are long-term. Furthermore, total liabilities are 21% of total assets (see Table 1), indicating that the average debt-to-asset ratio is .21.

At the end of 2016, there was $4,850 per acre in total assets. Liabilities totaled $1,035 per acre. The debt-to-asset ratio for these Illinois farms is .21, which compares to a .13 debt-to-asset value for the entire U.S. agricultural sector as reported by the Economic Research Service (ERS), an agency of the U.S. Department of Agriculture (ERS, Assets, Debt, and Wealth). Both the FBFM and ERS debt-to-asset ratios are low relative to historical levels.

The remainder of this article provides trends from 19966 through 2016 on each components of Table 1’s balance sheet. When examining trends, three periods are apparent:

In general, balance sheet items strengthened throughout the 2007-2012 period relative to the relative stable 1996-2006 period. The 2013-2016 period is associated with stability in some balance sheet categories and deterioration in others. 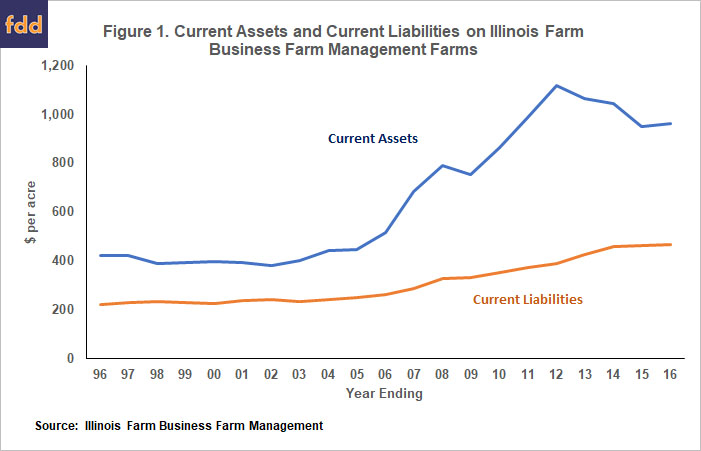 Lower commodity prices and lower incomes contributed to the decline in current assets. 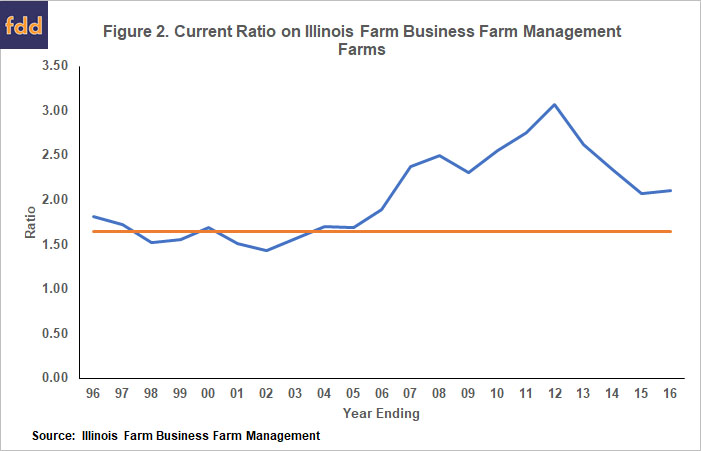 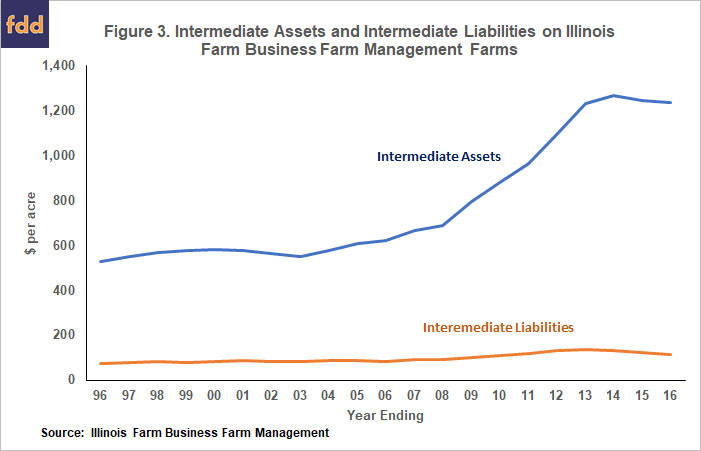 Intermediate asset values increased in each year during the 2007-2012 period, reaching $1,093 per acre in 2012. During the period, farmers used disposable cash to purchase machinery, leading to higher machinery values.

On Illinois grain farms, much of the value in long-term assets is associated with farmland. However, Illinois farmers tend to own a relatively small percentage of their land base. Of the farms described in this article, percent of acres owned is about 25% of farmed acres. Hence, the per acre values in Figure 4 have about .25 owned acres of farmland in its value. 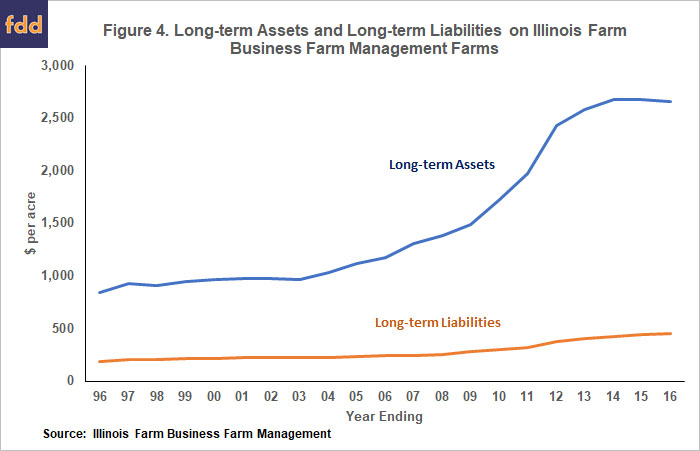 When valuing farmland, Illinois FBFM uses a conservative approach. Farmland is valued at about three-quarters of market value. As a result, long-term assets – and total assets as well – will be conservatively valued. 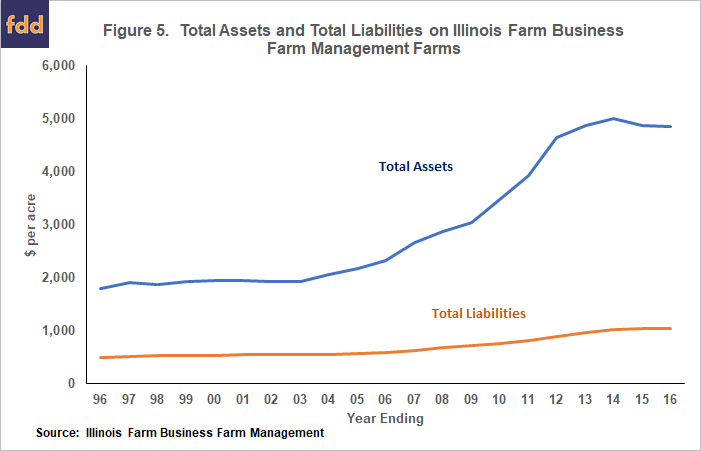 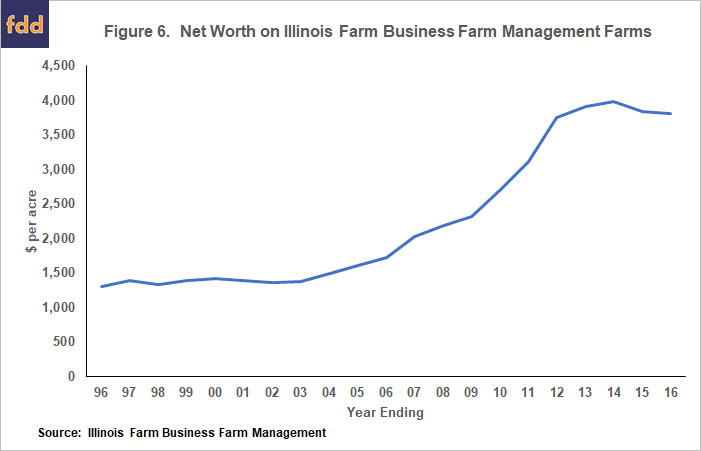 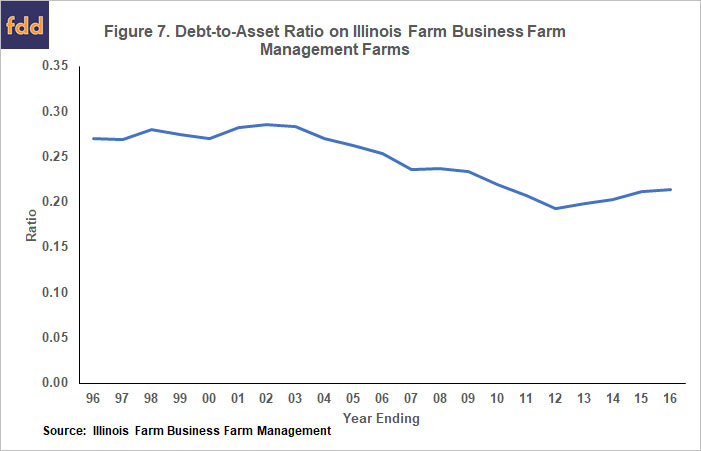 Overall, farm balance sheets remain strong but there are some worrisome trends. In recent years, working capital has been declining and prospects are that economic conditions will not be conducive to building working capital in 2018. A poor year characterized by trend yields, mid-$3.00 corn prices, and mid-$9.00 soybean prices would be associated with large declines in working capital (see farmdoc daily, January 30, 2018).

The net worth and debt-to-asset position remains strong but are not improving. Net worth per acre has been declining slightly in recent years and debt-to-asset ratios have edged up. There is still are financial reserves suggesting that many farms could withstand several adverse years.

The above analysis includes data through 2016. While 2017 data has not been released yet, one can make reasonable projections. Net farm incomes in 2017 were projected to be below 2016 levels (see farmdoc daily, November 21, 2017). Those lower net incomes likely lead to continued deteriorations in working capital on most farms. Net worth likely will show small declines and average debt-to-asset ratios likely will increase. Overall, farms likely still are in a strong position at the end of 2017, but some financial deterioration has continued to occur.

The above analysis is based on averages. There will be farms that face much greater difficulties than those described by these averages. Farms that have a higher proportion of their farms cash rented will face worse situation than depicted above. The 21% of the acre that is owned for the “average” farm provides a great deal of financial stability that does not exist for those the rent more than 90% of their farming operations. Moreover, younger operators likely face more adversity as they have not built up a base of owned land or other financial reserves.

The question then is what the financial position will look like in the future. Much will depend on prices and yields. Below is a characterization of results in the future given that yields are near trend levels. Prices given below represent market year average (MYA) prices:

Obviously, yields come into play in determining returns and financial performance. For example, above average yields would counter some or all the impacts of lower prices, as has happened in recent years (see farmdoc daily, November 21, 2017). At this point in time, the dire situation of below $3 corn prices and below $9 soybean prices appears improbable, but this is agriculture and adverse events have happened in the past. Alternatively, there are scenarios where higher prices can occur resulting in increases in financial strength. Given current expectations, a most likely scenario is continuing tight cash flows, declines in working capital, and increases in debt-to-asset ratio. Time will tell.

Schnitkey, G. "Forecast of 2017 Net Income on Grain Farms in Illinois: Lower than in 2016 but Better Than Expected." farmdoc daily (7):215, Department of Agricultural and Consumer Economics, University of Illinois at Urbana-Champaign, November 21, 2017.

Schnitkey, G. "2018 Grain Farm Income: The Need for Above Trend Yields or Higher Prices to Break-Even." farmdoc daily (8):15, Department of Agricultural and Consumer Economics, University of Illinois at Urbana-Champaign, January 30, 2018.