Cost of Federal Crop Insurance is an on-going farm policy issue. President Trump proposed several changes to reduce its cost in his Fiscal Year 2019 budget. The changes include reducing the all insurance program subsidy from the 62% rate of recent years to 48%. A long standing goal of crop insurance is to insure a large share of acres to reduce demand for ad hoc disaster assistance. Reducing the subsidy rate may reduce share of acres insured and thus conflict with this policy goal. To provide one perspective, historical trends are examined for insured acres and premium subsidy aggregated across barley, corn, cotton, oats, peanuts, rice, sorghum, soybeans, and wheat. Insurance contracts have existed for these crops since 1989, the first year electronic data are available from the U.S. Department of Agriculture (USDA), Risk Management Agency. A strong relationship exists. The premium subsidy rate explains 88% of the annual variation in share of acres insured for the 9 crops. Based on the estimated equation, the President’s proposed 14 percentage point reduction in premium subsidy rate is associated with a 17 percentage point decline in insured share of acres planted to the 9 crops, from the 86% current share to 69%.

The federal premium subsidy rate for the 9 crops was 25% in 1989 (see Figure 1). After jumping to 57% in 1995 following passage of the Federal Crop Insurance Reform Act of 1994, the rate declined to 34% by 2000. It then jumped to 58% in 2001 after the Agricultural Risk Protection Act of 2000 authorized a substantial increase in the subsidy rate. Since 2001, the subsidy rate for the 9 crops as a group has slowly increased by an average of one-third of a percentage point per year, reaching 64% in 2017. During this period, the 2008 farm bill authorized enterprise insurance for all acres of a crop in a county. Its subsidy rate is as high as 80% at coverage levels from 50% to 70%. The increase in subsidy rate since the 2008 farm bill likely reflects farms buying the more subsidized enterprise insurance. Farms could also be buying more subsidized lower coverage levels, but average coverage level bought for the 9 crops has generally increased slightly or remained stable over the last few years. 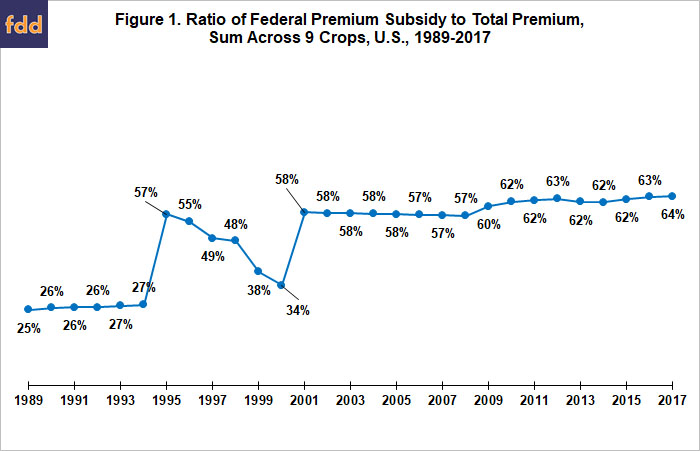 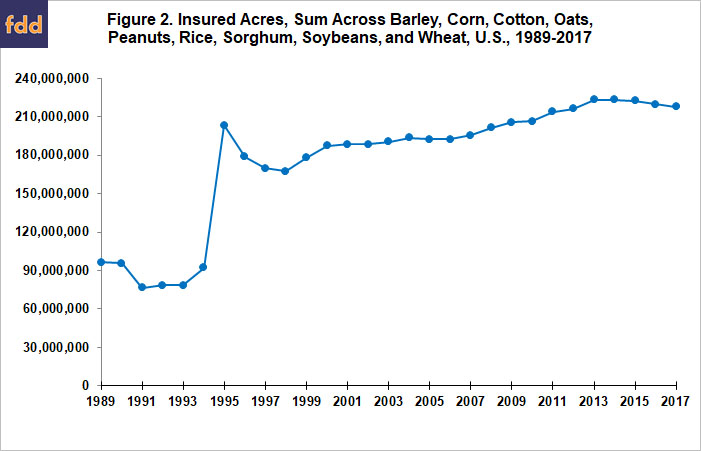 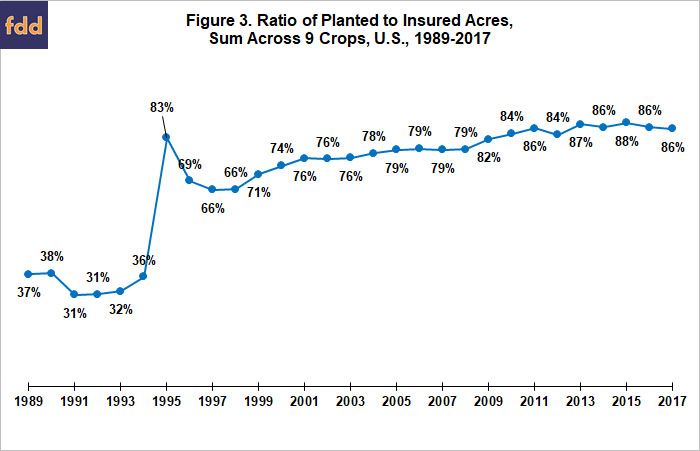 A linear regression line was estimated with share of acres insured regressed on share of premium subsidized by the federal government. A strong relationship exists (see Figure 4). The subsidy rate explained 88% of the variation in annual share of acres insured. A squared subsidy term was added to the linear regression to assess if a nonlinear relationship existed. R2 did not increase significantly, implying a linear fit is likely best. The coefficient estimated for the premium subsidy rate was +1.3. It was significant with 99.9% statistical confidence. A +1.3 coefficient implies that each percentage point increase in the premium subsidy rate is associated with a 1.3 percentage point increase in the share of planted acres insured (see data note). 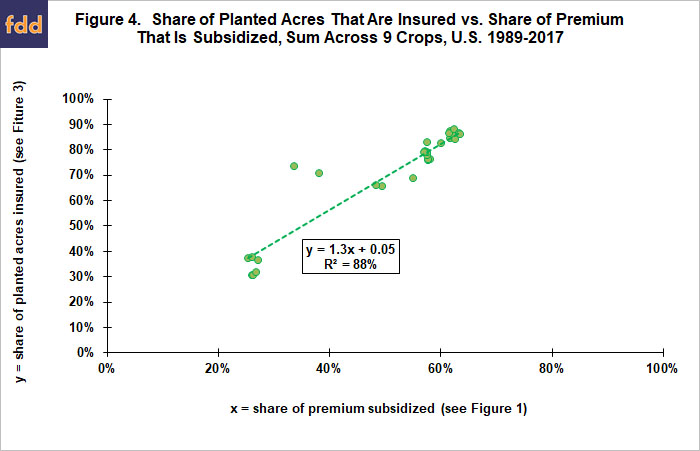 The Federal Crop Insurance Reform Act of 1994 required that crop insurance be purchased to qualify for commodity program payments and selected other federal programs. It was effective for the 1995 crop but subsequently rescinded for future years. A dummy variable that captured this policy change was not statistically significant and thus did not improve upon the subsidy rate’s explanatory power of share of insured acres.