Corn planting progress in the U.S. is always a staple of market conversations this time of year. The cold and wet conditions (snow!) in the Corn Belt during the first half of April have severely limited fieldwork and corn planting. Naturally, there is great interest in what this implies for the timeliness of planting the 2018 corn crop in the U.S. Whether present conditions translate into substantial planting delays depends critically on the rate that corn planting can proceed once conditions improve. There has undoubtedly been substantial investment in large and technically sophisticated corn planters during the last decade. In addition, GPS auto-steer systems make it feasible to operate planters for more hours per day. As a result, it is not uncommon to hear the refrain that the entire Corn Belt can be planted in five good field days. The purpose of this article is to estimate the minimum number of suitable field days required to plant the U.S. corn crop based on historical planting progress data. Our work builds upon the analysis of issues related to the timeliness of corn planting in several previous farmdoc daily articles (June 3, 2011; March 23, 2012; April 25, 2013; May 22, 2013; April 30, 2014; May 20, 2015).

Since we are interested in the minimum number of days that it is possible to plant the U.S. corn crop, we focus on weeks with the highest acreage planted per suitable field day. In other words, we want to know how fast the corn crop can be planted based on the highest rates of planting progress in the historical record. This should be kept in mind when considering the results of the analysis. Whether producers can actually maintain peak week progress for an extended period is uncertain. In addition, we average the progress per suitable field day for the two highest weeks each year in order to smooth out some outliers that appear in the single highest week each year. 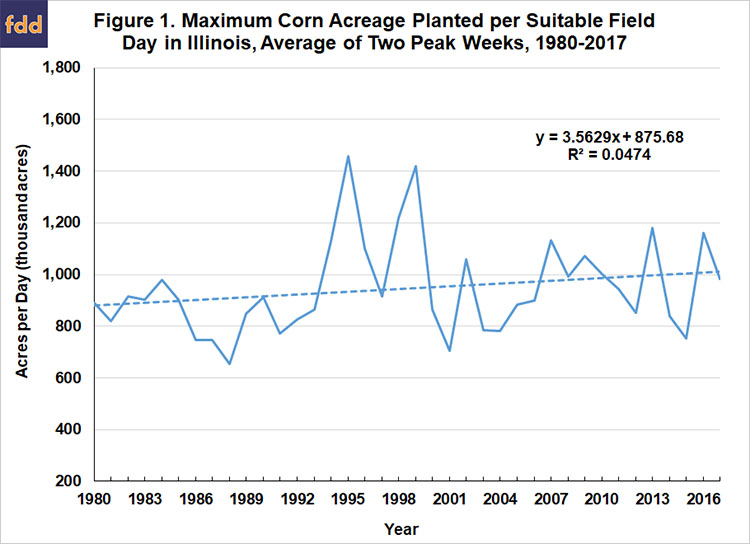 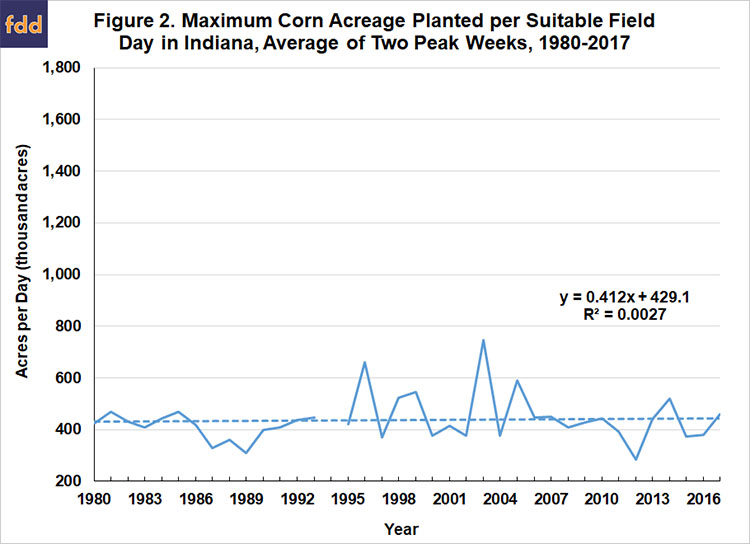 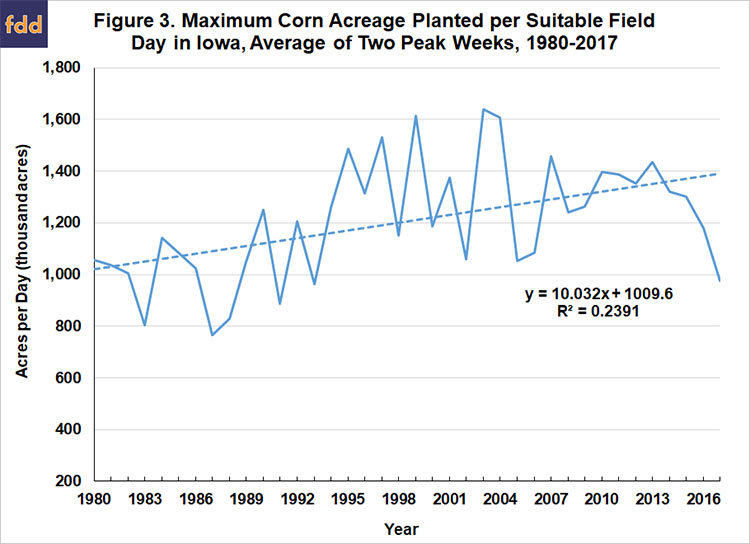 The estimates in Figures 1-3 show that maximum planting rates per suitable field day in the heart of the Corn Belt have not increased in a manner consistent with conventional wisdom. If we compare the early 1980s to the last couple of years, there is very little increase in the maximum rate at which corn acreage has been planted. This does not mean that maximum rates are absolutely capped at the estimated rates. It is possible that investment in planting equipment in the last decade has created extra capacity that simply has not been fully utilized. While this is a possibility, it could also imply an over-investment in planting equipment if this extra capacity is rarely used. 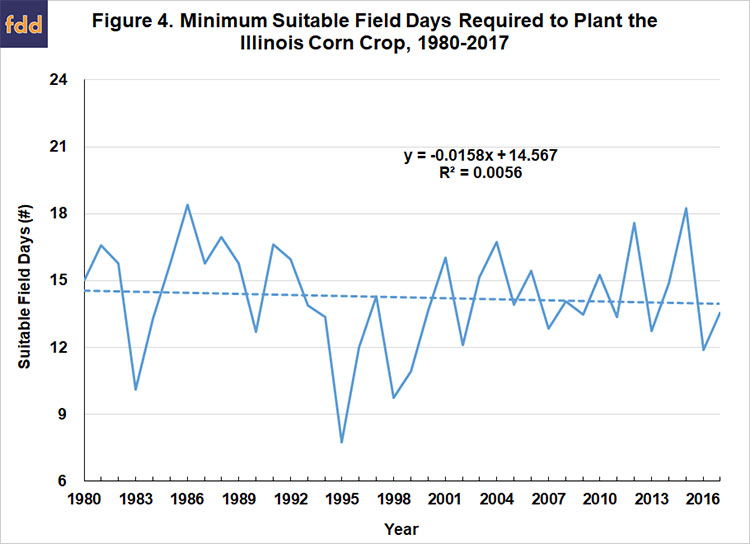 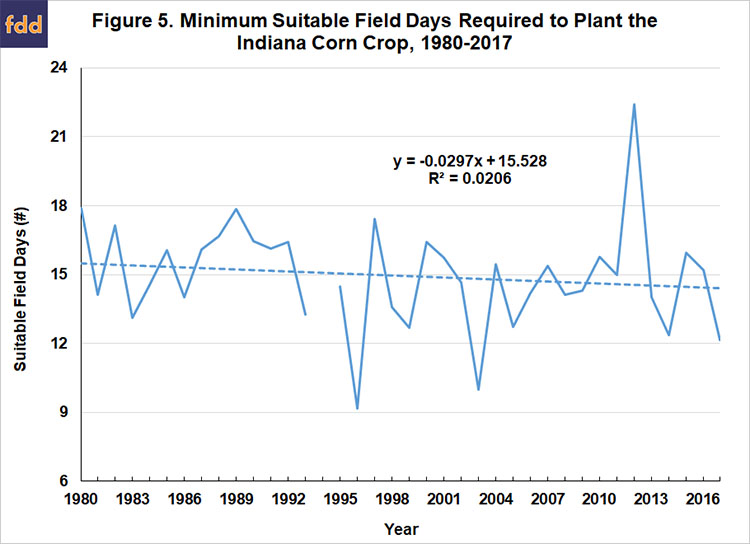 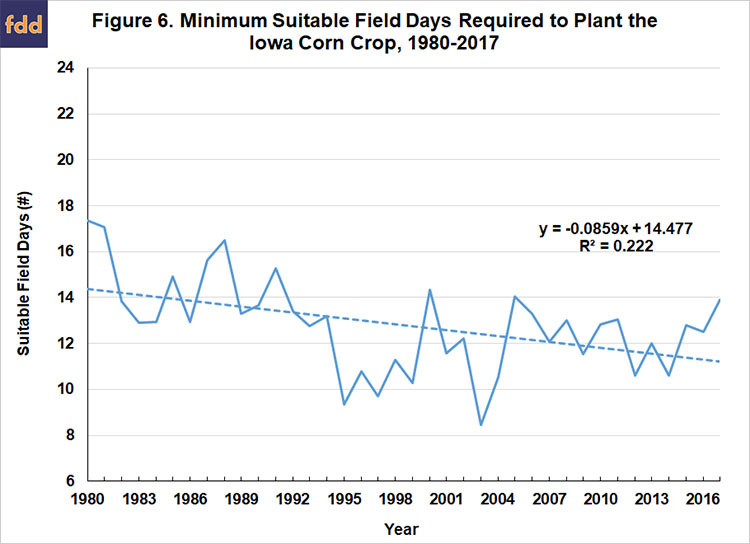 Conventional wisdom suggests that the U.S. corn crop can be planted in just a few days, perhaps as few as five suitable field days. This thinking is spurred on by the large size of modern planters that can obviously plant many more acres than the smaller planters of the past. However, this conventional wisdom is not borne out by historical data on planting progress for three states in the heart of the U.S. Corn Belt–Illinois, Indiana, and Iowa. We compute the minimum number of days required to plant the corn crop in each of the three states going back to 1980, assuming that planting progresses at the maximum rate per suitable field day in each year. The stability and similarity of the minimum number of days required to plant the corn crop is striking. While there is some variation in the estimates over time, on average, producers in Illinois, Indiana, and Iowa need about 14 suitable field days, or two weeks, to plant the corn crop based on maximum daily rates of planting progress. Assuming the three states are representative of the entire Corn Belt, 14 days is also an estimate of the minimum number of suitable field days needed to plant the entire U.S. corn crop. These results have important implications for expectations about the timeliness of corn planting in 2018, which has obviously gotten off to a very slow start. We plan to flesh out these implications in a farmdoc daily article next week.

Irwin, S., and D. Good. "Rapid Corn Planting Progress, But Well Below the Record Pace." farmdoc daily (3):98, Department of Agricultural and Consumer Economics, University of Illinois at Urbana-Champaign, May 22, 2013.

Irwin, S., and D. Good. "How Much of the 2013 Corn Crop Will Be Planted Late?" farmdoc daily (3):78, Department of Agricultural and Consumer Economics, University of Illinois at Urbana-Champaign, April 25, 2013.

Irwin, S., and D. Good. "How Much Impact Will Early U.S. Corn Planting Have on Potential Yield?" farmdoc daily (2):55, Department of Agricultural and Consumer Economics, University of Illinois at Urbana-Champaign, March 23, 2012.